IRSYAD FATWA SERIES 234: IS IT TRUE THAT THE SIN FOR SLANDER IS GREATER THAN THE SIN OF MURDER? 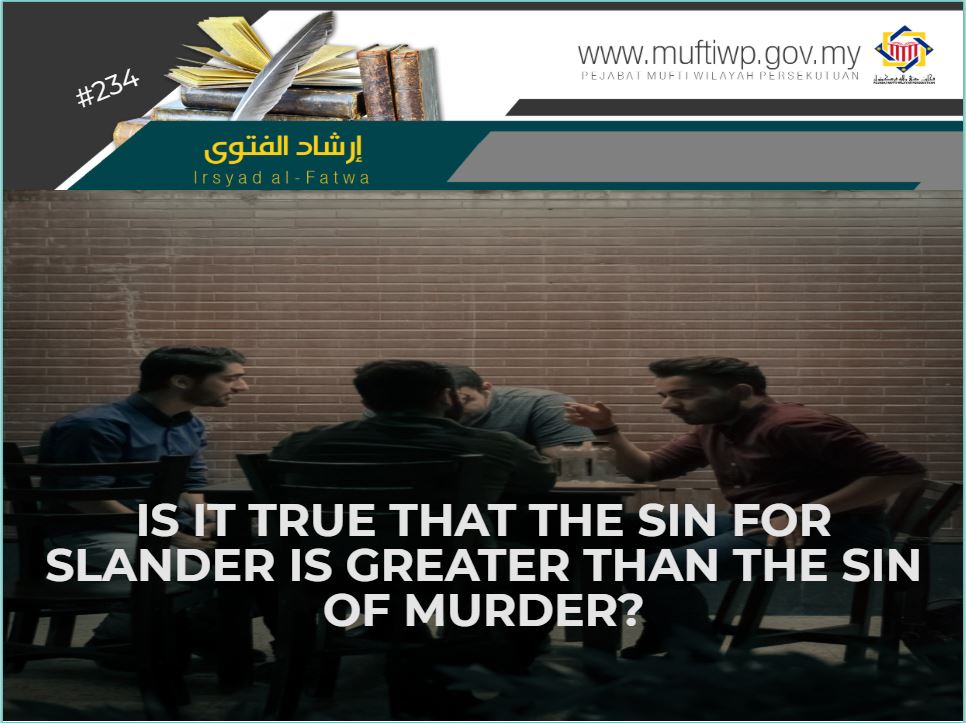 Assalamualaikum. We usually hear the phrases of ‘the sin of slander is greater than murder’ and some even say ‘it is better to commit murder than slander’.

The statements or claims about the sin of fitnah (slander) with the meaning of making false accusation towards someone is a greater sin than murder is widespread in our society today.

Advices and precautions are given against the dangers of slander and how great the sin is for someone to invent false news. They say this by referring to two verses from the Quran to support their claims:

“And fitnah is worse than killing.”

“And fitnah is greater than killing."

InshaAllah, with this opportunity we will explain the real meaning of both Quran verses in the context of the whole verse and from its siyaq al-ayat (the order of before and after of the verse), along with commentaries from renowned commentary scholars.

The Context for the Revelation of the Verse

For verse 191 Surah al-Baqarah, the full verse is:

“And kill them wherever you overtake them and expel them from wherever they have expelled you, and fitnah is worse than killing. And do not fight them at al-Masjid al- Haram until they fight you there. But if they fight you, then kill them. Such is the recompense of the disbelievers.”

While for verse 217 of the same surah, the full verse is:

“They ask you about the sacred month - about fighting therein. Say, "Fighting therein is great [sin], but averting [people] from the way of Allah and disbelief in Him and [preventing access to] al-Masjid al-Haram and the expulsion of its people therefrom are greater [evil] in the sight of Allah. And fitnah is greater than killing." And they will continue to fight you until they turn you back from your religion if they are able. And whoever of you reverts from his religion [to disbelief] and dies while he is a disbeliever - for those, their deeds have become worthless in this world and the Hereafter, and those are the companions of the Fire, they will abide therein eternally.”

Here we include the commentary and the definition of the word fitnah that is stated in both verses above:

The word fitnah in the verse والفتنة أشد من القتل is shirk, for the verse is explaining about the opposition of the musyrik disbelievers towards Mu’mins, trying to turn them back into disbelievers, this is worse and more dangerous then killing him while he’s steadfast in his religion (Islam). He also wrote Mujahid’s opinion that states the same meaning for the verse. (Refer Jami’ al-Bayan fi Ta’wil al-Qur’an, 3/565)

According to him, this verse is revealed, detailing about a companion whose name is Waqid bin Abdillah at-Tamimiy RA that has killed ‘Amru bin al-Hadramiy in the end of Rejab (one of the sacred months) in an expedition with a few other companions, in an effort to handle the opposition of the musyrikin Quraish in Mecca.

Thus, fitnah in this verse refers to the effort by the disbelievers trying to force the Muslims to return as disbelievers, and it is a greater harm compared to the Muslims’ response in fighting them back even in the sacred months. (Refer Tafsir al-Qurthubi, 2/351 and 3/46)

Syeikh as-Sa’di said, going to war in the sacred months in the Holy land of Mecca is one mafsadah, however, due to the fitnah done by the musyrikin, that is preventing humans from Allah’s religion and committing shirk, their act is a greater mafsadah. Hence, going to war with them in that situation is permitted.

From this verse, a famous Islamic legal maxim is established, which is, taking or choosing a lesser harm to prevent a greater harm. (Refer Taysir al-Karim ar-Rahman, 1/89 and 1/97)

As a conclusion, the two verse form the Quran regarding fitnah do not gives the meaning of slandering other people, such as accusing of zina without proof, is not a greater sin than murder. The term fitnah in these verses’ context refers to the musyrikins’ opposition towards the Mu’min in terms of the shirk that they did towards Allah SWT.

The assumption of the sin of slander such as falsely accusing someone is a greater sin than murder is untrue and does not reflect what is stated in the Quran.

Understanding Al-Quran must be based on the commentaries of reliable sources of renowned scholars, and not just based on assumptions (zhann) or blind faith in what other people say without our own study and research.