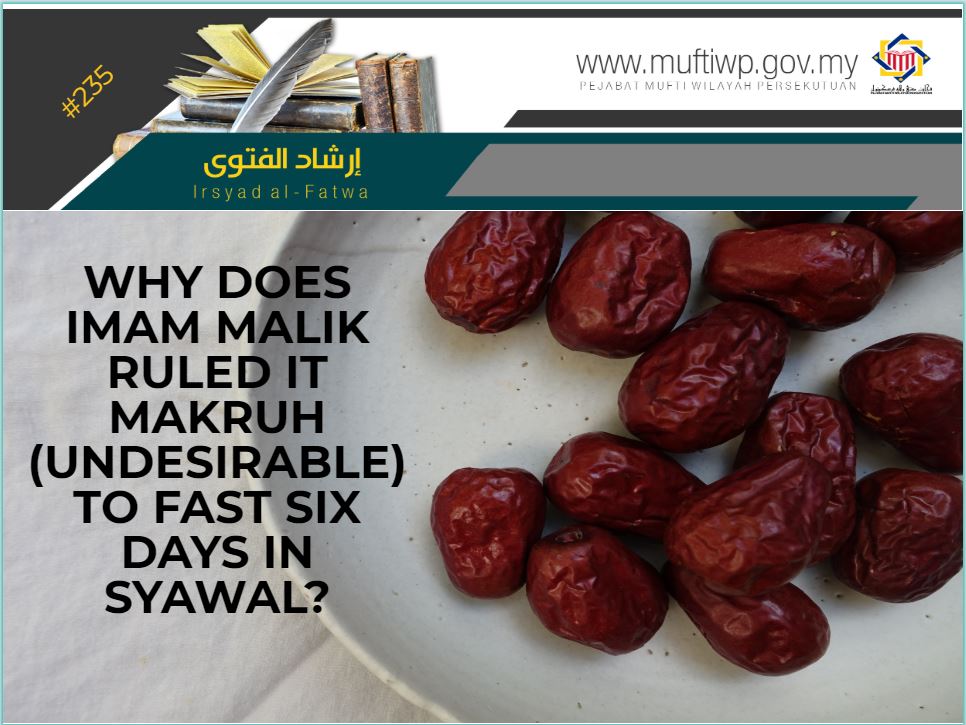 Assalamualaikum SS Datuk Mufti. Why does Imam Malik, ruled fasting six days in Syawal as makruh (undesirable) when there is a sahih (sound) hadith that sanctioned it and states its benefits?

The sanctioning of fasting six days in Syawal is tsabit through a Sahih Muslim hadith from Abu Ayyub al-Ansari RA, where the Prophet PBUH said:

“He who observed the fast of Ramadan and then followed it with six (fasts) of Shawwal. It would be as if he fasted perpetually.”

Mazhab Hanafi, Syafi’e and Hanbali agreed that fasting six days in Syawal is an encouraged sunnah according to the above hadith. (Refer Bada’ie as-Sona’ie, 2/78; Nihayatul Muhtaj, 3/208 and Al-Mughni, 3/176)

However, according to mazhab Maliki, in a narration from Imam Malik bin Anas, he never saw any scholars and the people of fiqh that perform the said fasting, and the narration from the salaf about the six days of fasting in Syawal did not reach him. There are also some scholars that ruled it undesirable, fearing that the people that do not have any knowledge would think that the fasting is part of Ramadhan. (Refer Syarh az-Zarqani ‘ala al-Muwatta’, 2/297)

In mazhab Maliki, an ahad hadith (a hadith narrated by only one narrator) cannot be accepted unconditionally without the support of the practise by the people of Medina, for they are the people that are closest to the Prophet PBUH, thus, they understand whatever the Prophet PBUH did during his lifetime. Imam Malik as a people of Medina found that the Medina people themselves did not fast six days in Syawal, even though there’s a hadith that sanctions it.

Furthermore, according to Dr Nu’man Jughaim, the fatwa by Imam Malik is viewed from Maqasid Syari’ah, where the prohibition of fasting in Syawal will close the doors of bid’ah practises that are very important in Islamic law. Moreover, this is an example of a conclusion drawn from a hadith with an ahad status (one, sole).

When commenting on Imam Malik’s statement saying that there are no scholars in his time that practise the six days of fasting, Imam al-Nawawi said, when something is sunnah and tsabit, even when the sunnah is neglected by some or all people, it should not be renounced or abandoned.

In our opinion, Imam Malik’s opinion is not suitable to be practised for the ‘illah that he used (worried that people would consider the six days of fasting as a part of Ramadhan) is not an issue now. The public now understands the differences between the obligatory fasting in Ramadhan and the sunnah fasting in Syawal.

As a conclusion, Imam Malik considers fasting six days in Syawal is makruh and it is not sunnah, for the hadith that sanctioned it is of the ahad status and that it is not practised by the people of Medina during his time, for the practise by Medina people is an important evidence in his mazhab. It is also ruled makruh, because he worried that people would consider it obligatory and as a part of Ramadhan.

However, this argument is rejected by the other three mu’tabar mazhab, which are; Hanafi, Syafi’e and Hanbali, for the hadith is sahih and sarih and is enough as an evidence without the support of the practise of the people of Medina even if its status is ahad. The worry that people could not differentiate between Ramadhan and Syawal is no longer applicable now.