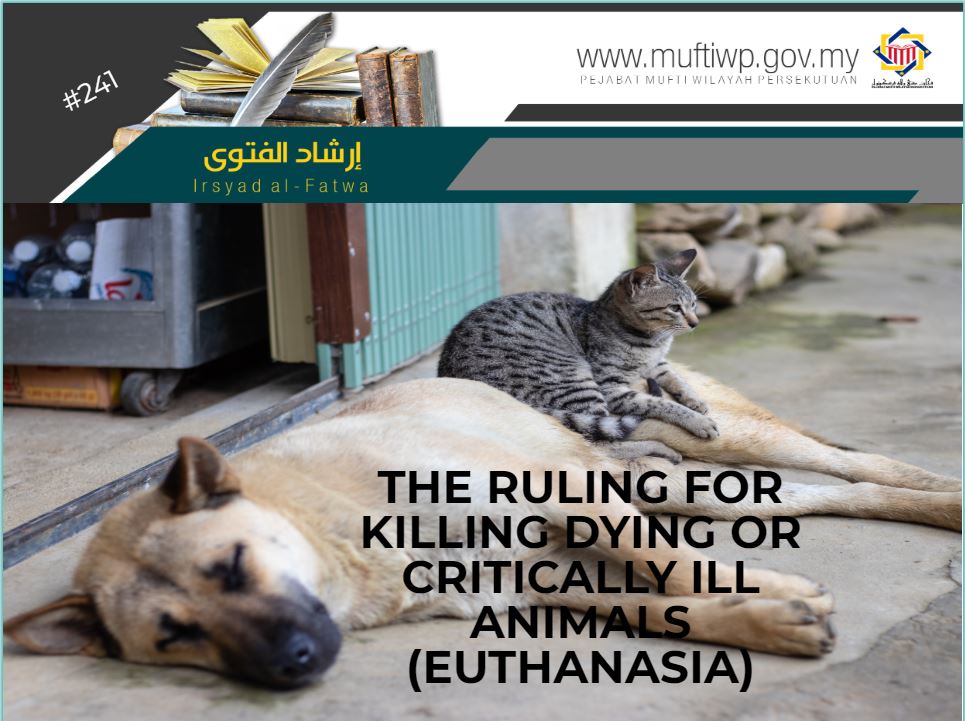 Assalamualaikum SS Dato’ Seri Mufti. What is the ruling for killing abandoned animals on the street that are critically ill, with the purpose of reducing their sufferings? That is all, thank you.

The Principle of Ihsan Even Towards Animals

Allah SWT has set the principle of ihsan for all kind of things. The Prophet PBUH said:

“Verily Allah has enjoined goodness to everything; so, when you kill, kill in a good way and when you slaughter, slaughter in a good way. So, every one of you should sharpen his knife, and let the slaughtered animal die comfortably.”

There is a tsabit from the hadith of the Prophet PBUH that states a woman is thrown into hell for not having compassion towards a cat:

"A woman entered the (Hell) Fire because of a cat which she had tied, neither giving it food nor setting it free to eat from the vermin of the earth."

The life of every animal should be protected and should not be killed arbitrarily. The Prophet PBUH said:

"Whoever kills a small bird for no reason, it will beseech Allah on the Day of Resurrection saying: O Lord, so and so killed me for no reason. And he did not kill me for any beneficial purpose."'

The Ruling of Euthanasia for Dying and Critically Ill Animals

Based on the ihsan principle, it is necessary for us to discuss the issue of killing animals that are dying or are critically ill (euthanasia), to reduce their sufferings. In this issue, several opinions from the fuqaha’ is stated.

According to Syeikh Haskafi, it is permitted to slaughter cats or dogs for any benefits, and it is better to kill dogs that are dying. Syeikh Ibn ‘Abidin states, a critically ill cat should be slaughtered to lesson the pain. Syeikh Tantawi explains that the permissibility is not limited to only dogs. (See Ad-Dur al-Mukhtar wa Hasyiyah Ibn ‘Abidin, 6/474)

Al-Fatawa al-Hindiyyah states, critically ill cats should be slaughtered using a sharp knife. There is also a fatwa that permits the killing of critically ill donkeys that could no longer benefit humans and to lessen the pain. There is another fatwa stating that if in a village, there are too many dogs that bring harm to the villagers, then the owner of the dogs can be asked to kill his dogs. If he refuses, the matter can be brought in front of a qadhi, so that the owner will be instructed to obey the order. (See Al-Fatawa al-Hindiyyah, 5/360-361)

Syeikh al-Dardir said that it is permitted to slaughter donkeys or mules that are critically ill and have no hope to recover, it is sunnah to end the sufferings. (See Syarh Mukhtasar al-Khalil wa Hasyiyah Dasuqi, 2/108)

Syeikh al-Buhuti and Syeikh al-Khalwati said that it is not permitted to slaughter animals for purposes other than for it to be eaten or getting benefit from it, such as to give the animal rest (from pain), even if the animal is in incredible pain. (See Kasyaf al-Qina’, 1/55 and Hasyiyah al-Khalwati ‘ala al-Muntaha al-Iradat, 5/509)

Syeikh Ibnu ‘Uthaimin when asked about animals that are hit by cars on the road, is it necessary for them to be killed? He answered it is prohibited to kill them, for it does not fall under our responsibility, but we should hope Allah SWT would heal them. (Refer Liqa al-Bab al-Maftuh, 2/16)

From the opinions of fuqaha above, we hold the opinion that euthanasia on sick animals is impermissible, for it still falls under the category of killing without reason under Islamic law and is considered a transgression towards living creations, and it is prohibited.

Thus, as long as the animal can be cared for and treated, the animal must be left to live and not to be killed. However, weighing the maslahah and mafsadah with two mafsadah (الأخذ بأخف الضررين) must be taken into consideration.

In certain cases, letting a critically ill animal lives without killing it would lead to more suffering for the animal compared to euthanasia, and the cost of treatment and care is too high. In this case, the opinion that permits euthanasia on dying or critically ill animals can be used to prevent a bigger harm than performing euthanasia.

In addition, let us follow the example of associations or individuals nowadays that help treat, provide food and drinks and care for abandoned animals through their own means and initiatives. This is a commendable and noble deed in Islam.