IRSYAD AL-FATWA SERIES 242 : CHANGING NAME FOR THE NAME IS TOO HEAVY TO BEAR 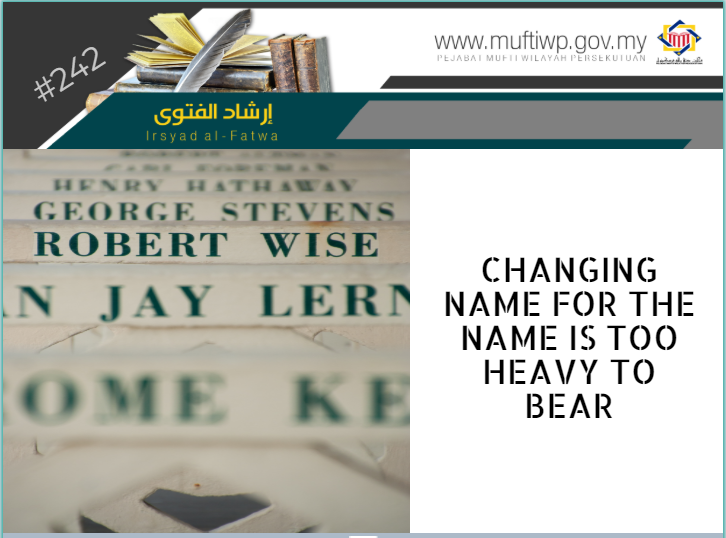 Salam SS Mufti. My youngest sibling was always sick during early childhood. My grandmother changed the name for according to her, it is too heavy for my sibling. After changing names, my sibling did not fell ill as often as before changing names.

My question is, is this belief true or is it just a coincidence?

The issue of naming a child is important in Islam’s view. This is due to the fact that a good name is one of the factors in shaping the character of an individual. The following are prophetic evidences that support this:

“On the Day of Resurrection, you will be called by your names and by your father's names, so give yourselves good names.”

The sanad for this hadith is judged by Imam al-Nawawi as jayyid, and it states that someone should give good names to his children and family members.

The Relationship Between Name and Character

Some Islamic scholars explain that there is a relationship between the name and the individual named. One example includes the statement made by Imam Ibnul Qayyim rahimahullah, he said: As a conclusion, akhlak, characters and deeds that are bad has a relationship with the individual’s name. Good names lead to good akhlak, character and behaviour. And the Prophet PBUH is not named Muhammad except for his many commendable and noble character. And the possessor of good names would be ashamed of his name and this would compel him to do things that reflect his good name. (See Tuhfah al-Maudud, pg. 250)

One of the prophetic evidences that encourage changing an inferior name to a better name is from Abu Hurairah RA:

“Zainab's original name was "Barrah," but it was said' "By that she is giving herself the prestige of piety." So, the Prophet PBUH changed her name to Zainab.”

There is another hadith that states:

“From al-Musaiyab, that his father (Hazn bin Wahb) went to the Prophet PBUH and the Prophet PBUH asked (him), "What is your name?" He replied, "My name is Hazn." The Prophet PBUH said, "You are Sahl." Hazn said, "I will not change the name with which my father has named me." Ibn Al-Musaiyab added: We have had roughness (in character) ever since.”

According to the two hadith above and other hadith related to naming, Islamic scholars come to a few conclusions:

On this basis, Imam al-Nawawi ruled it makruh (undesirable) to name a child with a bad name and the name that means misfortunes or mishaps. (See al-Majmu 'Syarh al-Muhazzab, 417/8)

A Name is Too Heavy to Bear?

Regarding the issue of a child cannot bear a certain name for it is too heavy, we did not find any basis or explanation for this claim.

“Superstitions are unbeneficial beliefs, it is harmful and does not correspond to the healthy mind and current reality.” (See al-Mazahib al-Fikriah al-Mu'asiroh, 2/1186)

We also fear that this belief contradicts the aqidah that is obligatory for all Muslims to believe, and that is, only Allah SWT alone can benefit or harm anyone or anything.

“And if Allah should touch you with adversity, there is no remover of it except Him; and if He intends for you good, then there is no repeller of His bounty. He causes it to reach whom He wills of His servants. And He is the Forgiving, the Merciful.”

Imam Ibnu Kathir when commenting on this verse said: “Every goodness, misfortune, benefit and harm is from Allah SWT. There is nothing beside Him in those matters. And Allah SWT is the only one deserving of worship. There is no one beside Him.” (Refer Tafsir al-Quran al-‘Azhim, 7/407)

This belief has an element of believing in bad luck or misfortunes that is prohibited in a hadith by Prophet PBUH:

There is no thiyarah / bad luck in Islam

Referring to the above statements, we hold the opinion that believing a certain name is too heavy for a baby to bear is a belief that is not based on clear evidences, thus, it is best for Muslims to avoid believing in such beliefs.