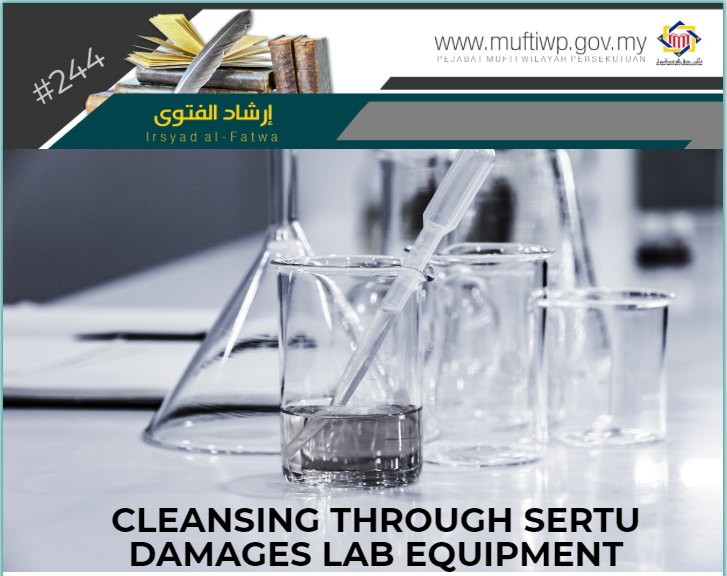 Assalamualaikum Dato’ Seri Dr Zulkifli. I’m a post-graduate student in a university. I would like to ask Dato’ Seri Dr an issue regarding the cleansing of mughallazah najis (heavy najis). Now, I’m in my lab work phase and for my research, I will be using an enzyme from swine. Now, I’m finding it very hard to adjust myself for I’m always thinking of cleanliness (purity status) and cleansing all of my lab equipment through sertu. There are quite a number of equipment and apparatus that I have to use and there are some machines that cannot be cleansed through sertu, for it will damage the machine. Hope to get an explanation from Dato’ Seri Dr regarding the best way for me to work, in order to take care of the cleanliness of myself, my clothes as well as my lab equipment and apparatus that are shared with other students as well, so that we can work together in our lab without any doubts.

“He has only forbidden to you dead animals, blood, the flesh of swine, and that which has been dedicated to other than Allah. But whoever is forced [by necessity], neither desiring [it] nor transgressing [its limit], there is no sin upon him. Indeed, Allah is Forgiving and Merciful.”

Imam Fakhruddin al-Razi explains the prohibition of swine: “Allah states the flesh of swine which means all parts of the swine, but specifically its flesh for the purpose of the prohibition is preventing it from being eaten”. Refer Mafatih al-Ghaib (5/192)

Imam al-Baidhawi said in his commentaries (1/119): “The phrase ‘and the flesh of swine’, indeed that it specifies flesh for usually it is eaten. But it actually meant all parts of the animal. Hence, every part of the animal follows the ruling of swine (which is prohibited)”

Swine is Considered as Heavy Najis

As it is known by all, the final opinion in madhhab al-Syafie states that najis mughallazah can only be cleanse through tasbi’ which is the washing with mutlak water for seven times, and tatrib which is one washing of water mixed with soil. See al-Majmu` Syarh al-Muhadzdzab (2/585). Swine are considered as heavy najis using qiyas, comparing it to dogs. This is due to the fact that swine is worse than dogs when compared. Thus, to clean mughallazah najis, we refer to a hadith from Abu Hurairah RA, the Prophet PBUH said:

“The cleansing of the utensil belonging to one of you, after it has been licked by a dog, is to wash it seven times, and using soil for cleaning for the first time.”

This is what is called as sertu.

For the context of you asking and claiming that the lab work and cleaning of it have to be done repeatedly using lab equipment or lab apparatus using swine enzyme would damage the equipment or apparatus and it would be troublesome for the researcher. If the claim is true, there is a rukhsah (facilitation) provided in Islam for someone to follow another opinion that allows it on certain conditions. This is said by al-Habib Syeikh Abdurrahman bin Muhammad Ba’lawi in his book, Bughyah al-Mustarsyidin (pg. 19), where he said: It is permitted for someone following madhhab al-Syafie to taqlid to another madhhab, or other opinions that is the opposite of the opinion in madhhab al-Syafie in desperate situations. However, it is prohibited to taqlid to another madhhab if he is not in desperate situation, unless he is an expert and competent to conclude opinions and he find evidence that he deemed stronger than the evidence of the imam of his madhhab.

If what is claimed is true, that using water or soil would damage the lab equipment that you will be using, then it is tsabit that damage to property will happen while Islamic law is not intended to damage property but to protect it. This is known as Hifz al-Mal. From Mughirah bin Syu’bah, the Prophet PBUH said:

“Indeed, Allah has prohibited you to throw away your property”

Islamic law also is not intended to burden someone with a ruling that would trouble or hurt him. Allah SWT state in the Quran:

“Allah does not intend to make difficulty for you,”

Doing lab research and science experiment for education is a necessity in this time and era, for through research a lot of new findings and innovation are discovered and this would benefit mankind as a whole. Thus, damaging lab equipment or apparatus by cleansing them with water or soil would hinder the research needed for the development of the ummah. This is an excellent example of Islamic legal maxim used by Syeikh Abu Zaid and agreed by Syeikh al-Qaffal in the case of wearing shoes that are sewn with swine’s fur:

From the statements above, we are inclined towards the opinion that provides a rukhsah or lightening of ruling according to Islamic law. However, there are conditions included below in consideration of the maslahah, so as to not be included as an act of trifling with religious affairs and talfiq which is taking easy when it comes to Islamic rulings. We state the legal rulings as follows:

Other than that, if you take the rukhsah of using taqlid to another madhhab, it must be done with caution following the rules and only for certain cases. It cannot be used carelessly or arbitrarily as it can lead to fitnah in our society that follows madhhab Syafie. This is to maintain the harmony of Muslim community and to teach discipline in practising Islamic law. This is in line with the Islamic legal maxim that states:

Hopefully this explanation will benefit the questioner.