IRSYAD FATWA SERIES 247: THE RULING OF WATCHING SPORTS NOT COVERING THE AURAH 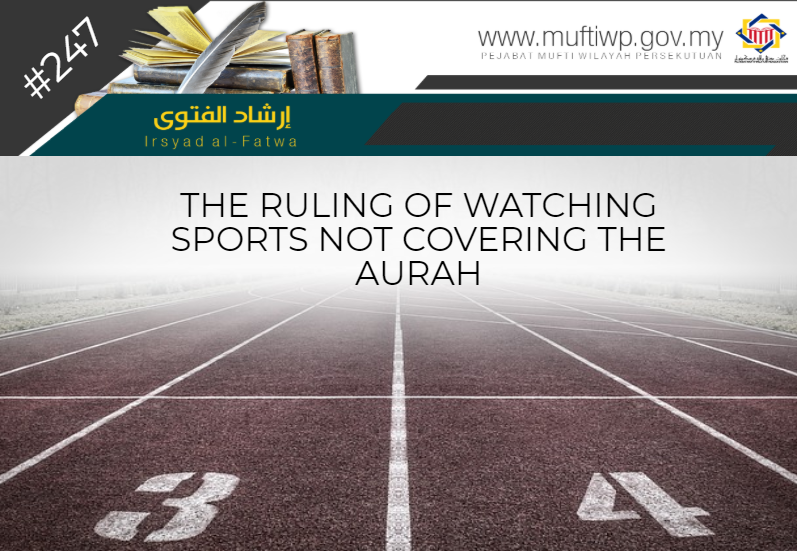 “Indeed, the hearing, the sight and the heart - about all those [one] will be questioned.”

Whatever we hear, see and think will be asked, and we will be held responsible for it by Allah SWT in the hereafter, from the smallest to the biggest of deed. Allah SWT also commands Muslims to guard and take care of their sight and do not expose their aurah:

From a hadith, the Prophet PBUH said to Saidina Ali RA:

“Do not give a second look, Ali, (because) while you are not to blame for the first, you have no right to the second.”

According to Imam al-Nawawi, the ruling for looking at the aurah of another ajnabi, may it be for man or woman, is prohibited according to the majority of Islamic scholars. (See Syarh Sahih Muslim, 4/30)

From Jarir ibn Abdillah RA, he asked the prophet PBUH about looking at a woman unintentionally, the Prophet PBUH said:

“Turn your eyes away,”

The Permissibility of Watching Sports Tournament

The original ruling for watching any sports tournament is permissible. The permissibility is tsabit through a narration by Saidatina Aisyah R.Anha:

A few Ethiopian came to the mosque (Nabawi) on Eid to perform swordplay, and the Prophet PBUH asked me to watch it. I put my head on the Prophet PBUH’s shoulders and watch it until I’m tired and look away,”

There’s a hadith about a companion of the Prophet PBUH named Hanzalah, where he fears that he had become a hypocrite (munafiq), for he forgets to remember Allah when he is with his family after remembering Allah in a ceremony with the Prophet PBUH. The Prophet PBUH said:

Imam al-Nawawi when commenting on this hadith states another hadith of different wording in Sahih Muslim, he explains that it is not sanctioned for us to always perform worship. That is why when Hanzalah feels worried that he has become a hypocrite for forgetting to remember Allah, the Prophet PBUH explains that there is a time for worship and there is a time for worldly matters and having fun with family members. (See Syarh Sahih Muslim, 17/66)

There is also an athar from Ibn Shihab that states:

So far, we had set three early premises for this issue:

Then a question arises, what is the ruling for watching sports that does not cover the aurah such as soccer, badminton and hockey where the players do not completely cover their aurah, but unlike sports that clearly does not cover their aurah such as gymnastics and swimming? Is there any flexibility or relaxation on it, if the purpose is for light entertainment and not for sexual desires?

We state the fatwa and opinions of Islamic scholars regarding this issue:

Fatwa and Islamic Scholars’ Opinions Regarding Watching Soccer and Other Sports

Watching sports can be prohibited if it involves what is prohibited such as the athletes wear impolite clothing, wasting too much time and neglecting the commandments in Islam. (See https://archive.islamonline.net/?p=1414 )

However, in the issue of players exposing their knees or thighs, he said that aurah is divided into two; mughallazah (heavy) aurah, that is obligatory to be covered and mukhaffafah (light) aurah that is not obligatory to be covered. (Refer to his explanation through the link https://www.youtube.com/watch?v=1YbcJTFoCDU  and https://www.youtube.com/watch?v=pkyuAM6OAJw ).

From the fatwa stated, we find that the scholars’ opinions are generally divided into three; a blanket prohibition, prohibition when there is an element of sin and permissibility with a little relaxation or flexibility.

According to the fatwa from Islamic scholars, we are of the opinion that it is permitted to watch sports that does not cover the aurah, on the condition that the players wear acceptable and respectful clothing. This includes sports such as soccer, hockey, badminton, ping-pong, silat, sepak takraw and netball.

However, sports such as gymnastics, diving and swimming is prohibited because the attire is inappropriate, disrespectful and does not cover the aurah or anything much at all.

The reasons for our conclusion are as follows:

A ruling is based on the generality and custom.

In general, and customarily, sporting events are watched for entertainment purposes from the point of gameplay, strategy, and the spirit of supporting statehood or support to the club. It's awkward and bizarre if anyone watches sports events such as soccer, hockey and badminton with the aim of looking at the players' aurah and to fulfil one’s lust.

There is a hadith where the Prophet PBUH chooses a lighter option among two things, as long as it is not sinful:

“Whenever the Prophet PBUH was given a choice between two matters, he would (always) choose the easier as long as it was not sinful to do so; but if it was sinful he was most strict in avoiding it”.

Watching sports is one of the most popular medium for society to entertain themselves following the Islamic law. Totally prohibiting it would be troublesome for them for most sports does not cover the aurah.

In this case, choosing the opinion that permits watching sports that does not cover the aurah as long as the attire is acceptable and respectful is the manifestation of facilitating human’s affairs that is encouraged in Islam.

“Certain things when it is too narrow then widen it.”

Total prohibition of watching sports that does not cover the aurah would give a huge effect to the players, coaches, managers and everyone involved in the broadcasting of the sporting events. This is due to the fact that they rely on the sports industry for their livelihood. If there are no viewers then their income would be affected.

In this situation, a wider fiqh ruling is used to prevent a huge effect towards an industry where a huge number of Muslims are involved in it.

“Certain desires or wishes are celebrated to a necessary extent”

In this situation, viewers and players can taqlid to mazhab that states that thighs are not even considered as aurah. This is the opinion of Imam Malik and Jarir at-Thabari, or the mazhab that states knees and thighs are mukaffafah aurah and it is not obligatory to cover them, as stated by Imam Bukhari and Imam Ibnul Qayyim.

However, players are encouraged to try to the best of their ability to cover their aurah completely in accordance to the opinion of the majority of scholars that states that knees and thighs are aurah and it is obligatory to cover them.

One thing that we need to analyse is that Islam is a religion for everyone, regardless of race, national boundaries, backgrounds and levels of thought. Islam comes to ease and removes the hardships of people, not to burden them. The Prophet PBUH said:

"Religion is very easy and whoever overburdens himself in his religion will not be able to continue in that way. So, you should not be extremists, but try to be near to perfection and receive the good tidings…."

“And make things easy (for them), teach (them), give good tidings to the (people), and do not repel (them) from Islam,”

It is the responsibility of each of us to carry out an inclusive dakwah that embraces all levels of society. In the era of globalization that we face now, any external elements must be handled wisely and prudently. Attempting to prohibit everything without giving a flexible solution will keep the society away from Islam.

The late Muhammad Ali (world boxing legend) and Mohamad Salah (Egyptian footballer / Liverpool star) are among the big names that have become icons in the sports world that brought the name of Islam in the West. They now know that Muslims are also able to compete at the highest level in any area they are involved in.

In conclusion, though we permit watching sports that do not cover the aurah (but still acceptable and respectful), such as football and badminton, but moderation is obligatory. All the lawful things will be prohibited when there are excessive elements, even in worship. In addition, the Prophet PBUH also instructed us to leave things that were of no benefit to us:

"Indeed, among the excellence of a person's Islam is that he leaves what does not concern him."

Some examples of things that are of no benefit to us are, watching sports events excessively that results in negligence of job demands, obligations to learn or increasing worships and to do welfare works to help the communities.

On this occasion, we would like to take the opportunity to call on our Muslim athletes to try their best to cover the aurah perfectly. The obligation of covering aurah remains applicable to every Muslim in whatever situation and wherever they may be.