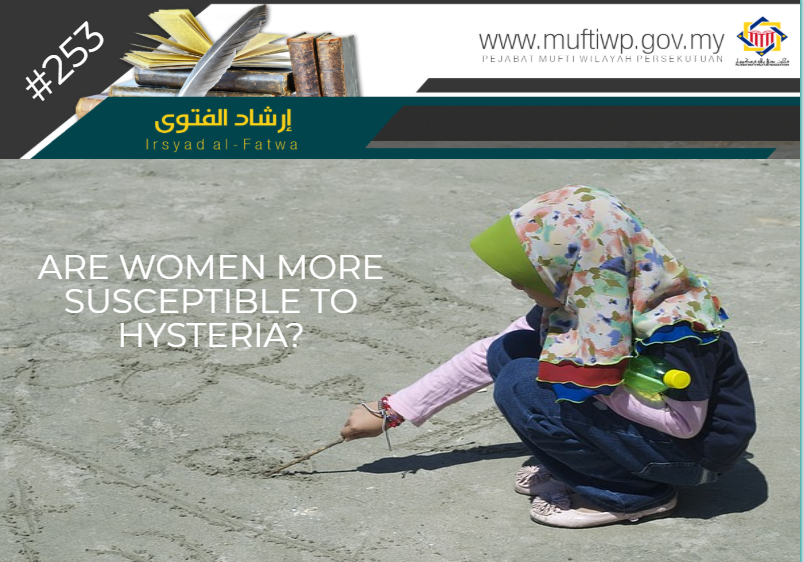 Assalamualaikum. I want to get a clarification from SS Mufti, is it true that women are more susceptible to hysteria? If it is true, how can we handle this problem?

It’s undeniable that one of the most common spiritual illnesses occurred to women is hysteria. There’s a theory stating that hysteria is caused by the mental instability of an individual who experienced emotional stress or psychological conflict. However, one of the most popular causes of this, especially among women is the influence of shaytan.

According to Ibn al-Qayyim in his book at-Tibb al-Nabawi, illnesses such as hysteria is named al-sar’ (possession), which happens as a result of an attack from evil spirits to human’s souls that can have a negative impact on the physical state of the victim. The possession of evil spirits is in the form of jinn or shaytan, that enters human’s bloodstream and misleading the victim through actions that are beyond the control of the victim’s mind and soul. (See Al-Tibb al-Nabawi, pg. 51)

The possession of human’s body by evil spirits is also explained by Syeikh Wahid Abdussalam Bali that states al-sar’ (الصرع) is a symptom of lack of function that overrides the human mind so that it cannot realize what he says and unable to connect between what he had said and what he will say. People who are affected by this illness suffers memory loss due to the impairment of the brain's nerves. (See ‘Alam al-Jin fi Dhaw’ al-Kitab wa al-Sunnah, pg. 252)

Hence, hysteria from the Islamic view is also seen as a symptom of human possession by evil spirits that enter the human body to disturb the soundness of the mind and the soul. This is consistent with the words of the Messenger of Allah PBUH when he is describing the matter of the jinn and the shaytan trying to enter the human body and damages the hearts of the people through a hadith:

“The devil flows in a man like his blood.”

According to Islamic scholars, spiritual disturbances to women is not something new, and they happened during the time of the Prophet PBUH. Narrated 'Ata bin Abi Rabah:

Ibn `Abbas said to me, "Shall I show you a woman of the people of Paradise?" I said, "Yes." He said, "This black lady came to the Prophet PBUH and said, 'I get attacks of epilepsy and my body becomes uncovered; please invoke Allah for me.' The Prophet PBUH said (to her), 'If you wish, be patient and you will have (enter) Paradise; and if you wish, I will invoke Allah to cure you.' She said, 'I will remain patient,' and added, 'but I become uncovered, so please invoke Allah for me that I may not become uncovered.' So, he invoked Allah for her."

Based on observations, amongst the reasons why women are more susceptible to spiritual disorders can be expressed as follows:

Hence, in order for us to protect ourselves from any spiritual disturbance especially that which comes from the jinn and the shaytan, the best way is to return to what has been taught to us in our religion. Here are several examples:

He said, "My Lord, then reprieve me until the Day they are resurrected.". [Allah] said, "So indeed, you are of those reprieved. Until the Day of the time well-known.". [Iblees] said, "My Lord, because You have put me in error, I will surely make [disobedience] attractive to them on earth, and I will mislead them all. Except, among them, Your chosen servants."

For example, the real way to fence our house is by reciting basmalah every time entering the house and closing the door of our house. Furthermore, the people living in the house must always worship Allah SWT according to the Quran and Al-Sunnah such as performing congregational prayer, reciting the Quran especially Surah al-Baqarah and treating each other kindly. At the same time do not do anything sinful in the house. This will scare away the shaytan from entering the house or disturbing its occupants.

“The Satan is present with any one of you in everything he does;”

Isti’azah is reciting “أَعُوذُ بِاللهِ مِنَ الشَّيْطَانِ الرَّجِيمِ” which means “I seek refuge from the cursed shaytan”. When we feel like we are being seduced, whispered to or disturbed by shaytan, quickly recite isti’azah. Allah SWT states in Surah al-A’raf, verses 200-201:

“And if an evil suggestion comes to you from Satan, then seek refuge in Allah. Indeed, He is Hearing and Knowing. Indeed, those who fear Allah - when an impulse touch them from Satan, they remember [Him] and at once they have insight.”

Third: Certain verses or surah from the Quran

Those are the three types of zikr to fight off shaytan. Recite them with confidence and belief, not with doubt and indifference. Furthermore, these three zikrs can be used for any type of shaytan’s disturbance anywhere. There are other zikrs that the Prophet PBUH has taught us specifically for entering the bathroom, empty house and others.

Know that these types of disturbances fall under the category of tests for believers. Just as what was said by Abu al-Barra’ al-Ma’ani, “Jinn’s possession on humans is considered a test from Allah SWT, Allah SWT with His wisdom tests His slaves with many tests and one of them is possession. Allah SWT states: Every soul will taste death. And We test you with evil and with good as trial; and to Us you will be returned. (Surah al-Anbiya’ verse 35), hence, to those that is tested, be patient and hope for Allah’s rewards, at the same time try to treat with what has been sanctioned….” (See Fath al-Haqq al-Mubin, pg. 79)

Thus, as a being created by Allah SWT, there’s no other way for a woman except going back to the manhaj that has been set by Allah SWT and his messenger the Prophet Muhammad PBUH. Obeying all of Allah’s commandments and avoiding all that Allah SWT has prohibited to reach the level of a righteous (solehah) woman, as stated by the Prophet PBUH:

We pray to Allah so that we will always be protected from the disturbances of jinn, shaytan and His creations. We conclude this discussion with a famous prayer: