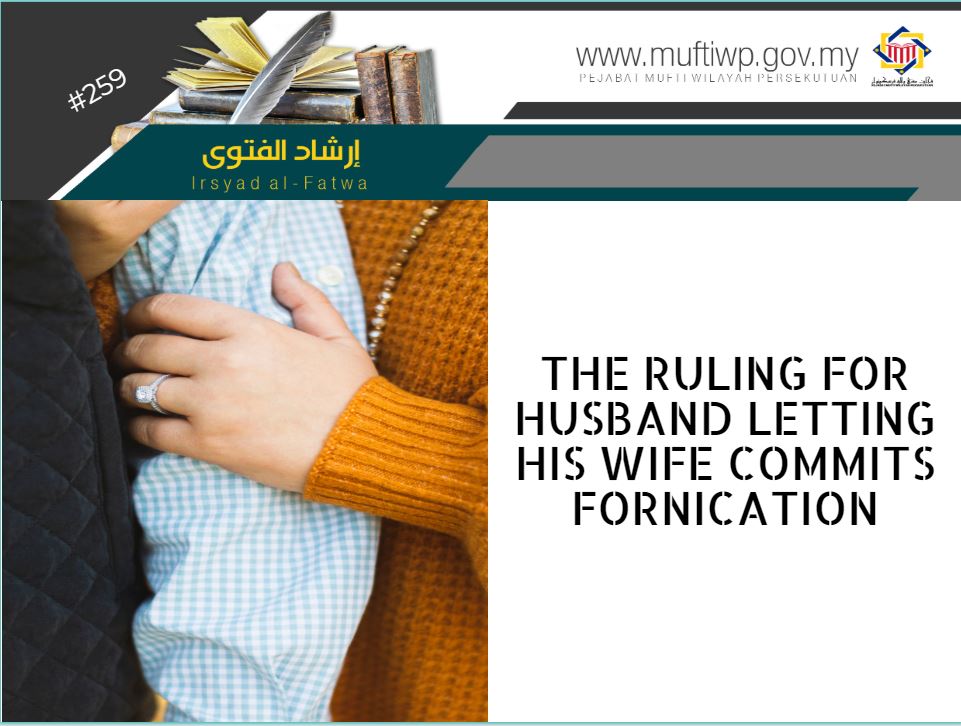 What is the ruling for a husband that lets his wife to commit fornication and still think positively of her?

As for وَالزَّانِيَةُ لَا يَنكِحُهَا إِلَّا زَانٍ , “and none marries her except a fornicator or a polytheist” means disobedient man for committing fornication, أَوْ مُشْرِكٌ or a polytheist who does not consider fornication as prohibited. See Tafsir al-Quran al-‘Azim (10/165-166)

Al-Maraghi said: The saying of “Birds of a feather flock together,” is accurate. Undoubtedly, it is of a general statement and does not apply to every circumstance. The same goes for the saying “Good deeds are only done by the people of taqwa,” for in reality, occasionally people with no taqwa would also do good deeds. As with the case of a man who commits fornication sometimes marries a mu’min pure woman and a woman who commits fornication sometimes marries a mu’min pure man. See Tafsir al-Maraghi (9/4712)

The Ruling for Husband Letting His Wife Commit Fornication

Answering the question, it is a great sin. There are several hadiths from the Prophet PBUH that explain it. Thus, Imam al-Zahabi said that it is one of the great sins that we are commanded to avoid in his book, al-Kaba’ir (The Great Sins). See al-Kaba’ir (pg. 130)

In a hadith from Ammar bin Yasir RA, the Prophet PBUH said:

While according sunnah, dayus is someone that lets offence or misdeeds done unto his family members under his authority which may be his wife, daughters or female relatives. May it be fornication or anything leading to fornication such as exposing aurah in front of other non-ajnabi man and being in suspicious proximity with them. See al-Fatawa al-Lajnah al-Daimah (17/197)

Imam al-Zahabi said: By that, any husbands that has strong suspicions that his wife is committing fornication but lets it be because he loves her, or he has a huge debt or mahar to his wife that he is unable to pay back, or he has small children that his wife demands custody of, then his sin is not as heavy as the one that is sleeping with his wife, and there’s no benefit to the one that does not have jealousy at all. See al-Kaba’ir (pg. 130)

From Quranic and hadith evidences above, it is clear that husband letting his wife commits fornication is prohibited and it is a great sin. He is called as dayus which means he lets anyone sleeps or meet with his wife or daughter, or lets his wife or daughter being touched, hold or hugged by other men.

Due to this, Islam demands a person to have jealousy. Ibn Qayyim said: “In religion, there is a need for the feeling of love and care or jealousy (towards family members). Whoever that does not has this feeling in himself then there is no religion in him. For this feeling of jealousy protects the heart and body part keeping away misdeeds and vile acts. Without it his heart will die, and so will his sensitivity (towards what is prohibited), until he no longer has any strength to disallow evil or prevent it.” See al-Jawab al-Kafi (pg. 68)

We recommend that any action taken by the husband is with full understanding and concrete evidence and not just from assumptions to prevent any injustices towards the wife.

Close and intimate relationship between husband and wife needs to be nourished and bound back to husband and wife’s relationship with Allah by performing congregational prayer together, qiamullail during the night together, attending Islamic classes as a daily or weekly activity with the children or eating together as a family would surely lead to the environment of “Baiti Jannati” (my home, my paradise).

Furthermore, there should be an introspection, advice or counsel from the husband as the family’s leader to lead the family towards the hereafter and to seek mardhatillah. Lastly, always pray together for a blessed life. Allah SWT states:

May Allah always guide us and gives us strength in leading our family on the road the pleases Him.

To read related article, see Al-Kafi series 13: Is a Husband Considered Dayus Knowing His Wife Committed Fornication but She Has Repented? [1]