IRSYAD AL-FATWA SERIES 261: REPLACING THE WORSHIP OF PRAYER AND FASTING OF THE DECEASED 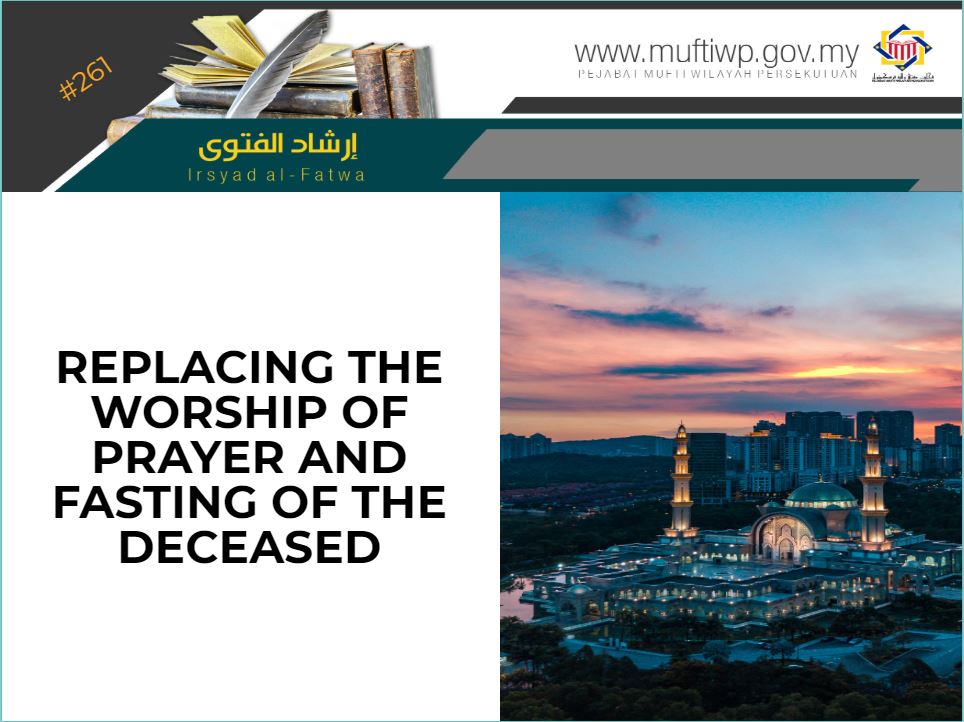 My mom passed away without telling anyone the number of prayers or fasting that she neglected while she was alive. How do I replace (qada’) her worships?

Bismillah. Alhamdulillah, praise and thanks to Allah for the many countless blessings He has blessed us all with. Blessings and salutations to the prophet Muhammad PBUH, his family, companions and all those that follow his teachings to the day of judgement.

Death is a certainty in life. Thus, Islam taught us three main things that we need to take care of when any of our relatives passed away:

By that, according to the above, we will detail the second obligation that is mentioned to answer the question asked.

This problem first needs the understanding of several things:

First, prayer is a type of worship that is sanctioned for each individual and cannot be done by someone else. The same goes to the people that has passed away, the prayer neglected cannot be replaced. This is the opinion of the majority of Islamic scholars. Refer Hasyiah Rad al-Mukhtar (2/79), I’anah al-Thalibin (1/33)

“And that there is not for man except that [good] for which he strives. And that his effort is going to be seen - then he will be recompensed for it with the fullest recompense.”

Second, fast that is neglected by the person that has passed away falls into two categories as stated in Mughni al-Muhtaj (1/438) and Bidayah al-Mujtahid (1/290):

Allah's Messenger PBUH said, "Whoever died, and he ought to have fasted (the missed days of Ramadan) then his guardians must fast on his behalf."

Third, the manner of counting the days that need to be replaced when the person that passed away didn’t tell the number of days he didn’t fast.

“Origin (of something) is free from accountability”

A few conclusions can be drawn from the above statements:

May Allah SWT gives us understanding in fulfilling all of His commandments. Amin.