IRSYAD AL-FATWA SERIES 264: THE RULING OF DISMISSING OF PRAYER IN CASE OF AN EARTHQUAKE 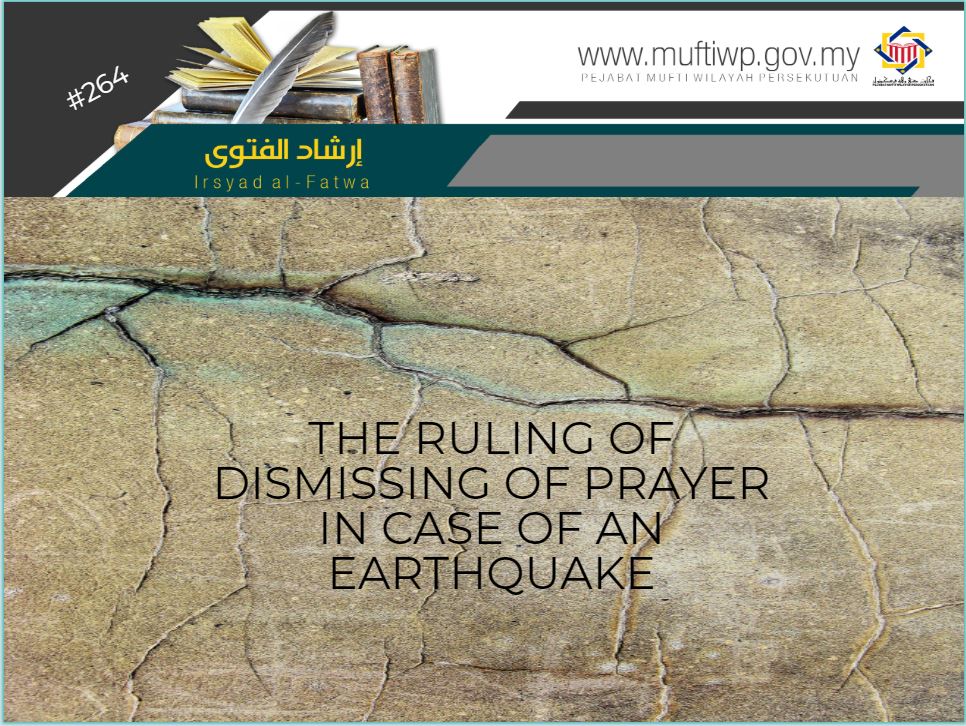 Salam Dr, please explain the ruling of dismissing of prayer in dangerous situations such as during an earthquake. Are there any special rewards for someone that continues with his prayer regardless of the situation?

In the issue of dismissing a prayer that is being performed, Islamic scholars have divided it into two categories; whether it is an obligatory prayer (fardhu) or sunnah prayer. The factor of why the prayer is dismissed is also discussed in this ruling.

Fundamentally, all Islamic scholars hold the opinion of it is prohibited to dismiss obligatory prayer without any reasons (that is allowed by Islamic law). They referred to the verse:

“…and do not invalidate your deeds.”

According to this verse, it is prohibited for someone to dismiss or invalidate their deeds, whether by doing something that can invalidate all of his good deeds which is renouncing Islam (murtad) or doing a type of worship like fasting or praying and purposely invalidating or dismissing the worship without any reasonable reason that is accepted by Islamic law.

However, there are exceptions, which are invalidating a prayer because of an illness or harm. For example, when someone is performing an obligatory prayer, if he sees a snake or a scorpion in front of him, there’s hadith evidence that asked the person to kill it. This hadith is from Abu Hurairah RA, the Prophet PBUH said:

“Kill two black things even in prayer; which are snake and scorpion.”

The same goes in other situations that can cause harm to someone that is performing prayer such as fire, earthquake, a wild animal, extreme stomach ache and other similar situations. This is in accordance with Islamic legal maxim from the Prophet PBUH’s hadith:

“There should neither be harm nor reciprocating in harming.”

In the discussion of muwazanah (pros and cons) between maslahah and mafsadah, Imam al-‘Izz Ibn Abd Al-Salam said regarding the issue of dismissing of prayer: The process is prioritising of saving someone that is drowning from performing of prayer. This is due to the fact that saving the life of a human that is ma’sum (protecting its life and property) is preferable in Allah’s eyes than performing of prayer. And to bring together these two maslahah he can first save the drowning victim then replace (qada’) the prayer that he had left earlier. See Qawaid Al-Ihkam, Izzuddin Ibn Abd Al-Salam (1/95).

“Whoever does sunnah fasting is the trustee for himself. If he wants he can continue his fast or break his fast.”

The hadith shows the facilitation that is given to someone that does sunnah fasting the he can either continue his fast or break his fast. Thus, sunnah prayer is deduced (qiyas) to be the same as this issue and is said that it can be dismissed without any reasons, but it is preferable to continue the prayer rather than dismissing it.

Choosing ‘Azimah to Continue with the Prayer Regardless of an Earthquake

In in this issue, there is a discussion that is known as ‘azimah. It brings to the meaning of holding the original ruling and not taking the rukhsah (facilitation) that has been given according to Islamic law.

In the issue of continuing the prayer when there is an earthquake, it is also considered as ‘azimah as stated by the fuqaha. Even though there is a facilitation and permission to dismiss the prayer, if he chooses to continue with his prayer, his act is permitted.

Dr Abd al-Karim Zaidan Rahimullah said: It may be better or preferable to hold to ‘azimah eventhough with it is the permissibility of taking the rukhsah (permitted facilitation). An example of this is: It is permitted to utter the words of kufur (with faith still intact in the heart) when coerced to do so, and if he refuses, he will be killed, or his bones will be broken. However, it is preferable to hold the choice of ‘azimah (which is refusing to utter the words of kufur). For this act will bring splendour to the religion, causes grief in the enemy’s heart and weakened their soul as well as strengthening the belief in the believer’s heart.

Coming back to the issue of an earthquake, there is a narration similar in meaning with what the companions and salaf did. One example is an incident that happened to ‘Abbad bin Bishr RA where when he was praying an arrow is thrown at him and it penetrates the left bone of his arm. He pulled it out and continue his prayer. Refer Al-Sirah Al-Nabawiyyah, Syeikh Raghib Al-Sarjani (8/35).

The same goes to an incident that happened to a great Islamic figure from the tabi’in, Urwah bin Al-Zubair when one day his foot is penetrated by iron. Medical experts at the time diagnosed that his foot needs to be amputated. Then Urwah told the doctors: “If you really have to do it, then do it (amputate it) while I’m praying.” See Al-Bidayah wal-Nihayah, Ibn Kathir (9/120).

These stories show how engrossed and wholehearted the salafussoleh are when praying. Hence, even when shot with an arrow and amputated, it didn’t affect them in the slightest and couldn’t move them from their prayer.

In conclusion, we specify the ruling on dismissing of prayer in three parts as follows:

First: Dismissing or invalidating prayer without any reason is prohibited.

Second: Dismissing obligatory prayer if there’s illness or danger that is permitted by Islamic law then it is permitted.

Third: Dismissing sunnah prayer without any reason is permitted but it is preferable to continue the prayer.

Then, in answering the question, we state that it is permitted to dismiss or invalidate the prayer in case of an earthquake. This is to prevent any harm to the person and protecting a greater maqasid in Islamic law in terms of protecting life. Hence, when there is an earthquake, the person should dismiss his prayer and replace it back (qada’) when it is safe or continue his prayer implementing the ruling of ‘azimah and will still be given rewards from Allah SWT.

Lastly, may Allah give us the true understanding in practising our religion. Ameen.