IRSYAD AL-FATWA SERIES 268 : THE RULING OF DRINKING CAMEL’S MILK MIXED WITH ITS URINE 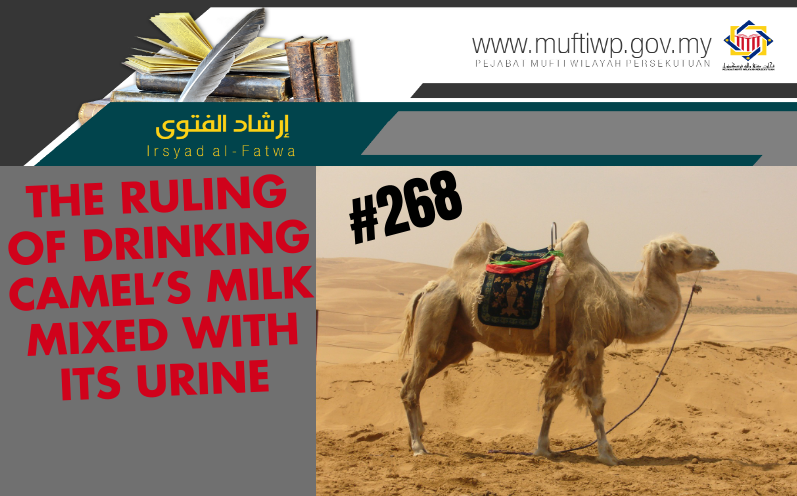 I hope for an explanation regarding the ruling of drinking camel’s milk mixed with its urine.

First, this issue arises from the Prophet PBUH hadith that is narrated by Anas RA, he said:

"Some Bedouin from 'Uraynah came to the Prophet of Allah [SAW] and accepted Islam, but the climate of Al-Madinah did not suit them; their skin turned yellow and their bellies became swollen. The Prophet of Allah sent them to some milk camels of his and told them to drink their milk and urine until they recovered.”

According to this hadith, Islamic scholars give their opinions on the ruling of medicating using camel’s urine.

There are two opinions regarding this matter according to Islamic scholars. The first opinion by Imam Malik, Imam Ahmad and part of the salaf (the first three generations of Muslims) states that camel’s urine is not considered as najis (things that are considered unclean ritually). This opinion is also supported by some scholars of Mazhab Syafie which are Ibn Munzir, Ibn Hibban and others.

The second opinion is that camel’s urine is considered to be najis and this is the opinion of Imam Syafie himself and the majority of Islamic scholars.

First, Islamic scholars agree that medicating with anything that is prohibited such as alcoholic beverages (liquor) is prohibited. This is in accordance to a famous hadith narrated by Ummu Salamah, that states that the Prophet PBUH said:

“Indeed, Allah didn’t provide a remedy for you from what has been prohibited for you,”

In times when there are only alcoholic beverages available and the only way to survive and stay alive is by drinking it then it is permitted to drink it, but only in the amount needed to avoid death. (See Majmu’ah al-Fawaid al-Bahiyyah, 1/60). This is referring to the Islamic legal maxim:

Secondly, the Mazhab al-Syafie permits the usage of najis other than things that are intoxicating for medical purposes. Majority of Islamic scholars holds this opinion. (See al-Majmu’, 9/50)

Imam Nawawi said the ruling on medicating using camel’s urine is permitted according to the Prophet’s PBUH commands to ‘Urainah tribe in the narration stated before. (See al- Majmu’, 9/51)

There are also opinions that said that it is prohibited to medicate using camel’s urine, but the opinions are weak. (See Raudhah al-Thalibin, 3/285)

Camel’s urine is believed to have medical benefits as proven from the story of the Bedouins in the hadith mentioned above.

Other than the hadith, there are other evidences proving the medical benefits of camel’s urine. Camel’s urine is also high in calcium. (See al-sunnah al-Muthaharah, 79, al-Tib al-arabi, 1/278, and al-I’jaz al-Ilmi fi Sunnah Nabawiyah, 833)

Guidelines from the Ministry of Health Malaysia regarding camel’s urine

Ministry of Health Malaysia and World Health Organization (WHO) have ordered pilgrims of hajj and umrah to not drink camel’s milk or urine and not to enter or visit camel’s farm to avoid getting infected with Mers-Cov virus. Until 15 October 2018, Saudi Arabia health authorities recorded an increase of this virus’ infection [1]. Recently, three deaths are reported due to this infection.

According to above statements, we hold the opinion that camel’s urine has medicinal benefits as stated in the hadith previously. The following are some inferences that can be drawn: