IRSYAD AL-FATWA SERIES 277 : THE RULING OF SLAUGHTER BY WOMAN 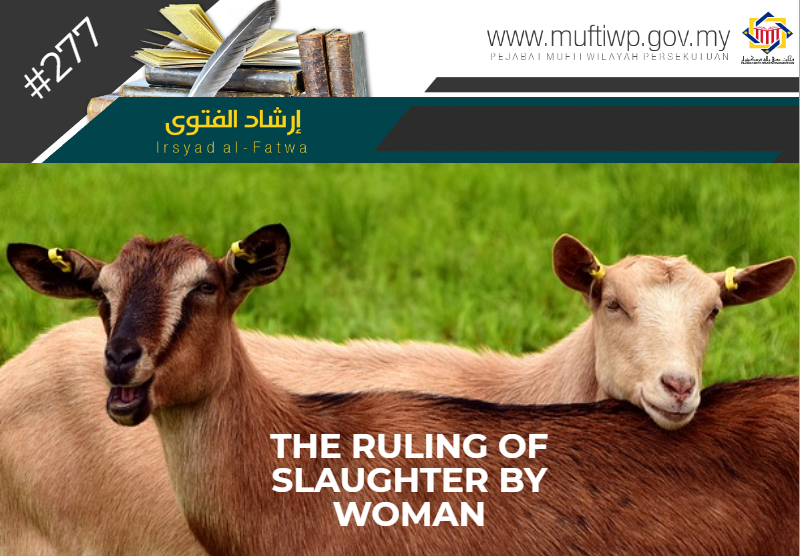 Assalamualaikum ustaz. I heard that slaughtering of animals by woman is invalid. Is it true?

Waalaikumussalam WBT. Alhamdulillah, praise and thanks to Allah for the many countless blessings He has blessed us all with. Blessings and salutations to the Prophet Muhammad PBUH, his family, companions and all those that follow his teachings to the day of judgement.

Slaughter is one of the prerequisite to make it permissible for an animal to be eaten. It’s considered as a good deed in Islam. This is due to the fact that searching for the permissible is compulsory for every Muslim. Just as stated in the Quran:

“Prohibited to you are dead animals, blood, the flesh of swine, and that which has been dedicated to other than Allah, and [those animals] killed by strangling or by a violent blow or by a head-long fall or by the goring of horns, and those from which a wild animal has eaten, except what you [are able to] slaughter [before its death], and those which are sacrificed on stone altars,”

Syeikh Zakariyya al-Ansari said: The essential requirements for slaughter are

Islamic scholars give a few guidelines for the slaughterer to ensure that the slaughter is valid, and the livestock is permissible to be eaten. The guidelines are as follows:

Thus, the most important requisite for someone to slaughter animals is he must be a Muslim. This is in line with Allah’s statement:

“Except for the ones that you slaughter,”

Since this verse is addressed directly to Muslims, it shows that it is permissible to eat anything that is slaughtered by Muslims.

Imam al-Qurtubi said that all that’s said from the verse is that it’s impermissible to eat except for the ones that you slaughter yourself. (Refer al-Jami’ Li Ahkam al-Quran, 6/50)

“A lady slaughtered a sheep with a stone and then the Prophet was asked about it and he permitted it to be eaten,”

Maulana Zakariyya al-Kandahlawi stated that Imam al-Bukhari placed the narration under the heading of slaughtering by woman and female slaves. It’s as if he wants to reject the opinion of slaughter by woman is invalid.

He added that, another lesson that could be taken from the narration is that the slaughter of a woman whether she’s a slave or not, a child or an adult, a Muslim or People of the Book, also in a pure or impure state, the livestock slaughtered should be eaten. Since as stated in the narration the Prophet didn’t ask anything and just permitted it. (Refer al-Abwab Wa al-Tarajim Li Sahih al-Bukhari, 6/58)

Imam al-Nawawi agreed with this opinion and said that the slaughter by a woman is valid and it is permissible to be eaten. He stated:

“Undoubtedly, the slaughter by a woman is permissible. This is in reference to the narration by Ka’ab as stated by the author of (al-Syirazi) in a book. The Slaughter of a man is preferable from the slaughter of a woman which is also written in the book by the author himself. The slaughter of the woman whether the woman is a slave or not, menstruating or had just given birth, a Muslim or People of the Book are all valid and permissible to be eaten. This has been declared by al-Syafie and agreed upon by scholars.”. (Refer al-Majmu’ Syarh al-Muhazzab, 9/86)

To conclude, slaughter that is done by a woman is valid and permissible to be eaten. Yes, some Islamic scholars stated that the slaughter by a man is preferable from a woman’s. This is due to the fact that a man is physically stronger to kill and slaughter an animal.

May Allah give us understanding in His religion.