IRSYAD AL-FATWA SERIES 278 : WHO IS PROPHET ZULKIFLI AS? 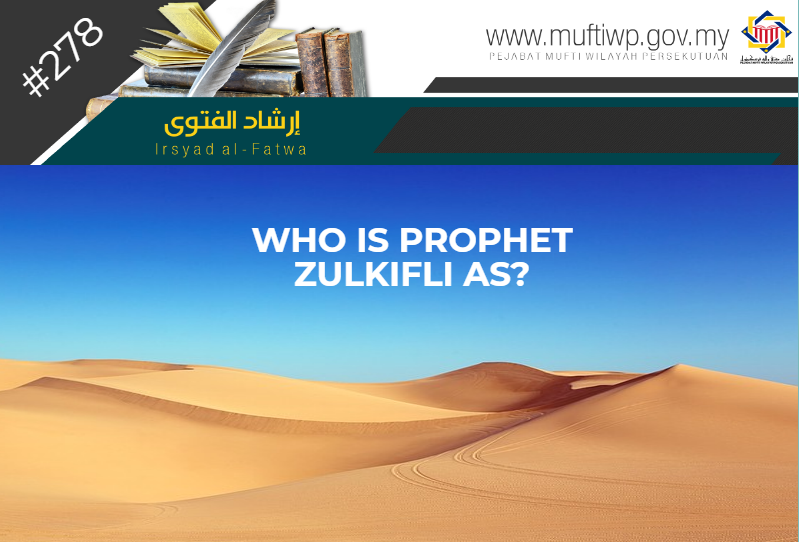 Assalamualaikum SS Dato’ Seri Mufti. Can you tell us the narrative of Prophet Zulkifli AS?

Alhamdulillah, praise and thanks to Allah for the many countless blessings He has blessed us all with. Blessings and salutations to the Prophet Muhammad PBUH, his family, companions and all those that follow his teachings to the day in the hereafter.

Allah states in the Quran:

“And [mention] Ishmael and Idrees and Dhul-Kifl; all were of the people of patience,”

Ibnu Kathir Rahimahullah said: Dzu al-Kifl is mentioned in the Quranic verse along with other Prophets, and so he must be a Prophet himself to be named along with other prophets. (See Tafsir al-Quran al-'Azim, 5/476)

He also added: On the surface, the mention of Dzu al-Kifl in the Quran in the form of being complimented and along with other Prophets clearly shows that he is a Prophet AS. This is the famous opinion among scholars. There is other scholar that is of the opinion that he is not a prophet, but just an obedient servant of Allah and a just and wise judge. Ibnu Jarir tawaqquf (didn’t give an opinion) in this issue. Wallahu’alam. (See Tafsir al-Quran al-'Azim, 5/476. See also Qasas al-Anbiya’, 1/370 and al-Bidayah wa al-Nihayah, 1/259)

Ibnu Juraij dicussed with Mujahid about Allah’s statement: “وَذَا الْكِفْلِ” (and Dzu al-Kifl), he said: He is an obedient servant of Allah, but not a prophet. He is assigned to handle the matters of his people and pass judgement on them justly using his wisdom. It is the same as the narration from Ibn Abi Najih from Mujahid. (See Tafsir al-Quran al-'Azim, 5/477 and al-Bidayah wa al-Nihayah, 1/259)

Syeikh al-Maraghi said: The Prophet Dzu al-Kifl AS – is also known as al-Kiflu which means the lucky one or the responsible – however, Islamic scholars have differing opinions when presenting his life’s narrative. According to the majority of the scholars, he is a Prophet. He is instructed by Allah to call on his people to believe in the oneness of Allah, then he lived in Syria all his life.

Abu Musa al-Asy’ari and Mujahid believes, he is not a prophet but just an obedient servant of Allah that is appointed as a caliph by the Prophet Ilyasa’ AS on condition that he must fast during the day, stay up during the night and always be able to stay patient and control his anger. He managed to fulfil all the conditions. (See Tafsir al-Maraghi, 9/4484)

Syed Qutb said: Dzu al-Kifl is not well-known. We cannot accurately gauge the time and place while he lived. The most famous opinion is he is a Prophet from the Israelis.

Other scholars said that he is one of the notable figures of the obedient servants of Allah from the Israelis. He is willing to fulfil the conditions set by a prophet that asked him to take the prophet’s place after the prophet passes away. The conditions are worship Allah at night, fast during the day and never get angry when passing judgement as a judge for the people. He is willing to fulfil all the conditions and had fulfilled them. That is why he is called Dzu al-Kifl which also means the person that is willing.

However, all these stories have no backing from Quranic evidences. The Quran however, recorded a few of Dzu al-Kifl’s characteristics:

“And We admitted them into Our mercy. Indeed, they were of the righteous.”

In order to record the patience that he has, the Quran mentions about other prophets in this verse. (See Fi Zilal al-Quran, 11/86)

In another verse, Allah SWT states:

“And remember Ishmael, Elisha and Dhul-Kifl, and all are among the outstanding.”

“Dzu al-Kifli is not a prophet, but he is an obedient servant of Allah that prays a hundred times a day. This is why he is named Dzu al-Kifl,”.

Ibnu Kathir Rahimahullah explained in depth about Dzu al-Kifl in his book Qasas al-Anbiya’ (1/370-380). We summarize as follows: “On the surface, al-Quran showed how Allah praises Dzu al-Kifl the same way as other prophets. Thus, shows that he is indeed a prophet. May Allah give blessings and salutations to him. This is the famous opinion,”

Ibnu Jarir and Ibnu Hatim narrated from Daud bin Abi Hind, from Mujahid, he said: “After al-Yasa’ reached an elderly age, he thought: “Is there anyone that could replace me, that could govern and work for the people and is willing to work in my last moments of life so that I could watch over him?” And so, he gathered his people and said, “Whoever is willing to fulfil my three wishes, I will let him be my replacement; which are willing to fast during the day, pray at night and control his anger?”.

Then, Mujahid continued, “A man that the people usually sneer at stood up and say “Me,”. Al-Yasa’ asked, “Are you willing to fast during the day, pray at night and control you anger?” He answered, “Yes,”.

Then al-Yasa’ repeated the statement and question on that day and on other days but everyone just remained silent. The same guy stood up and answered “Me,”. Thus, al-Yasa’ appointed him as al-Yasa’s replacement.

Mujahid continued, “Iblis said to shaytan “Go and deceive him,” But all the shaytan holds their hands up in the air in surrender. Iblis then said “I’ll take of him myself,” He then disguised himself as a very old and poor man. At the time, Dzu al-Kifl is trying to get some rest because he hasn’t slept at all night and day.”

Iblis knocked on the door. Dzu al-Kifli asked, “Who is it?”. Iblis answered, “A mistreated old man,”. Dzu al-Kifli then open the door and invite the Iblis in. The Iblis then tell a long story of how he is mistreated by his people until Dzu al-Kifli’s time to rest is up. Dzu al-Kifli said, “Come to me at night then I’ll help you,”.

When night came. He waited and searched for the old man, but the old man didn’t come. And so, he left.

The next day, Dzu al-Kifli is busy governing his people and working as a judge but he still waited for the old man. However, the old man didn’t come to see him. When he went back to his house to rest he heard a knock on his door, he asked, “Who is it?”. Then Iblis answered, “A mistreated old man,”.

He opened the door and said, “Didn’t I asked you to come when I’m working?” Iblis answered, “But they are evil people. As soon as you came to work they said they would no longer mistreat me but when you went back home they mistreated me again,”. Dzu al-Kifli said, “Go back and come again to me when it’s night time,”.

That is how his sleeping time in the day is spent and he could no longer sleep. At night, he waited for the old man again, but the old man didn’t show up. After waiting and not sleeping for days, he is so sleepy and listless. He said to his family members, “Forbid anyone from coming through my door, I’m so sleepy,” and he went to rest and sleep.

At that exact moment the old man come to his house and asked to see him by saying, “I’ve met him before and told him my problem,”. His family members refused to let the old man in, “By God, he has forbidden us from letting anyone to see him,”.

After failing to persuade Dzu al-Kifli’s family members, Iblis tried looking for another way in and found an air hole. Iblis enters Dzu al-Kifli’s house and knocked from inside the house. Dzu al-Kifli said, “Didn’t I forbid anyone from entering my house?” Iblis answered, “Indeed I was refused to be let in but look at the place that I came in,”

Then Dzu al-Kifli stood up and examined the door to find that the door is still closed like he had closed it before. He is baffled as to how the old man got into his house but after thinking it over he could guess who the old man really is. “Are you Allah’s enemy?” he asked.

“Yes, and you have made me unable to deceive you as I am unable to get you to get angry, I have tried my best, but you would not get angry,” Iblis answered.

Due to this, Allah named him Dzu al-Kifli (the one with the capability), because he has the capability of fulfilling his responsibility. (See Qasas al-Anbiya’, 1/370-380)

Dzu al-Kifli is said to have lived in between 1500-1425 BC and passed away at the old age of 75 years old in Damascus, Syria. There are a few theories as to where he is buried. Some of the theories are:

May Allah bless us with the patience of Prophet Dzu al-Kifli and the unwavering faith of all the prophets and apostles. Amin.