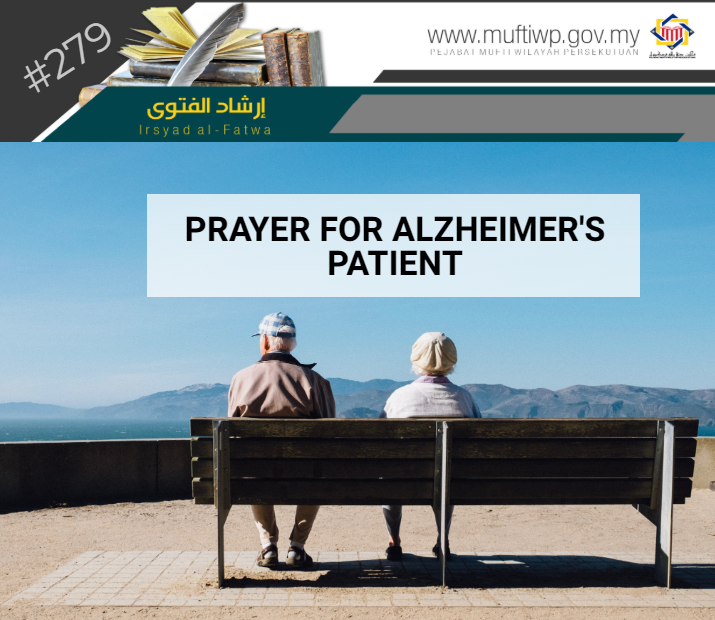 Assalamualaikum SS Dato’ Seri Mufti. I have a question regarding my elderly father that has Alzheimer’s disease (he has short term memory loss). He’s physically well, Alhamdulillah but due to his disease he can’t remember anything that’s happen recently especially the things that’s happened ten to twenty minutes earlier.

My question is, because of this my father doesn’t perform his daily prayers anymore. How does Islam view this situation? Can we as family member pray in his place for him (qadha’)? Thank you

Alzheimer’s is a type of dementia with the characteristics of slowing of speech, declining of thinking, and memory, weakening of judgement and reasoning and it also changes a person’s attitude and personality. The patients are not the only ones that are suffering because of this disease, but it also affects their family members lives since the patients would need constant care. Alzheimer’s also deteriorates the functions of intellect and sociability of the patients. Usually, family members of the patient would consult a doctor when they couldn’t handle the problems arising from the disease anymore. To date, there’s no clear cause of Alzheimer’s disease that can be found. However, the disease is not due to aging. Scientists, believe that it’s a result of the changes in the nerve cells of the brain that causes plaques or tangles to form.

The risk of having Alzheimer’s, the disease that’s synonymous with aging, increases with the increase of age. According to an expert in Psychogeriatric, Department of Medical Psychology, Faculty of Medicine Universiti Malaya, Dr Esther Ebeeneser: Starting at the age sixty-five years old, a person would have a five percent chance of having this disease and it would double every five years. She states that even though the disease is usually linked with age, history has proven otherwise with the first recorded Alzheimer’s patient, a female patient in her fifties.

According to a health information edited by Dr Tania, there are three stages of this disease; first stage of this disease or the beginning of Alzheimer’s, the middle stage where the patient would start to need help from the carer for certain things. For these two stages, we think praying is still compulsory with the help of family or friends to ease the patients to perform their prayers. However, for the third and final stage is where the patients will have:

To get a better understanding regarding the issue, it’s advisable to refer to people who are experts within the field. Insya Allah, we ourselves would refer to the experts to give an accurate answer to the question. Dr Yusuf al-Qardhawi once said, the necessity of referring to the expert of the field when giving a ruling on a point of Islamic law regarding a certain issue to get a clear and concise information. It’s in line with the Islamic legal maxim:

This disease we would categorize as most similar to ma’tuh or senile. From Ali bin Abi Talib RA, the prophet PBUH said:

“The pen is lifted for three group of people: a person that’s asleep until he wakes up, a baby until he hits puberty and a person with mental disability until he regains his mental capacity,”

Syeikh al-Mubarakfuri, understands the term al-ma’tuh as insane or anything similar or comparable to it. (Refer Tuhfah al-Ahwazi,4/570). Ibn Abidin in his writing explains that the ruling for al-ma’tuh is like a child that can think and know good or bad conduct (mumayyiz) but free from responsibility. (Refer Hasyiah Ibn Abidin, 2/426)

In a narration by al-Bukhari, Amru bin Maimun said: Sa`d used to teach his sons the following words as a teacher teaches his students the skill of writing and used to say that Allah's Messenger (ﷺ) used to seek Refuge with Allah from them (i.e. the evils) at the end of every prayer. The words are:

Drawing an inference from the phrase “ I seek refuge with You from being brought back to a bad stage of old life”, Syeikh al -Mubarakfuri states from al-‘Aini, a commentator of Sahih Bukhari said: It’s in the state of al-kharaf where it’s in the early time of childhood, weak physically and weak mentally (couldn’t understand well). It is also said “أرذل العمر” is in the weakest state which is when one is too old and feeble that it’s hard to perform the obligatory commandments in Islam. It’s also hard to even do things for himself like cleaning (showering and going to the toilet) that he becomes a burden to his family that he wished to be dead. (Refer Tuhfah al-Ahwazi bi Syarh Jami’ al-Tarmizi, 10/14)

Ibn Manzur: al-Kharaf is the betrayal of the mind since its weakened or lost because of aging or disease. (Refer Lisan al-‘Arab, 3/338)

After studying various Islamic scholars views including a ruling from Islamweb (no. 44056 and 37606), we find that people who is kharaf and junun are under the same ruling. People in kharaf state (who has Alzheimer’s), are not obligated when his memory is unstable.

If it’s worsen to the state of memory loss, then there’s no doubt that the obligation of praying is lifted from him. Nonetheless, giving advice and encouraging prayer and helping to pray is a responsibility of family members and would of course be rewarded by Allah.

“Allah doesn’t burden any soul other than what’s within its capacity. It will have what good it has gained,”

Syeikh al-Maraghi said: Allah SWT doesn’t burden His slaves with something that they couldn’t handle. Moreover, His generosity is so great that He give ease to them. (Refer Tafsir al-Maraghi, 2/672)

The issue regarding qadha’ or praying in place of a father that’s still alive or has already passed away, just like our previous answers, it cannot be done. It’s because prayer is a type of worship that’s compulsory on a person with no citation from the Quran or Hadith that say that it can be replaced by someone else like fasting. However, if family members feel compelled to do something on his behalf since he can no longer pray, it is better to donate to charity in his name and give the best care to him. May your family have the strength to give the utmost care in caring for your ailing father.

In cases where someone have diseases such as Alzheimer’s, Islam has several concessions according to the person’s ability. Here we listed several suggestions:

“And ask your family to pray and be steadfast therein”

“When a slave falls ill or travels, then he will get reward similar to that he gets for good deeds practiced at home when in good health."

“Whomever lives a long life, filled with good deeds,”

“And to your parents, do good to them,”

As a conclusion, if the Alzheimer’s is in the first two stages, and the patient is still able to remember and perform prayer with help, it’s compulsory for the patient perform the prayer. However, if he’s in the final or end stage that his memory loss is severe to the point that he can’t remember anything, he is considered ma’zur (too weak and no longer obligatory). May Allah forgive all Alzheimer’s patients who are in this stage where they are so weak that they are unable to perform prayer because of severe memory loss.

Lastly, may Allah give us strength and help in doing good and taking care of our parents until it’s finally their time to appear before Allah. We end this discussion by asking everyone to pray for forgiveness and blessings from Allah to our parents.

"My Lord, have mercy upon them as they brought me up when I was small."