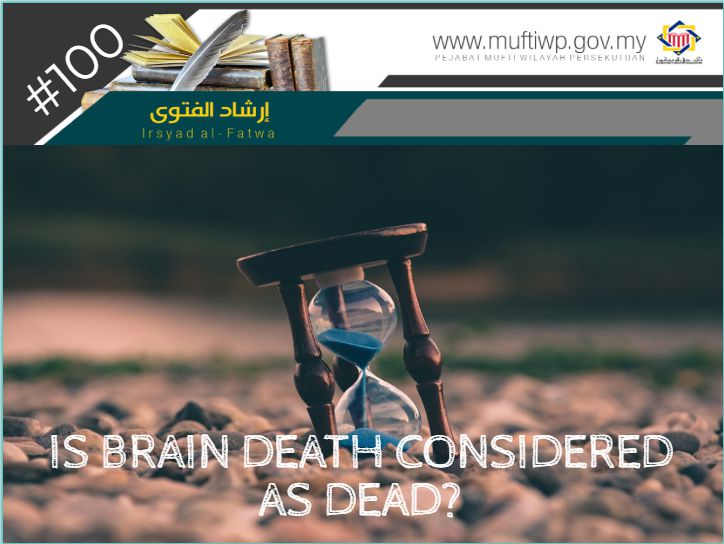 Is brain death considered as being dead?

In the medical world, there are cases of brain death reported for some patients. When brain death occurs, various other issues arise. Among the issues of brain death is the determination of the death status of the patient, considering that the brain is an integral organ for human function.

Brain death is a term used to define a clinical condition of the permanent cessation of complete brain function including the brain stem (loses all brain function including the control of involuntary actions). A person diagnosed with this condition would be certified dead after a confirmation by two specialist doctors[1] following strict conditions. (See Guideline of The Malaysian Medical Council, MMC Guideline 008/2006 regarding Brain Death issued by the Malaysian Medical Council)

Before we discuss the issue of brain death, we will first discuss the rulings regarding to killing from Islamic perspective. It is prohibited for Muslims to kill anyone and it is considered as one of the greatest sins (al-Kabair) in Islam. This is in accordance with the statement of Allah SWT:

“And do not kill the soul which Allah has forbidden, except by right. And whoever is killed unjustly - We have given his heir authority, but let him not exceed limits in [the matter of] taking life. Indeed, he has been supported [by the law].”

Furthermore, according to the opinion of scholars, anyone who commits murder would be punished in hell. Allah SWT states:

“But whoever kills a believer intentionally - his recompense is Hell, wherein he will abide eternally, and Allah has become angry with him and has cursed him and has prepared for him a great punishment.”

When discussing the issue of brain death, the biggest concern would be whether it is permissible to stop or switching off the life support system that the patient depends on to stay alive?

Regarding this issue, there are two opinions that should be analysed:

“And never is it for a believer to kill a believer except by mistake.”

The same is mentioned in another statement of Allah SWT we stated above, where there is a clear prohibition of killing another human being. The reason is, a person is considered still alive as long as his heart is still beating (even if it is with the help of machines).

In another verse of the Quran, Allah SWT states:

“Or have you thought that the companions of the cave and the inscription were, among Our signs, a wonder? [Mention] when the youths retreated to the cave and said, "Our Lord, grant us from Yourself mercy and prepare for us from our affair right guidance." So, We cast [a cover of sleep] over their ears within the cave for a number of years. Then We awakened them that We might show which of the two factions was most precise in calculating what [extent] they had remained in time.”

Wajh al-Dalalah (indication of the evidence) of when Allah SWT said  بَعَثۡنَٰهُمۡ which means “We awakened them”. This phrase becomes the evidence that supports even if one’s senses are lost, he is not considered as dead.

Moreover, according to fiqh; اليقين لا يزول بالشك which means; which is established with certainty is not removed by doubt. Death is not a certainty even if his brain has stopped functioning for the person’s heart is still beating which is the cause of the doubt. Hence, no one can be certain that someone is dead unless he has really died (All physical functions have stopped – which includes the beating of his heart).

In fiqh, it is also stated; الأصل بقاء ما كان على ما كان which means; The original ruling of something is its original ruling (of permissibility). A sick person is originally alive and will remain alive until his soul departed from his body.

Among the scholars that hold this first opinion is:

This is in accordance with a hadith from Amru bin Maimun, during the incident of the stabbing of Amir al-Mukminin Umar bin al-Khattab RA:

Companions at the time no longer try to treat Saidina Umar RA, for they know there are no hope for him. This story is an evidence used to support:

“Indeed, life is but borrowed time, as if it never existed.”

However, the decision to determine the death of a brain-dead patient should be done by two specialist doctors of the medical field. A patient is only certified dead after a thorough and comprehensive analysis following strict conditions.

Among the scholars who hold this opinion are:

Fatwa Issued by Fatwa Bodies Regarding the Issue of Brain Death

"Muzakarah also decides that in the medical field, brain death is considered to be a death and when the death is confirmed by the expert, then it will follow all rulings relating to death set by the syara’. Hence, it is necessary to stop the support assistance treatment (eg; the use of ventilator machine) with the consent of the next-of-kin after being confirmed by two physicians who are not involved in the organ donation deal. "[3]

After analysing and acknowledging both opinions of scholars regarding this issue, in our opinion brain death is considered as death. The reasons of our opinion are:

Hence, we are inclined to state brain death is considered as death following the strict guidelines and conditions set by medical experts.

May this explanation give us understanding and remind us that death is a certainty in every person’s lives and we should be prepared by doing good deeds and worship before we meet Allah SWT. Amin.