IRSYAD AL-FATWA SERIES 299: THE RULING FOR SETTING A CONDITION OF NOT ALLOWING FUTURE HUSBAND TO PRACTISE POLYGAMY 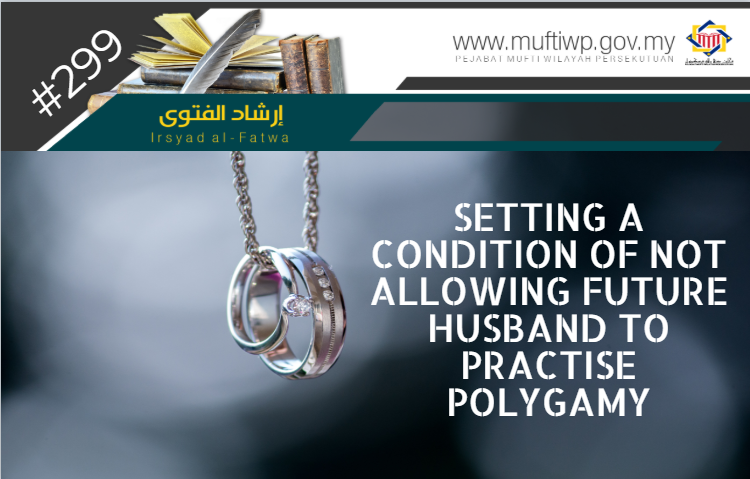 Assalamualaikum. What is the ruling for a wife to set a condition, so that her husband cannot practise polygamy? Is this condition valid according to syarak, and should the husband comply with the condition?

Scholars have discussed this issue in their compositions and here we include their opinions:

According to Akmal al-Din al-Babarti, this type of condition is fasid, for it prohibits something that is permissible in syarak. However, it does not invalidate the marriage. If the husband complies with the condition, then the wife is given mahar musamma, and if the husband breaks his promise, then the wife is given mahar mitsil. (Refer: Al-‘Inayah Syarh al-Hidayah, 3/350). While, Imam al-Sarakhsi said that it is not necessary to fulfil these types of condition. (Refer: Al-Mabsuth, 19/120)

According to Imam Malik, this condition is batil (a form of falsehood), but the marriage is valid. He cited the opinion of Sa’id ibn Musayyib that states a marriage with this condition is valid and permissible. Moreover, there is an athar narrated by Al-Laith ibn Sa’ad during the time of Umar al-Khattab; there was a man that married a woman that set a condition where the man cannot take her out of her state of residence. When Saidina Umar heard about this, he lifted the condition but declared the marriage as valid. (Refer: Al-Mudawwanah, 2/131)

Khalil ibn Ishaq al-Jundi states that it is makruh (undesirable) for a wife to set conditions such as not allowing polygamy for her husband, or she is not to be brought to war or out of her house and others like it and Imam Malik had asked judges to prohibit such conditions. (Refer: Al-Taudhih fi Syarh Mukhtasar Ibn al-Hajib, 4/181)

According to the scholars of mazhab Syafie, which are Imam al-Nawawi, Ibn Hajar al-Haitami, Imam Khathib al-Syarbini and Syeikh Zakariyya al-Ansari, this type of condition is fasid, which will in turn change the mahar into fasid, but it does not invalidate the marriage itself. (Refer: Raudhah al-Talibin, 7/265; Tuhfah al-Muhtaj, 7/312 and 387; Mughni al-Muhtaj, 4/377 and Al-Ghurar al-Bahiyyah, 4/186)

Ibnu Qudamah said, the conditions of a marriage are divided into three; one of it is the obligation of a husband to fulfil the maslahah (interest and need) of the wife, such as when she sets a condition that the husband cannot practise polygamy, or she is not to be brought along for travels or war. If her condition is not fulfilled, then she has a right to demand fasakh. This opinion is narrated from Umar al-Khattab, Sa’ad bin Abi Waqqas, Mu’awiyah, Amru bin al-‘Aas R.Anhum, Syuraih, Umar bin Abdul Aziz, Thawus and al-Auza’ie. He further adds that this is the opinion of the companions and he did not find any contradiction towards this opinion regarding this issue and thus, this is the agreed opinion by scholars.

“The Muslims will be held to their conditions,”

The claim that conditions such as this is a form of prohibiting what is permissible is incorrect, for it is a choice for the wife, whether or not she wants to ask for fasakh if her conditions are not fulfilled. However, it is not permissible to set a condition for her future husband to divorce his current wife, for there is a clear prophetic prohibition regarding this matter:

“A woman must not ask to have her sister divorced in order to deprive her of what belongs to her, but she must marry, because she will have what Allah has decreed for her.”

Whereas, Imam al-Marwadi considers it as a valid condition that should be fulfilled, and if the husband breaks his promise, then the wife has a right to claim fasakh. (Refer: Al-Insaf fi Ma’rifati al-Rajih min al-Khilaf, 20/390; and Imam al-Buhuti, Kasyaf al-Qina’, 5/91)

Syeikhul Islam Ibn Taimiyyah was once asked a question regarding this issue and he answered, the condition is valid, and the husband must comply with the condition. Among the evidences that he used to support his statement is the words of Umar al-Khattab, where he was presented with a case of a husband and wife who has agreed that the husband would not practise polygamy, he affirmed the condition saying:

“The rights of someone is the conditions he has set,” Refer: Al-Fatawa al-Kubra, (3/90)

According to a qaul of Imam Ahmad and accepted by the majority of scholars of mazhab Hanbali, fulfilling the condition is sunnah, and the wife has a right to claim fasakh if her husband does not comply with her conditions. Syeikhul Islam Ibn Taimiyyah chose the sound opinion that obligates it.

However, if the wife chooses to be patient and accepts her conditions being unfulfilled, she no longer has the right to claim fasakh. Furthermore, it is impermissible for both husband and wife to set a condition that the other cannot remarry after they have divorced or one of them died.

“The scholars have differing opinions regarding the ruling of fulfilling this type of conditions, such as a husband cannot practise polygamy, or he cannot bring his wife to war or move out from his wife’s place of residence. Al-Auza’ie and Ibn Syubrumah said that a wife has a right to set these conditions and the husband must comply with her conditions. Ibn Shihab said most scholars hold this opinion. Their qaul is from the narration of Ali and Umar RA. The factor for their differing opinions is from the contradiction between a general evidence and a specified evidence. The general prophetic evidence is a hadith from ‘Aisyah R.Anha:

“Why do some people impose conditions which are not present in Allah's Book (Laws)? Whoever imposes such a condition as is not in Allah's Laws, then that condition is invalid even if he imposes one hundred conditions, for Allah's conditions are more binding and reliable.”

Whereas the specific evidence is a hadith from ‘Uqbah bin Amir:

Both hadiths are sahih, however, according to scholars the specified evidence is prioritized and in this case; it is obligatory to fulfil the conditions set by the wife and agreed by the husband.” (Refer: Bidayah al-Mujtahid, 3/81-82)

In conclusion, we are inclined towards the opinion that ruled it permissible for a wife to set the condition that her future husband is not allowed to practise polygamy and the husband must comply with her conditions to maintain the harmony in marriage.

However, at the same time, conditions set by humans are not absolute and can be changed or amended. Tolerance and forgiveness are important in various situations and sincere discussions between husband and wife would surely have a positive end. Thus, even if the wife has a right to claim fasakh if her husband breaks his promise, a decision shall be made only after thinking things through with rational consideration.

We end with a doa taught to us by Allah SWT:

“Our Lord, grant us from among our wives and offspring comfort to our eyes and make us an example for the righteous.”