AL-IRSYAD AL-FATWA SERIES 313: FARTED WHEN ONE IS CALLING OUT THE ADHAN: IS THE ADHAN VALID? 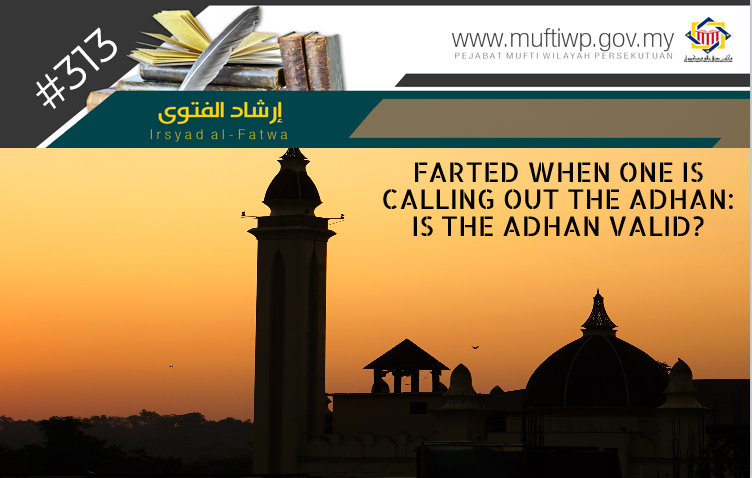 Assalamualaikum ustaz. How are you? Hope that you are in great health. I have a question. I am a bilal of a mosque. One day, when I was calling out the adhan, I accidentally farted. Should I just continue calling out the adhan or stop immediately to perform the ablution again? I hope for an explanation from ustaz.

Adhan is one of the great eminences of Islam. In Islam, adhan is specific words called out to announce that the time of obligatory prayer has started. This is in accordance with a hadith from Malik bin al-Huwairith. He said:

“I came to the Messenger of Allah (ﷺ) along with a companion of mine, and when we intended to return from him, he said: When there is time for prayer, announce prayer, pronounce Iqama, and the oldest amongst you should lead the prayer.”

Imam al-Nawawi states that the above hadith is an evidence for the obligatory ruling of maintaining the calling out of adhan whether one is residing or travelling, for it is an eminence of Islam.

Although it may seem like a trivial matter, it is an important aspect as one of the eminences of Islam that should not be neglected. The Prophet PBUH himself, encouraged his ummah to be among those who calls out the adhan. This is stated in a hadith from Abu Hurairah RA, he said the Prophet PBUH said:

There are however, several conditions that should be fulfilled or the adhan that is called will be invalid. The conditions are as the following:

Thus, if any of the conditions is unfulfilled, then the adhan is invalid.

Coming back to the question asked, if someone farted while he is calling out the adhan, or his ablution become invalid, then the adhan is still valid. The reason is, being in a pure state is not among the valid conditions of adhan. Someone who call out the adhan without first taking his ablution, then the adhan is still valid but his action is makruh (undesirable). This is in accordance with the hadith of the Prophet PBUH:

“I disliked remembering Allah except in the state of purification.”

Imam al-Nawawi cited the words of Imam al-Syafie where he states, if someone starts calling out the adhan when he is in a pure state, then his ablution is invalidated, he should just continue with the adhan and not stop the adhan. However, if he chooses to stop to retake his ablution, then he could resume the adhan where he stopped earlier but it is prioritized for him to start the adhan again.

Imam al-Nawawi continues his explanation stating that the opinion of the scholars of mazhab Syafie agreed that the muezzin should begin the adhan again and not resume his adhan so that the public will not assume that he is disrespecting the adhan. (Refer Al-Majmu’ Syarh Al-Muhazzab, 3/98)

It is the same if he went to retake his ablution, no one can continue the adhan. Al-Khatib al-Syarbini said:

“One of the conditions of adhan is it must be called out by just one muezzin. No one can continue an adhan of someone else, for if this happens, it will cause confusion.” (Refer Mughni Al-Muhtaj Ila Ma’rifah Ma’ani Alfaz Al-Minhaj, 1/136)

May Allah SWT give us the understanding in our religion. Wallhua’lam.