IRSYAD AL-FATWA SERIES 338: IS IT PERMISSIBLE TO USE WATER FROM WATER TANK THAT WAS FULL OF THE CARCASS OF RATS FOR PURIFICATION? 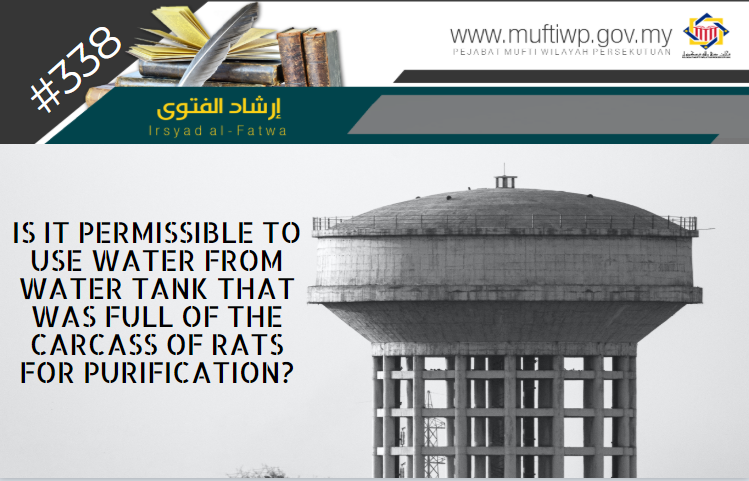 Assalamualaikum SS Dato’ Seri Mufti, I provide a cleaning service for water tanks supplying water to houses where the water is used in toilets or restrooms. The size of these tanks varies according to the type of houses in certain residential areas.

The situation that I usually encounter with are that I would sometimes find carcasses of rats, lizards, birds or slimy stinky moss.

I feel that this is an important situation to be highlighted and I should find the answer for it involves the matters of purification, ablution and prayer as well as purification of minor and major hadas. It is my great hope that I could convey the right information to the public so that they are more concerned in matters of the purity of water that they use in their daily lives. Thank you for answering my question.

It is an obligation of a Muslim to be concerned and assess his worship especially the related basics in Islam such as purification. It is a manifestation of the statement of Allah SWT:

Syeikh Mustafa al-Maraghi in his commentary state that believers are those who are wary and cautious of the cleanliness of his soul and body for his great love to purify them both. They consider these two matters as the completeness of man. Thus, they dislike any filth, impurities and najis on the body, clothing or even filth of one’s heart which are sins and transgressions towards Allah SWT.

“…and sent down upon you from the sky, rain by which to purify you,”

The jurists divided water into three types. Water that is pure and purifying (طاهر مطهّر), pure but not purifying (طاهر غير مطهر) and water mixed with najis (متنجّس). These divisions are important because not all types of water can be used for purification. These divisions are made according to the evidences in the Quran and hadith of the Prophet PBUH. (Refer Al-Mu’tamad Fi Al-Fiqh Al-Syafi’i,1/37)

Coming back to the question presented, animal carcasses such as rats, birds, lizards and others are considered as najis. Thus, if any of them fell into a water tank and it changes the colour, smell or taste of the water, then the water inside the tank is najis. It cannot be used for ablution or obligatory bath. This is in accordance with a hadith narrated by Abu Umamah, where the prophet PBUH said:

“Water cannot be rendered impure by anything except something which changes its smell, taste and colour”.

Narrated by al-Baihaqi (1274) in al-Sunan al-Kubra

However, if the najis did not change any feature of the water whether its colour, smell or taste, then scholars differentiate the rulings into two situations:

However, if the water reaches the volume of two kullah or in other words are in a large volume, but the najis changes its smell, color or taste, then it is considered as najis. This is the opinion presented by Imam al-Nawawi. He cited the opinion of the majority of scholars from madhhab Syafi’e, where they agreed that regardless of whether the water is a lot or in a small amount, flows or stagnant, if the najis changes any of the water’s attributes of smell, colour or taste, then the water is najis. (Refer Al-Majmu’ Syarh Al-Muhazzab, 1/160)

To conclude, if the volume of water exceeds two kullah or approximately 200 litres or 52 gallons, then the najis inside the tank will not affect the purity of the water on the condition that it does not change the taste, smell or colour of the water. If the najis changes the three features of water, then it is ruled as najis. It cannot be used for purification such as ablution or obligatory bath.

What we stated here is only if any of features are changed with certainty. This is in accordance with the Islamic legal maxim:

“Certainty cannot be abrogated by doubt,”

As for if there is doubt on the water, then the water remains pure and is permissible to be used for ablution and others. The reason is, the original ruling of the purity of water remains until it is proven that there is najis that changes the water’s features, such as there is a responsible individual who informed that the water has changed because of najis. This is according to the maxim:

“The original ruling of something is the same as its preceding ruling.”

May Allah SWT give us understanding in His religion. Wallahu a’lam.

[1] Kullah is a traditional way to measure the volume of water. If converted to the modern unit, two kullah is equivalent to 200 kg or 204 kg which is approximately 200 litres. (Refer Al-Mu’tamad Fi Al-Fiqh Al-Syafi’i, 1/41)

We have discussed on the issue of two kullah previously in Al-Kafi Sereis 1263. The article can be accessed through the following link https://muftiwp.gov.my/en/artikel/al-kafi-li-al-fatawi/3413-al-kafi-1263-hukum-menyelam-ke-dalam-air-yang-kurang-daripada-dua-kolah