IRSYAD AL-FATWA SERIES 340: THE RULING OF RECITING AL-QURAN DURING PROSTRATION 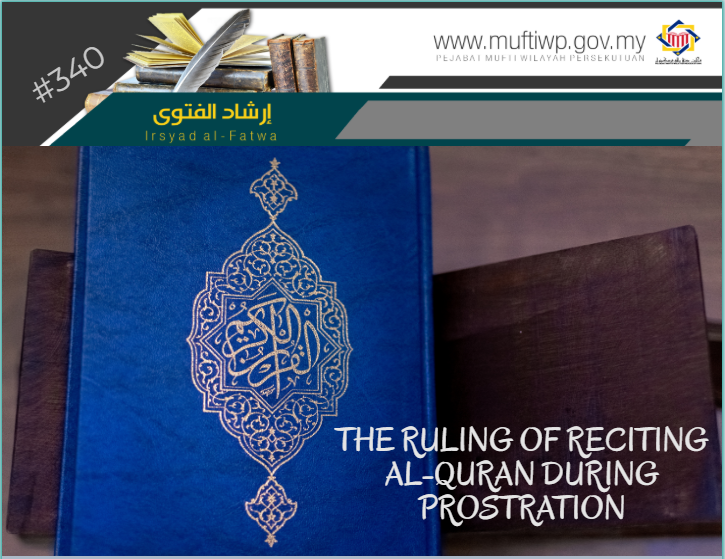 Regarding the issue of reciting the Quran during prostration, there are several evidences that restricts this action. This is in accordance with a hadith narrated by Ibn Abbas R.Anhuma, where the Prophet PBUH said:

“And see that I have been forbidden to recite the Qur'an in the state of bowing and prostration. So far as Ruk'u is concerned, extol in it the Great and Glorious Lord, and while prostrating yourselves be earnest in supplication,”

The above hadith explained the restriction of the Prophet PBUH which specifies only supplication is permissible for prostration. While the recitation of al-Quran is only permissible when one is in the state of qiyam (standing) in prayer.

Imam al-Nawawi explained the situations when it is makruh (undesirable) to recite the Quran:

“It is makruh (undesirable) to recite (the Quran) in rukuk (bowing), sujud (prostaration), tasyahhud and in other situations in prayer except when one is in qiyam (standing).” Refer Al-Tibyan fi Adab Hamalat Al-Quran, Al-Nawawi (pg. 117)

The scholars discuss the wisdoms of the restriction of reciting al-Quran during prostration. Among the opinions is as stated by Syeikh Syas al-Haq al-‘Azhim where he cited the words of Ibn al-Malik:

However, if the recitation of the verses of the Quran is recited as a supplication and not for the intention of reciting the Quran, then it is permissible. The reason is, this situation is similar to the prohibition from reciting the Quran in major impure state (janabah or menstruation). Imam al-Nawawi said:

“A person who is in a state of janabah or menstruating women are prohibited from reciting the Quran, whether it is just a verse or less than that.”

However, there is an exception on the prohibition of reciting the Quran in the state of janabah if it is recited with the intention of zikr (remembrance of Allah). Imam al-Nawawi cited the words of Imam al-Haramain Abd al-Malik al-Juwaini who said:

Thus, we could relate the act of a person reciting the Quran during prostration using the verses of the Quran as a supplication is permissible, if he recites it with the intention of supplicating. This is the same as reciting supplication taken from the Quran:

The same is permissible for the recitation of the verses of the Quran which the Prophet PBUH described as supplication, such as the words of the Prophet Jonah AS which is recorded in the Quran:

"There is no deity except You; exalted are You. Indeed, I have been of the wrongdoers."

Referring to the above evidence, the verse is clearly described by the Prophet PBUH as a supplication according to a hadith narrated by Sa’d bin Abi Waqqash RA, where the Prophet PBUH said:

“The supplication of Dhun-Nun (Prophet Yunus) when he supplicated, while in the belly of the whale was: ‘There is none worthy of worship except You, Glory to You, Indeed, I have been of the transgressors. (Lā ilāha illā anta subḥānaka innī kuntu minaẓ-ẓālimīn)’ So indeed, no Muslim man supplicates with it for anything, ever, except Allah responds to him.”

Moreover, we would like to state that it is permissible to recite the statement of Allah SWT as the following during prostration with the intention of supplication:

“And I entrust my affair to Allah.”

This is the words uttered by a Mukmin who is the follower of the Prophet Moses AS. Although such statements and also the statement of the Prophet Jonah AS before are not preceded by the elements of طلب (request), however, it is still permissible to be recited for the attribute of a supplication does not include that it must has the elements of request. The reason is, the word supplication in the Quran have several meanings:

Thus, if entrusting oneself completely to Allah such as tawakkal (placing all your trust and hope) to Allah, then it is the same with the attribute of supplication when exiting one’s house narrated by Anas bin Malik RA, where the Prophet PBUH said:

“When a man goes out of his house and says: "In the name of Allah, I trust in Allah; there is no might and no power but in Allah,"

We would also like to add that it is permissible to recite the following verse during prostration with the same arguments presented for verse 44 surah Ghafir, which is the statement of Allah SWT:

"Sufficient for us is Allah, and [He is] the best Disposer of affairs."

The reason is, the verse is attributed as a supplication recited by the Prophet Abraham AS when he was thrown into the fire. This is mentioned in a hadith narrated by Ibn Abbas R.Anhuma, where he said:

“(The verse) was said by Abraham when he was thrown into the fire,”

To conclude, we would like to state that the ruling of reciting the verses of the Quran during prostration in prayer with the intention of the recitation as the recitation of the Quran is makruh (undesirable). This is according to the above arguments and evidences presented. Furthermore, we would like state that the Quran is the noble kalamullah, thus, among the manners of it is we should not recite it in our lowest position in prayer which is when we are prostrating.

Lastly, we pray to Allah SWT so that we are given the correct understanding in practising religion. Amin.