IRSYAD AL-FATWA SERIES 342: IS DREAM A CONDITION AS THE ANSWER FOR ISTIKHARAH? 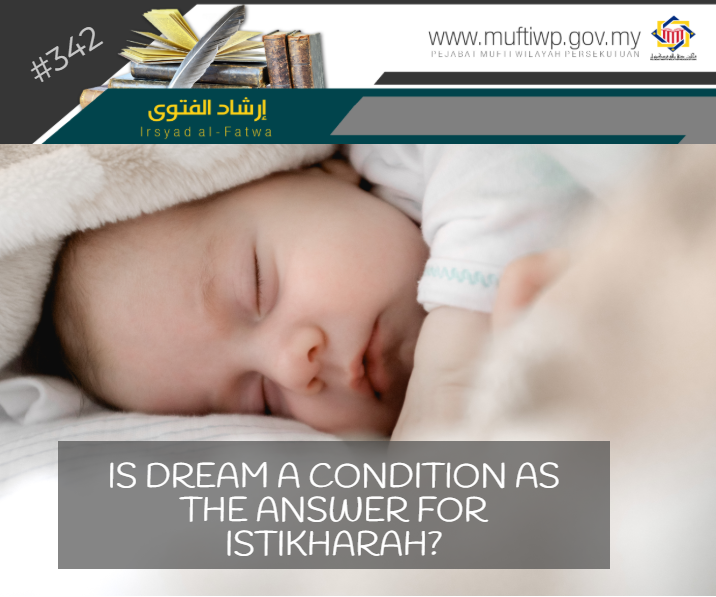 Assalamualaikum SS Datuk Mufti. I want to ask, is dream a condition as the answer for istikharah I have performed?

Hope for an explanation from SS Datuk Mufti. Thank you.

“And seek help through patience and prayer,”

Istikharah is sunnah according to the ijma’ of the scholars according to a hadith narrated by al-Bukhari from Saidina Jabir RA:

“The Prophet PBUH used to teach us the way of doing Istikhara (Istikhara means to ask Allah to guide one to the right sort of action concerning any job or a deed), in all matters as he taught us the Suras of the Qur'an. He said, "If anyone of you thinks of doing any job, he should offer a two rak`at prayer other than the compulsory ones and say (after the prayer): --

O Allah! I ask guidance from Your knowledge, And Power from Your Might and I ask for Your great blessings. You are capable and I am not. You know and I do not and You know the unseen.

O Allah! If You know that this job is good for my religion and my subsistence and in my Hereafter--(or said: If it is better for my present and later needs)--Then You ordain it for me and make it easy for me to get, And then bless me in it,

and if You know that this job is harmful to me in my religion and subsistence and in the Hereafter--(or said: If it is worse for my present and later needs) --Then keep it away from me and let me be away from it. And ordain for me whatever is good for me, and make me satisfied with it).”

Moreover, it should be reminded that istikharah should not be performed when choosing between obedience or transgression, the permissible or prohibited, the prioritized or less prioritized, however, it is a choice between choices of the same status or goodness. When a person performs istikharah, then Allah SWT will grant him taufiq and hidayah (guidance) for him to fulfil his affairs the best way for him. For further reading on istikharah and the methodology to perform it, we have discussed it in detail in al-Kafi #829: What is Istikharah?

However, our society believes that an answer for the istikharah a person performed will come in the form of a dream when he went to sleep. This is the claim of many people that a person would see one of the choices in his dream, and he will make a choice based on this dream. However, it has no basis in syarak and it is not a condition that the answer for istikharah is only through dreams.

Furthermore, scholars said that Allah SWT will bless guidance to anyone who performs istikharah by feel at ease in his chest and heart when making a choice. This is stated by Imam al-Nawawi in his book al-Adzkar, where he said:

“And when a person has completed istikharah, then he should manage his affairs according to what he feels at ease with when he is making the choice. Wallahua’lam.” (Refer al-Adzkar al-Nawawiyyah, 2:241)

Then, he should raise from performing istikharah according to what he feels at ease with. (Refer al-Majmu’ Syarh al-Muhazzab, 3:546)

However, if he is still unsure of which choice he should make, then he should repeat the istikharah until he feels at ease to make a choice. If he is still uncertain and in doubt as to which choice he has to make, then if it is possible for him to delay from making the choice then he should delay from making the choice. However, if it is not possible to delay it, then he should continue with his affairs according to what is the easiest for him. This is stated by Ibn ‘Illan in his book al-Futuhat al-Rabbaniyyah ‘ala al-Adzkar al-Nawawiyyah:

“If he still has ill feelings and unsure as to which choice he has to make, then what is apparent to us is that he should repeat his istikharah by repeating his prayer and supplicates so that he will feel at ease in making his decision after repeating his prayer, if it is possible for him to delay from making his decision, then he should delay it first. If he is unable to postpone it, then he should continue with his affairs with which is easiest to him, indeed it is a sign from Allah SWT and goodness. Wallahua’lam.” (Refer al-Futuhat al-Rabbaniyyah, 2:241)

According to the above discussion, we conclude that having a dream is not a condition of getting an answer regarding an istikharah performed, where in truth an answer for istikharah does not need any sign except the feelings of ease in one’s heart and ease in his affairs.

Thus, after a person performed istikharah, he should manage his affairs just like usual according to what he feels at ease with and what is the easiest for him without waiting for an answer in the form of dreams or other similar to it. The reason is istikharah is performed to ask for a good ending from Allah SWT in an effort we are pursuing. Indeed, a person will never regret or be disappointed if he performed istikharah and istisyarah to Allah SWT according to a hadith where the Prophet PBUH said:

“None who performed istikharah will face regret, none who ask for advice will have regrets, and none from the poor are from those who lives moderately,”

May Allah SWT gives us the true understanding and guidance so that we can practise His commandments in our lives. Amin.