IRSYAD AL-FATWA SERIES 350: DEMANDING FOR THE RETURN OF RING AND BRACELET GIVEN DURING MARRIAGE AFTER DIVORCE 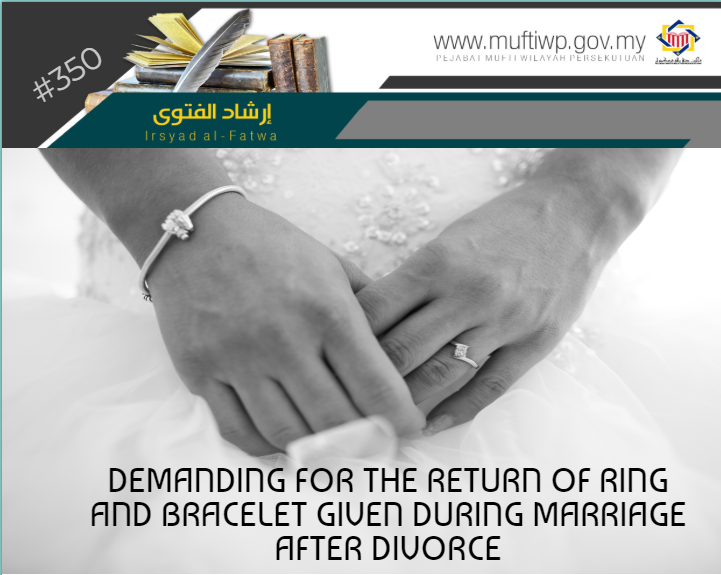 I have a question. Is it permissible (what is the ruling of) an ex-husband asking the ex-wife to return back the ring and bracelet which were given during solemnization when divorce happens? Maskahwin has been given separately according to the state’s law (RM300).

What is the status of the given jewelry? It is the absolute right of a wife, isn’t it? For your information, the divorce is through court’s permission and my ex-husband asked for the jewelry, it was when we both decided to divorce before I apply for fast track divorce from the court.

Also, is the practice of asking back the gifts during solemnization a state’s custom since my ex-husband is not from Selangor like me, but a Malaccan?

Hope for an explanation. Thank you.

We do not find any law documents which state and support the claim that it is a custom of some states to return gifts during solemnization back to the husband. However, here we state under the chapter of betrothal, Section 15 of Islamic Family Law (Federal Territory) Act 1984 which states:

“If any person has, either orally or in writing, and either personally or through an intermediary, entered into a betrothal in accordance with Hukum Syara', and subsequently refuses without lawful reason to marry the other party, the other party being willing to marry, the party in default shall be liable to return the betrothal gifts, if any, or the value thereof and to pay whatever money have been expended in good faith by or for the other party in preparation for the marriage, and the same may be recovered by action in the Court.

Since this issue is related to marriage and divorce, we do not discuss on the betrothal gifts. Hereby, we state the comparison of the “custom” with some concepts in rulings pertaining to marriage.

No compensation upon women

In one aspect, the custom if being imposed forcefully upon the woman, it is a form of munkar bid’ah. This is because, according to the Shari’ah laws, the man is the one who should compensate through mut’ah to the wife and it shall not be taken from the divorced wife. Allah SWT say:

According to the scholars, this verse gives 4 indications:

And for divorced women is a provision according to what is acceptable - a duty upon the righteous.

This verse contains the lam al-tamlik, which indicates ownership, with a rate decided through customary law (‘uruf). So, non-obligatory matter’s rate is not decided, except it is among the obligations. Therefore, whoever forbids it is not among the righteous people, hence, giving it is an obligation.

Through this dalil, it is clear that the obligation of giving compensation for divorce is not the responsibility of an ex-wife, but rather an ex-husband’s.

Claiming back gifts is prohibited (haram)

According to the scholars, it is not permissible for a giver to claim back gifts given, except al-asl (father, mother, grandfather and grandmother) asking from al-far’ (children and grandchildren), also gifts with condition.

The dalil is from the story of Ibn Umar and Ibn Abbas radhiallahu ‘anhum – in which they bring forward a case to the Prophet PBUH, then he said:

The Prophet (ﷺ) said: It is not lawful for a man to make a donation or give a gift and then take it back, except a father regarding what he gives his child. One who gives a gift and then takes it back is like a dog which eats and vomits when it is full, then returns to its vomit.

The jurists said, eating back the vomit is haram, and so is the attitude of taking back gifts.

Mahar(dowry) and dissolution of marriage through khulu’

A husband may only ask back the gifts given during solemnization if the registration of divorce is by khulu’. According to Imam al-Nawawi, “khulu’” means dissolution of marriage with a redemption, by pronouncing words of talak or khulu’. Refer Minhaj al-Tolibin (ms. 226). Allah SWT’s statement:

But if you fear that they will not keep [within] the limits of Allah, then there is no blame upon either of them concerning that by which she ransoms herself.

Divorce by khulu’ should consist of sighah ijab and qabul between both husband and wife intended to divorce, like the husband pronounces, “I divorce you with the redemption of the bracelet of our solemnization”, then the wife reply, “I accept”, or, the wife pronounces, “Divorce me, then I will give back the bracelet of our solemnization”. If the ijab and qabul is valid, then the divorce by khulu’ will be valid and it is obligatory for the wife to give the redemption claimed.

Meanwhile, for mahar (dowry), it is an absolute right of the wife. Asking it back without the reason of khulu’ is prohibited (haram) and sinful. Allah SWT also curse the husbands who take back the mahar given to their wife. Allah SWT say:

But if you want to replace one wife with another and you have given one of them a great amount [in gifts], do not take [back] from it anything. Would you take it in injustice and manifest sin? (20) And how could you take it while you have gone in unto each other and they have taken from you a solemn covenant? (21)

We already discussed on the issue of mahar and it may be referred through Irsyad Al-Fatwa Ke-198 : Hukum Suami Menggunakan Mahar Yang Telah Diberikan Kepada Isteri (Irsyad al-Fatwa Series 198: The Ruling of a Husband Using Mahar Given to the Wife)

Based on the above facts and explanation, we are of the opinion as the following:

May this explanation give some enlightenment towards the one who asked. Wallahua’lam.