IRSYAD AL FATWA SERIES 351: THE RULING OF A WOMAN AND A MAN RIDING A LIFT TOGETHER 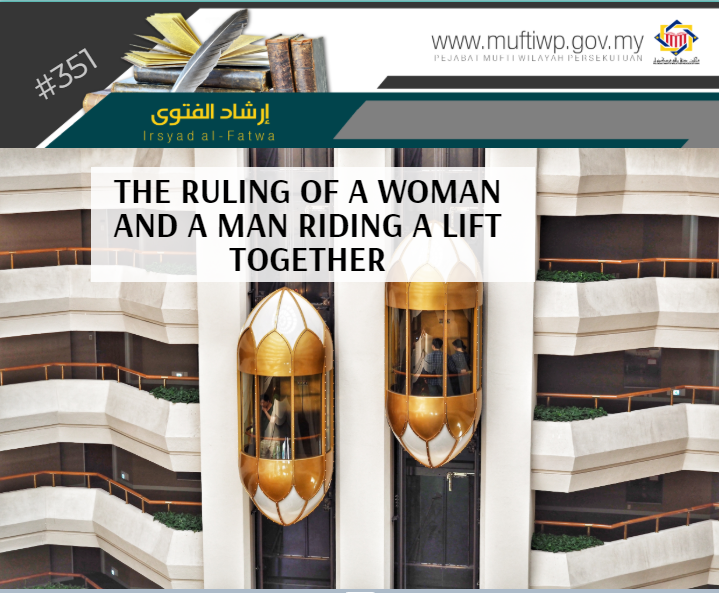 I’m sorry for disturbing Datuk Mufti but I have a question. Is it permissible for a woman to ride the elevator with an ajnabi man together alone? This situation usually happen to me since I’m working in a company and my office is at level 13. Hope for an explanation from Datuk.

We start with the statement of the Prophet PBUH:

" No person (man) should be alone with a woman except when there is a Mahram with her."

This hadith clearly shows that the act of a man and a woman who are non-mahram being in close proximity is prohibited in Islam.

Coming back to the question asked, we see that it is closely related to the ruling of a man and a woman being in close proximity with each other. Before we discuss this matter further, to get additional information, you can access our previous articles in:

Imam al-Nawawi when commenting on the above hadith said:

“A man should not sit together with a woman unless her mahram is with her… And if an ajnabi man is in suspicious close proximity with an ajnabiyyah woman without the presence of a third person, then the action is haram according to the consensus of scholars. The same for (the ruling) if a woman is with a person where she will not feel ashamed because the person is too young such as a boy of two or three years old or other equivalent for the presence of the child is negligible.” [See al-Minhaj Syarh Sahih Muslim (9/109)]

Ibnu Hajar al-Haitami stated that if a woman and ajnabi man live in the same house separately in two different rooms or one is living in the first floor and the other in the second floor or one is living in the main living quarters while the other in a room, then they have to fulfil the condition that they are not to share any facility such as kitchen, toilet, well (bathroom), head space of a ceiling, or the stairs. If they share any one of the facilities stated, then it is haram for them to live together for it will lead to khalwat (suspicious close proximity) which is haram. The same is applicable (haram) when the facilities are separate but the door separating them are not locked or left opened and be made into a walkway for either one of them. As for the prohibition of sharing a walkway is lifted with the presence of mahram. [See al-Fatawa al-Fiqhiyyah al-Kubra (4/106-107)]

Furthermore, among the wisdoms of the prohibition for an ajnabi man to be alone with an ajnabiyyah woman is because it could lead to fitnah, bad assumptions and prejudice of others which is a greater harm such as falling into sin, fornication and the destruction of the family institution. The reason is the act of khalwat (alone in close proximity) itself is a great opportunity for shaytan to harm the children of Adam and cause a great fitnah on them. This is in line with the words of the Prophet PBUH:

“A man is not alone with a woman unless the third of them is the shaytan.”

Syeikh al-Mubarakfuri when commenting on the above hadith stated that shaytan will be with them (man and woman who are committing khalwat) and whispers desires to them until they fall into the sin of fornication. [See Tuhfah al-Ahwazi (6/320)]

Fiqh scholars stated several exceptions of situations where a man and an ajnabiyyah woman is permissible to be alone. In this matter, Imam al-Nawawi stated the exceptions for this issue (non-Mahram being alone together) is in all exigent situations such as if a man found a woman who is lost and similar situations, then it is permissible for him to accompany the woman. Furthermore, it is a commandment for him if he is worried about the safety of the woman if he left her alone. In this situation there is no khilaf and this is in accordance with the hadith of Aisyah R.Anha regarding the incident of al-Ifk (slander). [See al-Minhaj Syarh Sahih Muslim (9/109)]

Safe from any accusation, fitnah and prejudice

Scholars have set a guideline (parameter) in determining khalwat which is prohibited in Islam.

“Indeed, the guideline in determining khalwat (which is prohibited) is an assembly (of non-mahram man and woman) which is not normally safe from any accusation (fitnah and prejudice), it is different when a person is sure that the meet is normally safe from any accusation, then it is not included as khalwat (that is prohibited).” [See Hasyiah Nihayah al-Muhtaj (7/163), and Hasyiah Tuhfah al-Muhtaj (8/269)]

Abu Said al-Khadimi stated that a man is not permitted to talk with an ajnabiyyah woman without any need for it could lead to fitnah. However, if there is a need such as a witness or trade or dakwah, then it is permissible. [See Bariqah Mahmudiyah (4/7)]

The same is stated by Ibnu Hajar al-Asqalani who states in his book that it is permissible for a man to offer salam to a woman and vice versa on the condition that it is safe from fitnah (accusation, prejudice and others similar to it). [See Fathu al-Bari (11/33)]

Likewise, Ibnu Hajar al-Haitami stated that if a woman enters a mosque where there is a man, then it is not included in the category of khalwat for a mosque is a place that is always visited by people… And indeed, this is permissible for mosque which is always frequented by people and there will always be people entering and leaving it. The same (ruling) is for roads or similar places (other public places) which is a walkway of people, different with places that is deserted and quiet. [See Tuhfah al-Muhtaj (8/269-270)]

Thus, it is understood that a place where it is always busy with people would normally be safe from fitnah (bad assumptions). Hence, for other public places such as a busy road, playground and gardens where a lot of people frequented and safe from fitnah.

Opposite Gender Being Alone in A Lift

We view the situation of lifts in companies or residential areas or others similar situations is categorized as public facilities that is equipped for the public. Thus, we divided the situation into two:

Even so, there is a facilitation given where it is permissible to be alone with a thiqah (trustworthy) man with two or more thiqah women, where the women are respected by the man and not the contrary. [See al-Fatawa al-Fiqhiyyah al-Kubra (4/107)]

However, we would like to affirm that this facilitation depends on the guideline that has been set by scholars which is it is safe from fitnah (accusation, prejudice and other similar situations).

After analysing the evidences and opinions of scholars and considering the reality and waqi’ of Malaysia, we conclude the following:

May Allah SWT give us a clear understanding in religion. Amin.