IRSYAD AL-FATWA SERIES 354: IS IT PERMISSIBLE FOR LOCAL AUTHORITIES TO CAPTURE LIVESTOCK THAT ARE ROAMING FREE? 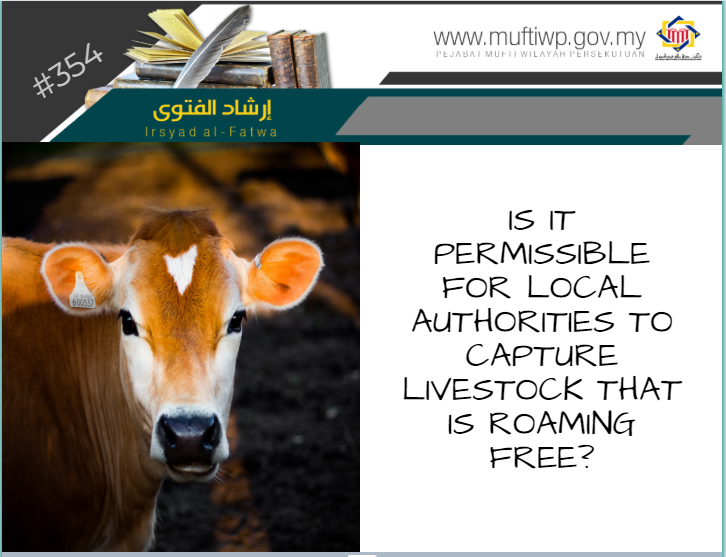 Assalamualaikum Datuk Mufti. Recently, there is news reporting livestock roaming on roads especially on main highways. My question is, is it permissible for local authorities (PBT) to capture this livestock? Is it permissible for them to issue a summon or fine for the owners because they let their livestock loose? Hope for an explanation. Thank you.

The issue regarding livestock roaming freely on roads is not new and this issue has continued till today. This issue should not be taken lightly and actions by all of us in the society is needed for it to be resolved. News outlets have reported numerous tragedies that had befallen road users due to livestock animals being let loose. Among them are:

According to the above news reports, we find that livestock roaming freely on roads are among the causes of fatalities and accidents, which results in loss of life, health and property. Protecting every aspect stated above is included in the main maqasid syariah. This is in accordance with the statement of Allah SWT:

The same is stated in a hadith narrated by Ibn Abbas R.Anhuma, where the Prophet PBUH said:

Similarly, in an Islamic legal maxim, it is stated:

“Harm should be avoided.”

The same is stated in another maxim:

“Preventing harm is prioritized compared to be of benefit.”

Answering the above question, local authorities (PBT) is a body of authority responsible to resolve local issues within their district. It is also their responsibility to analyse and find solutions for every problem that happened. Thus, on the basis of the greater good and the authority on their jurisdiction, then it is permissible for them (PBT) to capture livestock that is let loose, issue a summon or fine to the owners of the livestock who let their livestock roam freely. This is made permissible by syarak considering the greater good of the citizens in general and in maintaining the harmony and safety of its community. This is in line with a famous legal maxim which states:

“Measure (action) taken by a ruler on the citizen must relate to the benefit for all.” (See al-Asybah wa al-Nazhair, Ibn Nujaim, 1/104)

Imam al-Ghazali Rahimahullah said that benefit is a matter that will lead to goodness and prevent harm. (See Al-Mustashfa, al-Ghazali, 2/139)

According to the above meaning, every matter that leads to goodness and prevents harm from people is considered as benefit (maslahah). By capturing this roaming livestock or fining their owners, it is an action that should be taken by the authorities to protect the greater good of the general public. This is in accordance with the above-stated maxims.

In a marfu’ hadith narrated by al-Sya’bi, he said, the Prophet PBUH said:

“If anyone finds an animal whose owners were helpless to provide fodder to it and so they turned it out (of their house), and he took it and looked after it, it will belong to him.”

According to the above hadith, it can be understood that if a cow is found roaming freely and it does not has an owner, or the owner has disregarded it for he is unable to take care of it in terms of providing food and water for his livestock, then it is permissible for the person who found it to take it, own it and benefit from it.

The issue regarding livestock roaming freely or let loose by their owners is a continuous problem from a long time ago. Considering the issue, we feel obliged to recommend several solutions that could be implemented. Thus, the following are our suggestions:

In conclusion, we would like to state that the presence of roaming livestock on roads could lead to disaster and accidents for road users. Local authorities (PBT) is the body of authority responsible in resolving the issue of livestock roaming freely on roads. Thus, on the basis of the greater good, local authorities (PBT) could capture and fine or issue summons to the owners of the livestock. This is permissible on the basis of protecting the safety and greater good of the general public such as preventing loss of lives, health and property.

Hopefully, the above explanation would instil responsibility in all of us so that we would adhere to the laws presented by the authorities. Amin.