IRSYAD AL-FATWA SERIES 361: IS THE PRAYER ON A FLUFFY PRAYING MAT VALID? 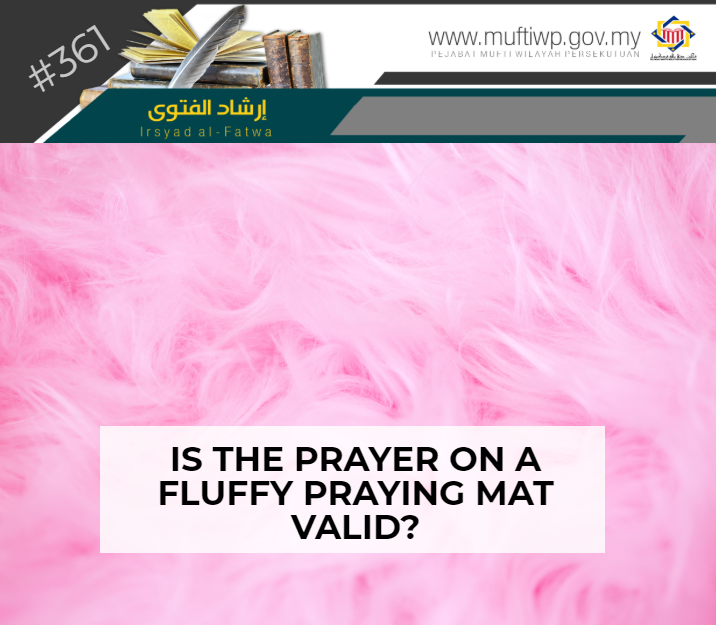 Assalamualaikum. There a lot of varieties for praying mat nowadays on the market. Among them is a very fluffy and soft mat of which a person’s forehead will sink in it. Some people are of the opinion that it will increase a person’s khusyu’ (focus or presence of heart) in prayer. Others said that a person’s prayer is invalid for the forehead is not fixed in one place. My question is, is this permissible and is the prayer valid if a person prays on this fluffy and soft praying mat?

First, placing or using an overlay or throw such as a cloth or praying mat is permissible. The reason is it is done by the Prophet PBUH himself as stated in a hadith narrated by Abu Sa’id al-Khudri RA, where he said:

“I visited the Apostle (ﷺ) and saw him praying on a reed mat on which he was prostrating himself. And I saw him praying in a single garment with ends crossed with each other.”

The same is stated in a hadith narrated by Saidatina Aisyah R. Anha, where she said:

“I was sleeping in front of the Messenger of Allah (ﷺ) with my legs between him and the Qibla. When he prostrated himself, he pinches me and I drew up my legs, and when he stood up, I stretched them out. She said: At that time there were no lamps in the houses.”

Imam al-Bukhari placed the above hadith in the chapter which explained the prayer of the Prophet PBUH on a praying mat (الصلاة على الحصير). Ibn Rajab al-Hanbali when commenting on this hadith said:

“This hadith shows that the Prophet PBUH prostrated at the end of the bed (mat) on which Saidatina Aisyah R. Anha sleeps on and both of her legs are also on the mat.” (Refer Fath al-Bari Syarh Sahih al-Bukhari, 3:27)

However, the basis the Prophet PBUH has set are seven parts that is obligatory to be placed on the place of prostration which are the forehead, both palms, both knees and toes of both feet. In a hadith narrated by Abdullah Ibn ‘Abbas, where the Prophet PBUH said:

This is also stated in al-Syafie fiqh books, among them is Syeikh Hasan al-Kaff who said:

A person should prostrate on seven parts which are: the forehead, both palms, noth knees, and toes on both feet. (Refer al-Taqrirat al-Sadidah fi al-Masail al-Mufidah: 221)

“It is conditioned to firmly fixed his forehead (on the place of prostration), to a degree of which if he prostrated on wool, then the wool will stick on it (his forehead).” (Refer al-Taqrirat al-Sadidah fi al-Masail al-Mufidah: 221)

According to the above discussion and arguments, we conclude that praying on a fluffy and soft praying mat is valid and permissible if a person’s forehead can be firmly fixed on the prostration place. The reason is one of the obligatory conditions of prostrations is placing seven of the prostration body parts which are the forehead, both palms, both knees, and toes of both feet firmly on the place of prostration. Furthermore, it is also conditioned to firmly fixed one’s head so that the forehead is fixed (not moved).

Thus, if the praying mat is too fluffy and soft that it makes it so that one’s forehead is not fixed on the place of prostration and it feels like it is floating, then his prostration is invalid if he prostrated on such a praying mat.

Lastly, you should know that when a person is prostrating, this is when he is closest as slave is with Allah SWT and the Prophet PBUH encourages us to make du’a during this time. The Prophet PBUH said:

“The nearest a servant comes to his Lord is when he is prostrating himself, so make supplication (in this state).”

Hence, let us all take this opportunity to supplicate as much as we can when we are prostrating to Allah SWT and not hasten to raise our heads to attend to our worldly affairs. May Allah SWT give us the correct understanding in understanding His commandments as well as guiding us to perform worship only for Him. Amin.