IRSYAD AL-FATWA SERIES 368: GIVING SALAM TO A GROUP OF MUSLIMS AND NON-MUSLIMS 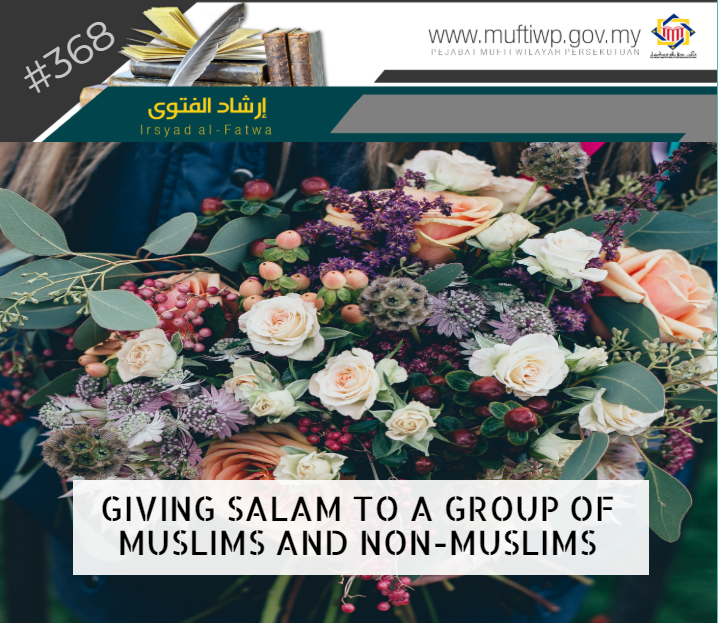 Hope for an explanation from you. Thank you.

Malaysia is a multi-cultural country. We live in a multi-racial, religion and ethnicities country which is unique to the Malaysian lifestyle. Thus, the implementation of the concept of Fiqh al-Ta’ayush along with the understanding is our greatest endeavor in building a civilization that is highly regarded in the eyes of the world.

The issues related to giving/offering salam have been discussed in our previous article:

According to the above issue, there is a hadith from the Prophet PBUH which restricts the Muslim ummah from offering salam by uttering “Assalamualaikum” to the non-Muslims. This is in accordance with a hadith narrated by Abu Hurairah RA, where the Prophet PBUH said:

“Do not initiate the saluting of Jews and Christians (when you meet them),”

Answering the above issue, the ruling of giving salam to a group of Muslims and non-Muslims is permissible. This is in line with an incident from the actions of the Prophet PBUH himself. In a hadith narrated by Usamah bin Zaid RA, he said:

The Prophet (ﷺ) rode a donkey. It had on it a saddle under which was a mattress made at Fadak (a place near Medina). Behind him he seated Usama. He was going to the street of Banu Harith al-Khazraj to inquire after the health of Sa'd b. Ubada This happened before the Battle of Badr. (He proceeded) until he passed by a mixed company of people in which were Muslims, polytheists, idol worshippers and the Jews and among them were 'Abdullah b. Ubayy and 'Abdullah b. Rawaha. When the dust raised by the hoofs of the animal spread over the company, 'Abdullah b. Ubayy covered his nose with his mantle and said: Do not scatter the dust over us (Not minding this remark), the Prophet (ﷺ) greeted them, stopped, got down from his animal, invited them to Allah, and recited to them the Qur'an.

Imam al-Nawawi said that if in a group or event consisting of Muslims and non-Muslims, then it is permissible to initiate giving salam (greeting) to them with the intention of giving salam to the Muslims. (See al-Minhaj Syarh al-Nawawi ‘ala Muslim, 12/157)

According to Imam al-Mawardi in his book (See al-Hawi al-Kabir, 14/148), two opinions are presented:

"I will ride to the Jews tomorrow. Do not give them the greeting first. If they greet you, then say, 'and on you.'"

Surely, the Prophet PBUH is the best of example in terms of qudwah and uswah and it is obligated for every individual who declares himself a Muslim to follow the Prophet PBUH’s ways. The Prophet PBUH has shown a clear way of the life of co-existence with other religions (ta’ayush). By following the actions and examples of the Prophet PBUH, it will surely build a harmonious and peaceful life between the Muslims and non-Muslims. Thus, a country as described by Allah SWT will be built. Allah SWT states in the Quran:

“A good land [have you], and a forgiving Lord."

According to the above discussion, we are inclined to state that it is prohibited to give salam to the non-Muslims. However, if it is a group consisting of non-Muslims and Muslims, then it is permissible to give salam to the group according to the action of the Prophet PBUH. At the same time, the intention should be that the salam is intended to the Muslims in the group.

Lastly, we pray that this explanation would give us understanding in living our lives according to the true shariah. Amin.