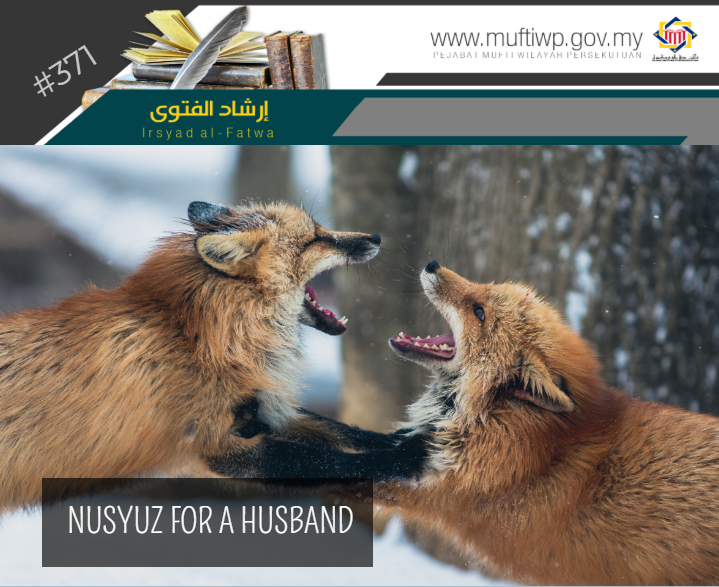 What is the ruling of a wife not obeying her husband’s command when the husband commits cruelty and does not fulfil his obligations? For example, when the husband does not give permission to leave the house to buy basic needs while at the same time the husband never buys adequate household needs. The husband would always raise his voice with his wife even when she makes simple mistakes, such as getting angry and scolding the wife when the food is not to his liking. Besides, the husband also does not give pocket money despite having good career and salary. Is it permissible for the wife to move out of their house for she has lost her patience due to her husband’s behavior?

For this article, we would like to stress out on the obligations and nusyuz of a husband. Hence, the duty of a husband is to lead his household as well as guide them according to guidelines set by syarak.

And enjoin prayer upon your family [and people] and be steadfast therein. We ask you not for provision; We provide for you, and the [best] outcome is for [those of] righteousness.

Also, among the obligations of a husband is to provide nafaqah (maintenance) and marital obligation (nafkah batin) for his wife and children. This is as stated by Dr Muhammad Zuhaili in his book that the jurists (fuqaha’) decided that it is the obligation of a husband to provide nafaqah for his wife without any differing of opinions on this matter. (See al-Mu’tamad fi al-Fiqh al-Syafi’e, 4/277)

Dr Wahbah al-Zuhaili gives a commentary of the above verse stating, a man is obligated to provide nafaqah as well as dwelling for his wife… and for man, he is the leader to ease marital affairs. (See al-Tafsir al-Wasit li Zuhaili, 1/316-317)

Besides, the saying of Allah SWT:

Mothers may breastfeed their children two complete years for whoever wishes to complete the nursing [period]. Upon the father is the mothers' provision and their clothing according to what is acceptable.

The Husband Is Provide Nafaqah For His Wife

The responsibilities of a husband in marriage are to provide nafaqah both zahir (physical) and batin (spiritual) needs as well as treating his wife well.

Hence, the responsibilities of a husband in providing nafaqah starts right after the solemnization and when the wife obeys the conditions as follows:

If these two conditions are obeyed by the wife, then it is wajib for the husband to fulfill and provide nafaqah needed by his wife. (See al-Mu’tamad fi al-Fiqh al-Syafi’e, 4/278-280)

Furthermore, in addition to wife’s nafaqah while considering husband’s capability:

I went to the Messenger of Allah (ﷺ) and asked him: What do you say (command) about our wives? He replied: Give them food what you have for yourself, and clothe them by which you clothe yourself, and do not beat them, and do not revile them.

The fuqaha’ are of the opinion that the action of nusyuz of a wife towards her husband is prohibited (haram), the same for the opposite. The reason is both are considered nusyuz if they do not fulfil their responsibilities towards their spouse. Nusyuz of a person is an action after solemnization. And it applies for both man and woman.

Dr Muhammad al-Zuhaili gives the definition of nusyuz in his book: “Nusyuz means rebellion and usually committed by a woman. A nusyuz woman is the one who is rebellious to her husband by disobeying her husband. Besides, nusyuz of a husband to his wife is by abandoning his responsibilities as well as hurting his spouse.”

And if a woman fears from her husband contempt or evasion, there is no sin upon them if they make terms of settlement between them

According to this saying of Allah SWT in the Quran, Syeikh Sha’rawi states that there is a nusyuz husband to his wife. (See Tafsir al-Sya’rawi, 5/2682)

Syeikh al-Maraghi explains on the above hadith stating, “What is meant by the above verse is a wife’s fear towards her husband becomes nusyuz upon her by blocking her needs, nafaqah, and love towards her or oppresses her by beating her and other violent acts.” (See Tafsir al-Maraghi, 5/171)

The ruling of nusyuz is not only applicable towards the wife, but rather happens towards the husband also. This is like when a husband does not provide his wife with her rights or neglect his responsibilities in term of zahir and batin like not providing nafaqah as well as treats her with cruelty.

This is as stated in al-Fiqh al-Manhaji where, “A husband who oppresses his wife and not liking her, like not giving her the right of the night, nafaqah or did violent acts upon her by words or actions, the wife should give advice to her husband and remind him of his responsibility.” (See al-Fiqh al-Manhaji, 4/109)

Syeikh Ibrahim Baijuri explains nusyuz of a husband in his book, that the nusyuz of a husband is by not fulfilling his obligatory responsibilities upon his wife which are treating her well, giving them turn of the nights if one practices polygamy, giving mahar, providing nafaqah, clothes and other basic needs… if a husband has bad character and becomes violent like beating without reason, it is permissible to submit a complaint to the judge for him to be punished by ta’zir. (See Hasyiah Syeikh Ibrahim al-Baijuri, 2251)

Actions to be Taken by a Wife Whose Husband is Nusyuz

If a husband becomes nusyuz towards his wife, then the wife should first have patience and remind him of his act by reminding him of the sayings of Allah SWT on the obligations of a husband to treat his wife well. This is in accordance with a saying of Allah SWT:

And live with them in kindness. For if you dislike them - perhaps you dislike a thing and Allah makes therein much good.

If the situation remains the same and the wife did not succeed in advising him, then she may submit a complaint to the judge or ruler of what has been done by her husband towards her. This is as stated by Dr Muhammad al-Zuhaili as well as what is mentioned in al-Fiqh al-Manhaji.

“Also, a wife should warn her husband on the punishment of his wrongdoings. If her husband changes for the better, surely this is the best thing to happen. If not, she should submit her complaint to the judge to claim her rights. This is because a judge is appointed to restore the rights of rightful individuals when they are incapable of claiming them personally… If the husband still repeats the same thing, then the wife may ask the judge to impose punishment upon her husband.”

Still, if this cannot be settled, then proxy from both parties should be sent to have some discussions on the future of their marriage. Dr Muhammad al-Zuhaili states in his book:

“If the role of a judge still unable to make both of them live in peace, then proxy from both parties should come together to settle the issue either to reconcile or separate…to impose punishments to both spouses, it is wajib to be done by a judge or ruler.”

This is in accordance with the saying of Allah SWT in the Quran:

Based on the question and explanation given, if this issue continues, we advise take the following steps:

For marital issues, it is best for one to refer to the authorities to help to resolve such problems such as the Shariah court. It is for the purpose of implementing the process of sulh written in the state’s enactment of Islamic family law. This is to establish some peaceful discussions as well as solving marital issues.

In understanding the roles and responsibilities as well as the reality of life in educating and refining the next generation, mutual understanding and tolerance between husband and wife are important in establishing blissful marriage in the form of baiti jannati.

And those who say, "Our Lord, grant us from among our wives and offspring comfort to our eyes and make us an example for the righteous."

May this explanation give benefit to the one who asks. We pray that Allah SWT bestow sakinah to the family.

Besides, you may refer to other articles as the following: