IRSYAD AL-FATWA SERIES 376: THE USAGE OF IMPLANTS MADE FROM SWINE FOR THE TREATMENT OF GLAUCOMA 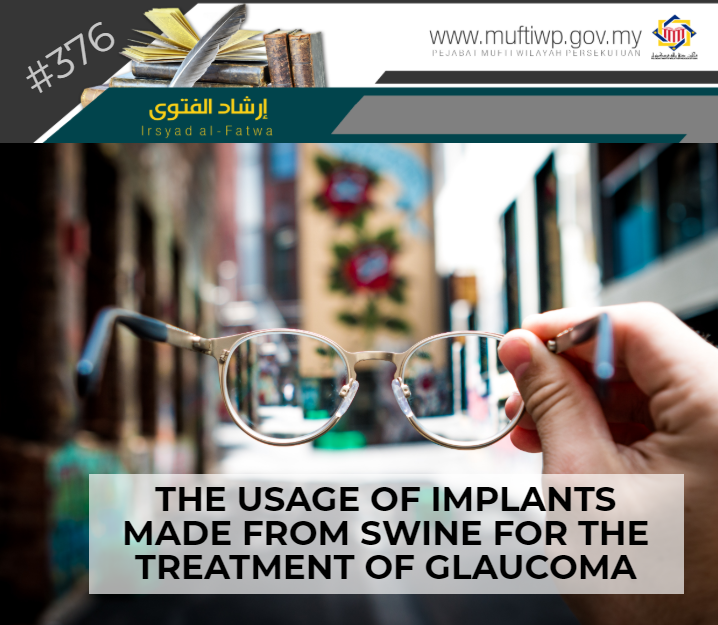 Assalamualaikum. What is the ruling of inserting implant made from swine protein into a person’s eyes for the treatment glaucoma?

Glaucoma is a type of disease that is a result of increased pressure in a person’s eye which affect vision and ultimately lead to loss of vision. While, implant refers to a type of substance, tissue, artificial implement and others inserted or embed in the body through surgery. Refer Kamus Pelajar Edisi Kedua; Kamus Dewan Edisi Keempat.

The treatment of glaucoma is to reduce the pressure on the optic nerve by surgically inserting an implant that acts as a channel for the fluid inside the eye to flow out balancing the outer and inner pressure of the eye, preventing the death of optic nerve behind the eyeball. There are numerous sizes and brands of implants used and each is used according to the suitability and advantages of each depending on the patient’s condition. Among the implants used is XEN GEL Implant which contains swine gelatine.

The Ruling of the Usage of Najis in Medical Treatment

In Islam, among the conditions of treatment is the medicine must be from the permissible and pure ingredients. If the medicine or treatment uses najis, then the original ruling of it would be haram for according to syarak, we are prohibited from benefitting from najis if there are other substances available to replace it. Allah SWT states:

“And why should you not eat of that upon which the name of Allah has been mentioned while He has explained in detail to you what He has forbidden you, excepting that to which you are compelled. And indeed, do many lead [others] astray through their [own] inclinations without knowledge. Indeed, your Lord - He is most knowing of the transgressors.”

“Allah has sent down both the disease and the cure, and He has appointed a cure for every disease, so treat yourselves medically, but use nothing unlawful.”

From Abu Hurairah RA, he said:

However, if a najis substance functions to treat an illness then its usage is permissible only when it is more effective compared to other pure substances or there are no other alternatives which are from the permissible. Imam al-Nawawi in al-Majmu’ (9/53) states the permissibility of treatment with najis: “And the dalil in our madhhab (Syafie) is hadith from Uraniyyin which is narrated in Sahihain as stated previously and the permissibility depends on the necessity they consume it for the purpose of treatment, as literally stated in the hadith. While the hadith “From among the unlawful is not a cure for you,” means that when it is not a necessity for the najis in situations when there are other pure substances that can fulfil the need (such as faster recovery time and less side effects). Thus, the najis’s status is the same as the status of other pure medicines. Thus, is the answer from both last hadiths (Abu Dawud). Al-Baihaqi said: If both hadiths are sahih, then they mean that the prohibition against medicating with intoxicants or prohibited substances are in situations when it is not a necessity, harmonizing both Uraniyyin hadiths.”

The Uraniyyin hadith meant in the above explanation is a hadith from Anas bin Malik RA:

"Some people of `Ukl or `Uraina tribe came to Medina and its climate did not suit them. So the Prophet (ﷺ) ordered them to go to the herd of (Milch) camels and to drink their milk and urine (as a medicine). So, they went as directed and after they became healthy, they killed the shepherd of the Prophet and drove away all the camels. The news reached the Prophet (ﷺ) early in the morning and he sent (men) in their pursuit and they were captured and brought at noon. He then ordered to cut their hands and feet (and it was done), and their eyes were branded with heated pieces of iron, they were put in 'Al-Harra' and when they asked for water, no water was given to them." Abu Qilaba said, "Those people committed theft and murder, became infidels after embracing Islam and fought against Allah and His Apostle."

Imam al-Nawawi set the condition that if one wishes to use camel’s urine as medicine (See al-Majmu’, 9/51), then he must be an expert in medicine and he should consult a fair Muslim medical practitioner. Imam Baghawi said, one medical practitioner is sufficient. This is in accordance with an Islamic legal maxim which states:

The facilitation of using najis as medicine is subject to the necessity of the situation or that if it is neglected then it will lead to destruction, harm and continuous suffering. Syeikh Muhammad al-Zuhaili said: “Exigent situation is when a person feared that if he does not consume the haram substance that he will die, contract a fatal disease, his suffering will increase, his recovery time is prolonged, he will be disconnected from his companion in his travels, or he will be too weak to walk or ride his animal mount and no other pure substance is found except the flesh of swine, carcass, other people’s food, then it is permissible to eat the prohibited substance.” However, the amount that is permissible to be eaten is only until it is sufficient for him to continue on living and not to eat until he is full, unless if he is isolated in a far away place and he fears that he will not be able to find food, then it is permissible for him to eat until he is full. Al-Zuhaili said: “As for medicinal purposes using najis, it is permissible if there is no other pure substance that has the same or better efficacy from the najis substance according to a sahih opinion. If there is a replacement, then the usage of najis is haram.” Refer al-Mu`tamad fi al-Fiqh al-Syafie (2/562-565)

This is in accordance with an Islamic legal maxim which states:

“What is made permissible due to exigent situation depends on the degree of the necessity,” Refer al-Asybah wa al-Nazha’ir (pg. 172) by Imam al-Suyuti.

A person who is medicating using najis because of a necessity, then it is forgiven for him to pray in a situation where he is wearing or bearing the substance because of the necessity and his prayer is valid. Imam al-Nawawi in Minhaj al-Tolibin (pg. 31) said: “If his bones are connected with a najis for there is no pure substance, then it is forgiven, unless if there is a pure substance then wajib for him to remove it if it does not harm him.”

The above statement is explained by Imam al-Khatib al-Syirbini as follows: “[If a person’s bones are connected] for example because it is broken and it is reconnected [using najis because there is no pure substance] which is suitable to be connected to, or there is pure substance but khibrah (experts in the medical field) state that the substance is unbeneficial and it has to be connected with a najis substance [then there is a facilitation] in the case, then the prayer is valid because of the exigent situation. (Imam al-Nawawi) said in al-Raudah just like the original ruling, it is not wajib for it to be disconnected even if there is pure substance to replace it. The literal meaning of the statement states that it is not wajib to disconnect it if there is concern that it may cause harm to the person and this is how it should be. However, some contemporary scholars state: If there is fear that it may cause harm if it is disconnected, however, if not, then it is wajib to be disconnected. If the khibrah state: Indeed, the flesh of humans will not heal as fast unless using the bones of a dog, then the substance should be chosen, just like what has been stated by al-Isnawi for it is a facilitation. This is analogically deduced (qias) with the case of tayammum in the issue of prolonging the time of recovery (if water is used). The apparent opinion states that there is no difference between the bones of an honoured man and others (such as a harbi disbeliever) and this is the wise opinion, although according to al-Azraie bones that originates from dishonoured life such as a harbi disbeliever or a person who renounced Islam is something undesirable. [If not] which means if it connected when other pure and good substance is available (which is also suitable to be connected with) and there is no necessity for it to be connected (with najis), then it is haram to be connected (with najis) and considered as a transgression, [wajib] for him [to disconnect it] and he can be forced to do so [by the authority] [if there is no fear of harm] for matters that permits tayammum.” Refer Mughni al-Muhtaj (1/405)

Imam Syamsuddin al-Ramli said: “If there is concern that the matter (apparent harm) such as disability or prolonged recovery (where it is insufficient for just pain and the wound has healed, when it is connected there is other pure substance), then it is not wajib to be disconnected due to the facilitation, it is even haram as stated in the book al-Anwar and the prayer is valid and he does not need to repeat it.” Refer Nihayah al-Muhtaj (2/24); and Tuhfah al-Muhtaj (2/127) by Imam Ibn Hajar al-Haitami.

The facilitation regarding the case for bones is applicable for cases of medicine consumption and surgical sutures as stated by Imam al-Nawawi in Raudah al-Tolibin (1/276): “And medicating on wound parts with najis medicine and stitches with najis sutures (its ruling) is the same with connecting with najis bones, then it wajib to extract it the same when it is wajib to disconnect the bones (which is najis), the same when a part of the body is wounded and there is bleeding (which need stitches).”

According to the above explanation and facts, glaucoma is a dangerous disease for it may lead to complete vision loss. Islam commanded its followers to protect and maintain their health and prohibit from damaging their bodies and others. All of these are placed as one of the main purposes of syarak rulings which is hifz al-nafs which means protection of life and body. Thus, treating glaucoma with medicine or surgery is one of the methods of realizing the purpose of syarak of protecting one’s life.

Implant surgery inside a person’s eye to balance the fluid flow on the surface of the eye has several specific approaches. Not all patients are suitable with a certain product of implant and each patient is suitable with certain implant. The usage of implant which contains gelatine from swine has its own specific medicinal advantage which at this time has no other available replacement. According to the above explanation, porcine gelatine has a great medicinal quality compared to bovine gelatine (from cow) which is susceptible to the infection of bovine spongiform encephalopathy (BSE or commonly known as mad cow disease) which could lead to genetic mutations in the new host.

Thus, the usage of implant made from porcine gelatine for the treatment of glaucoma where it is not possible to use other pure substance which functions the same way is permissible and the wearer is considered as debilitated and his prayer is valid and it is unnecessary for him to repeat his prayer. This is analogically deduced with the usage of bones, medicine and sutures from najis in treatment as discussed by scholars.

Hopefully, this answer is a good explanation for us all. Wallahua’lam.