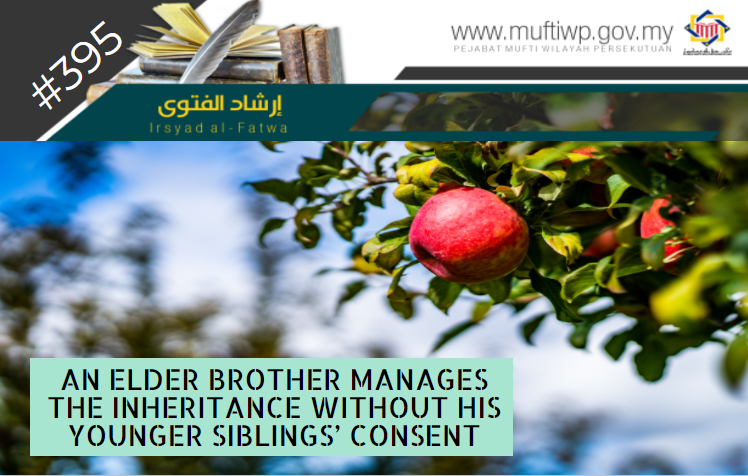 Assalamualaikum SS Datuk Mufti. My biological brother has an orchard of 3 acres. He also manages my sister’s and mine of 3 acres without our consent. However, we cannot object to our brother’s decision. My brother asked my sister and me to pay for the cost of expenses which is RM40,000 per person. My brother already took some of the inheritance of our late mother to pay for this and the amount is not sufficient. Does such a claim is considered a debt that needed to be settled in Islam by both of us (my sister and I)? Hope for an explanation. Thank you.

Islam highly detests the action of oppression and taking others’ rights without the consent and agreement of its owner. Even though the property or stuff is owned by our siblings or those who have blood relationships with us. In a hadith narrated by Abdullah bin al-Sa’ib from his grandfather, that the prophet PBUH said:

He who appropriated the right of a Muslim by (swearing a false) oath, Allah would make Hell-fire necessary for him and would declare Paradise forbidden for him. A person said to him: Messenger of Allah, even if it is something insignificant? He (the Holy Prophet) replied: (Yes) even if it is the twig of the arak tree.

Answering the above question, managing an orchard without consent and agreement from the owner is vain and not valid because there is no sighah qabul in the contract. While taking payment from the inheritance division without the consent of its owner is a transgression and sinful act. Hence, the claim on payment of the cost is not considered as a debt needed to be settled by the orchard owner. In a hadith narrated by Sa’id ibn Zaid, the Prophet PBUH said:

If anyone brings barren land into cultivation, it belongs to him, and the unjust vein has no right.

Imam al-Munawi in commenting on this hadith states a barren land means land with no owner. (See Faidh al-Qadir, 6/39)

In conclusion, we state that each contract shall be agreed upon and acquire consent from both parties in a transaction. If the condition is not fulfilled, the contract is considered invalid. When a contract is invalid, every action starting from that is also invalid. The same goes for the prohibition of taking others’ rights unlawfully has been clearly explained by threat through the saying of Allah SWT as follows:

And whoever does that in aggression and injustice - then We will drive him into a Fire. And that, for Allah, is [always] easy.

Oppressing others by taking their rights unlawfully is something wajib to be avoided by all levels of society in shaping a more harmonious and peaceful society.

May the given explanation open our mind and understanding in living life with shari’a blessed by Allah SWT. Ameen.