IRSYAD AL-FATWA SERIES 457: IS IT WAJIB TO FOLLOW THE DIRECTIVE OF THE GOVERNMENT TO NOT GO TO THE MOSQUE? 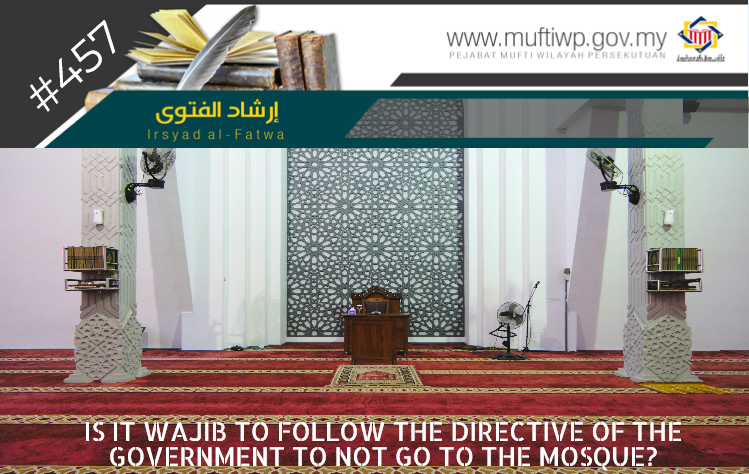 Assalamualaikum ustaz, recently, there is an order to cease and postpone all mosque’s activities which also include the congregational and Friday prayer as a precautionary step to stop the spread of the COVID-19. My question is, is it obligatory for us to follow this order?

Obeying the ruler or government is one of the commandments in syarak. Numerous evidences from the Quran and Sunnah clearly state this commandment. Among them is the statement of Allah SWT:

“O you who have believed, obey Allah and obey the Messenger and those in authority among you.”

Some tafsir scholars in their explanation on the above verse state that obedience to ulil amri is bound based on their obedience to Allah SWT and His Messenger PBUH. Thus, the obedience to the ruler is only for makruf matters. This is in line with a hadith narrated by Ibn Umar R.Anhuma, he said the prophet PBUH said:

Hence, any orders issued by the ruler for anything that is makruf, good, beneficial for the citizens, regardless of whether we like it or not, if it is not a form of transgression then it is wajib for us to comply with it. This is in accordance with the famous Islamic legal maxim:

Syeikh Syihabuddin al-Qasthallani in his commentary on the above hadith of Ibn Umar said: “Obedience towards the orders issued by them (the authorities/government/ruler) is wajib and this includes Muslim rulers during and after the time of the Prophet PBUH as long as the order is not a transgression or sin.” Refer Irsyad al-Sari li Syarh al-Bukhari, Al-Qasthallani (5/119).

Coming back to the question presented, we would like to state that the order issued by the government to postpone the congregational and Friday prayers is not a form of transgression. It is an order built on the basis of protecting the maslahah of the people, protecting them from harm. This order is issued after discussions with the bodies of authorities and experts in their respective fields. This is in accordance with the statement of Allah SWT:

Especially when there is a facilitation given by syarak to not attend the mosques for those who has an excuse such as fear and sickness. This is according to a hadith by Ibn Abbas R.Anhuma, he said the Prophet PBUH said:

According to the above hadith, basically, a person is commanded to attend the congregational prayer if he hears the adhan. However, if he has an excuse then he is exempted from attending and answering the call. While in another narration the Companions asked the Prophet PBUH as to what are the excuses? The Prophet PBUH replied:

It is clear from the above hadith that the feeling of fear or illness is included under the category of excuse that make it permissible for a person to not attend the mosque for the congregational prayer.

Furthermore, the closing of mosques is one of the efforts to stop the spread of contagious diseases and Islam emphasizes on preventive measures as stated by Allah SWT:

To conclude, we end the discussion with the following points:

In a hadith narrated by Ibn Abbas R.Anhuma, he said the Prophet PBUH said:

“And the least of sadaqa is the removal of harmful object from the road,”

Thus, any effort to prevent any harm or sickness of contagious diseases from the Muslim ummah is included as sadaqa.

Thus, the order issued is an effort to prevent a greater harm although it has to set aside certain maslahah.

Lastly, we pray to Allah SWT to bless us with the correct understanding in religion. Amin.