IRSYAD AL-FATWA SERIES 477: IS IT PERMISSIBLE TO USE MOSQUES’ FUNDS TO HELP THE MUSLIM UMMAH WHO ARE AFFECTED BY THE COVID-19 PANDEMIC? 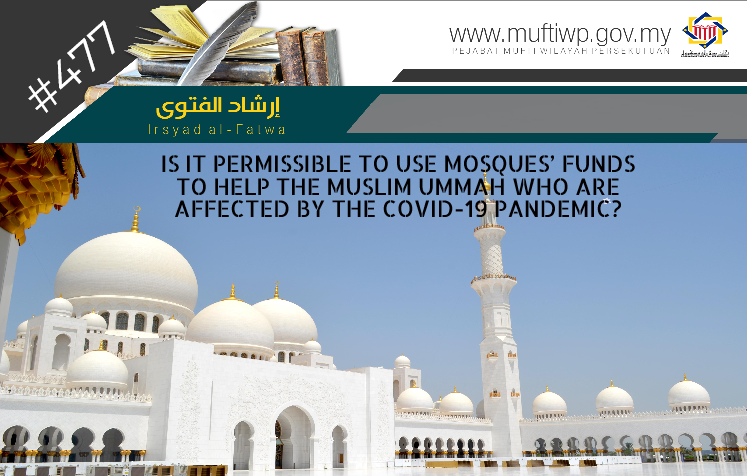 Assalamualaikum ustaz. During the current movement control order (MCO), numerous people are affected or lose their source of income and face other problems. My question is, is it permissible for the mosque’s management to use the funds from donations or other sources to help the kariah (people who live at that area) and other people who are affected by this pandemic?

Generally, Islam encourages any effort to help and ease each other’s burden. This is clearly stated by Allah SWT in the Quran:

“And cooperate in righteousness and piety,”

The word التعاون is known to mean cooperate in terms of cooperation from every party to help one another. At the same time, Islam places a condition that the cooperation must be for matters of righteousness and piety.

Righteousness and piety are matters that is beloved by Allah SWT and the syarak commanded the believers to perform it. Among the righteous maters encouraged by syarak is helping the people who are in need. This is stated in a hadith narrated by Abu Hurairah RA, where the Prophet PBUH said:

Thus, this is the unity of Muslims, if he sees his brother in Islam is in need, he would also be affected by it. This is stated in a hadith narrated by Nu’man bin Bashir RA, he said, the Prophet PBUH said:

The similitude of believers in regard to mutual love, affection, fellow-feeling is that of one body; when any limb of it aches, the whole body aches, because of sleeplessness and fever.

Coming back to the above question presented, we would like to sate that donations given to the mosque through any channels such as the mosque’s fund or online are in truth categorized as tabarru’ as stated by jurists.

The meaning of tabarru’ is: “An effort of a mukallaf who gives his property or benefit others now or in the future without any returns with the intention of charity or doing good.” Refer Al-Mausu’ah Al-Fiqhiyyah Al-Kuwaitiyyah (10/65).

Thus, it can be understood from the above meaning that a person who donates does not hope for any return in this world specifically for himself except that he hopes for the rewards from Allah SWT. At the same time, he donates with the intention of benefitting others whether it is right away or in the future.

Hence, the mosque’s management in this case acts as a trustee in managing and channelling the money ensuring that it is used for the benefit of the Muslim ummah in the area specifically and the whole ummah as a whole.

In the issue of the management of the mosque’s fund, we have explained it in detail in Bayan Linnas Series 218: Opinion Regarding the Issue of Managing Mosque’s Fund and it can be accessed through the link https://bit.ly/2WJuxas. On another hand, for the issue of utilizing the mosque’s funding in helping those who are affected throughout the MCO, we would like to share the words of Syeikh Zakariyya al-Ansari as the following:

If a person gives several dirham to him and said: “buy for yourself a turban with this money or take this turban to the bathroom,” or other similar statements, then it is a commandment for him to do so in order to fulfil the purpose of the individual who contributed (the money). Refer Asna al-Mathalib, Zakariya Al-Ansari (2/479)

If a person (who contribute the money) with the intention to (the person who was given the money) to cover his head with turban and clean it, by bringing to the bathroom and clean it, according to what he sees in terms of the person head is exposed (uncovered) and messy as well as there is dirt on the body of the person (then it is a commandment for the recipient to do as he is told). If not, which means if he did not specify his intentions (the intention of the donation is general), such as if he said (use the money) in a wide form in accordance with the custom, thus, the money is not set to be used for the matter (which has been stated). The recipient actually owns the money and it is permissible for him to use it as he sees fit. Refer Asna al-Mathalib, Zakariya Al-Ansari (2/480)

To conclude, we end our discussion with the following points:

The following we share the statement issued by the Federal Territories Committee of Fatwa Council regarding this issue:

If not, which means if he did not specify his intentions (the intention of the donation is general), such as if he said (use the money) in a wide form in accordance with the custom, thus, the money is not set to be used for the matter (which has been stated). The recipient actually owns the money and it is permissible for him to use it as he sees fit. Refer Asna al-Mathalib, Zakariya Al-Ansari (2/480).

May Allah SWT rewards the contributors and donators of the mosque/surau funds throughout the Federal territories especially and the country in general. Hopefully, this great effort would somehow alleviate the burden of the kariah members of the mosque/surau. At the same time, it becomes a good deed of the Muslims and that Allah SWT would replace it by removing the trial of COVID-19 pandemic that is affecting our country today.

Lastly, we pray to Allah SWT to give us the correct understanding in practising this religion. Amin.