IRSYAD AL-FATWA SERIES 481: THE METHODOLOGY FOR PURIFICATION AND PRAYER FOR COVID-19 PERSONNEL WHO HAS TO WEAR THE PPE FOR 12 HOURS 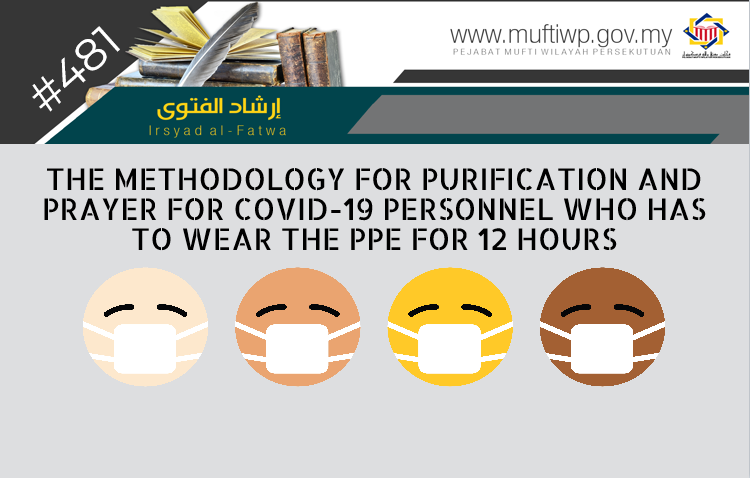 How should a COVID-19 medical personnel purify himself and pray if he is forced to wear the Personal Protection Equipment (PPE) for 12 hours straight from 9 a.m. to 9 p.m.?

The Ruling of Tayammum on Top of the PPE

Performing tayammum on top of the PPE is permissible according to some Syafi’iyyah scholars, analogically deducing it with the ruling of tayammum on jabirah (wound bandage). The final opinion is a person who can’t purify himself with water or dirt, then he is in a faqid al-tohurain (in the absence of two means of purification) situation. It is still wajib for him to perform the five obligatory prayers and it should be performed without ablution and tayammum for he is in a desperate situation and his prayer is valid but should be qadha’ (replaced).

“If the bandage is on the place (body part) of tayammum, then it is not necessary to wipe it with dirt according to the asah opinion (stronger opinion).”

“As for performing tayammum, washing the uninjured body parts, and wiping the bandage with water, then in this case there are two ways (two ways according to scholars); the asah opinion between the two, the famous opinion decided by the majority of scholars, there are two qawl (Imam al-Syafie); the asah qawl according to the majority is that it is wajib. This is stated in al-Umm, al-Buwaiti and (al-Hawi) al-Kabir. The second qawl states that it is not wajib. This is stated in the old opinion (al-qodim), stated in al-Mukhtasar and evaluated as sahih by Syeikh Abu Jamid, al-Jurjani and al-Ruyani in al-Hilyah. Al-Abdari said: This is the opinion held by Imam Ahmad and other scholars. While the second way is narrated by Syafi’iyyah scholars from Khurasan, which is evaluated as sahih by al-Mutawalli, where if there is ilat that cannot be washed underneath the bandage when it is exposed, then tayammum is wajib, the same as a wound. However, if it can be washed when exposed, then tayammum is not wajib, the same as the ruling of a person wearing khuf. The author (Imam al-Syirazi) stated evidences for both qawl, thus, the opinion of the madhhab is it is wajib.

When we obligate tayammum, if the bandage covering the body part of tayammum, then there are two opinions; as narrated by Syeikh Abu Muhammad and his son, Imam al-Haramain, al-Ghazali and other scholars; the first opinion states that it is wajib to wipe dirt on the bandage, just like it is wajib to be washed with water. While the sahih opinion according to the Ashab and decided by al-Mawardi, al-Baghawi and others, it is not wajib to be wiped with dirt but other parts are wiped. The reason is dirt has a weak attribute thus, it does not affect (when wiped) on ha’il (matter that impede it from reaching the skin), different with washing with water. Indeed, there is an effect when water is wiped on the material that covers, the same as the case of khuf. According to this, then (the ruling of tayammum) is sunnah, and this is stated by al-Darimi and other scholars to escape the khilaf.”

“If the usage of water is prevented with coverage on parts of face, hands, parts of the two body parts, then a third wiping of tayammum is added. It is wajib to wipe the ilat area with dirt completely if it uncovered. If the ilat includes all body parts for ablution or tayammum and (at the same time) the bandage covers all the body parts for tayammum, then it (the obligation) of wiping (with water) is abrogated by the tayammum, the same with the case of washing as stated in al-Kifayah: “Indeed, dirt is weak and does not bring any effect when wiped on the bandage (of which covers the body part). Thus, a person should pray just like a faqid al-tohurain and repeat his prayer.” Some scholars obligate the wiping in this case, saying: If (the ilat) includes all body parts for ablution, it is (still) wajib for ablution by way of wiping. Some of them obligate (only) tayammum on the covering/bandage, while the parts which are covered with the purpose of support but are still healthy, wajib to be wiped (with water) and for tayammum, as it is already known. Some scholars state that tayammum is just sunnah here and not wajib.”

This is the opinion held by Imam al-Nawawi and Imam al-Muzani in the case of faqid al-tohurain. This is also the opinion of madhhab Imam Ahmad bin Hanbal. This is different from what is stated in qawl jadid, as stated by Imam al-Syafie:

“al-Syafie prefers a person to replace it (his prayer) when he is able to perform ablution of tayammum, for indeed, he prayed with neither ablution nor tayammum. Indeed, only Allah Taala made tayammum as replacement to water. When a person does not have water and dirt, then when he is able, he should replace it. This is what I have decided after performing istikharah to Allah about it.”

Some of the references regarding this final opinion we have already stated in the above discussion.

Regarding the opinion which states that it is unnecessary to repeat the prayer, Imam al-Nawawi stated this after discussing the following hadith. From Aisyah R. Anha, Ummul Mukminin:

That she borrowed a necklace from Asma' and it was lost. Allah's Messenger (ﷺ) sent some of his companions to look for it. During their journey the time of prayer was due and they prayed without ablution. When they returned to the Prophet (ﷺ) they complained about it. So the Divine Verse of Tayammum was revealed. Usaid bin Hudair said (to `Aisha), "May Allah reward you handsomely. By Allah, whenever you have a difficulty, Allah took you out of it and brought with it, a Blessing for the Muslims."

“In the hadith there is evidence that it is the responsibility of a person who has neither water nor dirt to still pray in this situation. This is an issue where the salaf and khalaf have differing opinions on. Even in madhhab al-Syafie itself, there are four qawls.

“And if I order you to do something, then do of it as much as you can.”

Regarding the obligation to qadha’ (replace), indeed it is an issue that seldom happens thus, the ruling is the same with the case of a person who forgets to wash one of his taharah body parts (such as ablution and tayammum) and performed his prayer this way. Then, surely, it is wajib for him to replace his prayer.

Imam al-Nawawi further said: “Indeed, prayer is a lot and repeated continuously, then it would burden for the women to replace it, different with fast, of which are obligated only once a year, and probably a woman would menstruate for a day or two. Our ashab (Syafi’iyyah scholars) said for every prayer during the time of menstruation is abrogated and not replaced except for two rakaat (sunnah prayer) tawaf prayer… and indeed, the qadha’ obligation must be with a new commandment.”

Usul scholars from among the Syafi’iyyah explained the method stated by Imam al-Nawawi. Imam al-Isnawi said:

“The simple method in al-Mahsul, al-Hasil and al-Tahsil (by al-Razi) and others state the ruling of qadha’ is only applicable when there is a new commandment. When the Shariah Creator commanded a worship and does not command qadha’ for it, then a person (mukallaf) performed the worship, thus it is ruled as has been performed completely. This accompanied with the fact that qadha’ is not wajib at the time for there are no new matter which obligates it, which means a new commandment.”

In the context of medical personnel wearing the PPE during the COVID-19 pandemic which is happening and it is unknown when this pandemic will stop, for it may take months – na‘udzubillah min dzalik – it is probable to say that this debilitation is not something that seldom happen and would need for a facilitation (rukhsah) which fulfils the principles of the maxims al-masyaqqah tajlib al-taysir (difficulty brings about ease), al-dhorurat tubih al-mahzurat (exigent situations make the impermissible permissible) dan al-dhorurat tuqaddar bi qodariha (exigent situations make the impermissible permissible according to the degree of the situation). Thus, when there is a continuous difficulty to replace prayers, then it is permissible for medical personnel who has to wear the PPE for a prolonged period of time to pray in that situation and it is unnecessary to qadha’ the prayers.

Is It Permissible to Perform Jamak Prayers When We Only Perform the Tayammum Once?

If we hold onto the opinion which obligates tayammum for COVID-19 medical personnel wearing PPE, then it is also wajib to perform the tayammum for every obligatory prayer. Syeikh Muhammad al-Zuhaili stated in al-Mu`tamad fi al-Fiqh al-Syafie (1/106):

“A person should perform tayammum for every prayer even if he does not experience hadas (impure).”

Thus, it is impermissible to perform jamak for two prayers with one tayammum, regardless whether it is performed at the same time or separately, qadha’ or on time.”

Furthermore, for a person in a faqid al-tohurain situation, the only permissible jamak prayer for him is jamak ta’khir and it is impermissible to perform jamak taqdim for there is a possibility that his debilitation is removed in during the second prayer time, the same with the case of a woman confused about her menstruation (mutahayyirah case). Refer Hasyiah al-Jamal (1/610) by Syeikh Sulaiman al-Jamal. However, if the illah of the permissibility to perform jamak prayer for COVID-19 medical personnel due to illness, or other diseases according to syarak, it falls under the situation of fear of something which threatens one of the Maqasid Shariah, thus, it is not a problem to either perform jamak taqdim or ta’khir, as we have discussed previously in Irsyad al-Fatwa Series 455: The Ruling of COVID-19 Medical Personnel Performing Jamak Prayers. Syeikh al-Syirwani in Hasyiah of Tuhafatul Muhtaj (1/30) by Imam Ibn Hajar al-Haitami, cited from Imam Ibn Qasim al-Abbadi who said:

“Indeed, when coincides with obligatory in its time with; an act to save a prophet, or someone other than a prophet from harm, then it is decided that the act saving someone is prioritized compared to praying in its time.”

“Hanabilah scholars state that if a person performs tayammum, he can perform prayer of which at the time he performed the tayammum, for prayer of which the time has passed as well as jamak for two prayers. He can also perform as many sunnah worship he wishes for as long as the time for the prayer hasn’t ended. When a new time of prayer begins, then his tayammum is invalidated and he should renew his tayammum. They stated that tayammum is the same as ablution of a woman experiencing istihadhah whose ablution is invalidated when the new prayer time begins.”

Thus, considering that the COVID-19 medical personnel are in an exigent situation, then there are two choices that can be made:

According to the above facts and statements, we are inclined to state that the method for purification and prayer for COVID-19 medical personnel who are forced to wear the PPE for 12 hours straight are as the following:

Hopefully, this explanation would give understanding to the questioner. May Allah SWT help and save us from this dangerous pandemic. Amin.

[1] Tayammum is the safest method compared to masah (wiping of water) according to the advice from the Ministry of Health Malaysia (MOH).

[2] Considering the opinion in madhhab Hanbali.