IRSYAD AL-FATWA SERIES 484: THE RULING ON PERFORMING JANAZAH PRAYER IN ABSENTIA FOR PEOPLE WHO PASSED AWAY DUE TO THE COVID-19 OR OTHERS DURING THE MOVEMENT CONTROL ORDER (MCO) 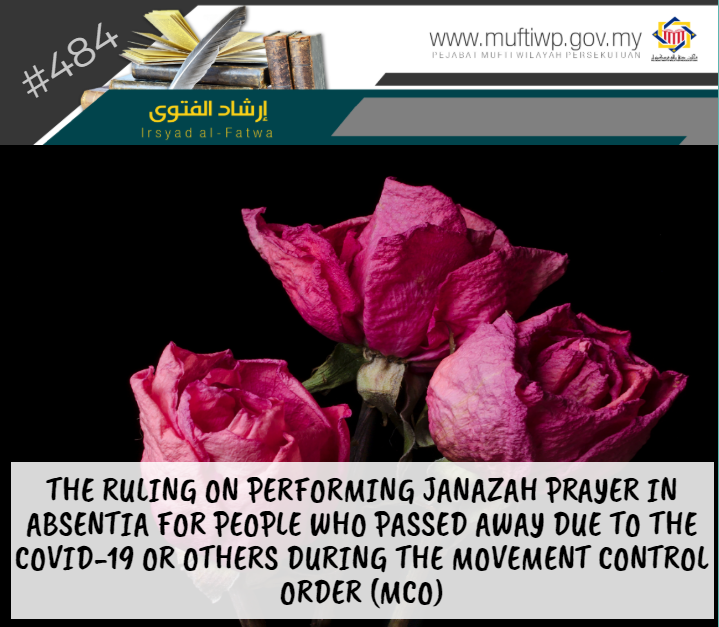 Is it permissible for me to perform the janazah prayer in absentia for the Muslims who passed away due to the COVID-19 or others during the Movement Control Order?

The janazah prayer (prayer for the deceased) is one of the fardhu kifayah on every Muslim towards his brother who passed away. There are numerous evidences that state the sanctioning of the janazah prayer. Among them is a hadith narrated by Ibn Abbas R.Anhuma, where he said the Prophet PBUH said:

"If a Muslim man dies and a group of forty people, who do not associate any one with Allah, pray for him, Allah will accept their intercession for him (by way of their du’a for him).”

“Allah's Messenger (ﷺ) informed (the people) about the death of An-Najashi on the very day he died. He went towards the Musalla (praying place) and the people stood behind him in rows. He said four Takbirs (i.e. offered the Funeral prayer).”

First: Some scholars are of the opinion that the hadith is specific for only Najasyi. The reason is Najasyi passes away in a time when there are no other Muslims living in his region to pray for him. Thus, the Messenger PBUH took it upon himself to ask the Muslim ummah during his time to fulfil the fardhu kifayah commandment.

Imam Ibn Battal who is among the al-Malikiyyah Kibar scholars said that performing the janazah prayer in absentia is specific for only Najasyi. He supported his opinion saying:

“The evidence for this is the Prophet PBUH did not perform janazah prayer in absentia for any muhajirin or ansar who passed away throughout the country preceding this incident. And this is the practice of the Muslim ummah after the Prophet PBUH. They did not perform the janazah prayer in absentia. The reason is janazah prayer is among the fardhu kifayah which is performed by the doer in the same region/state of which the deceased passed away. Refer Syarah Sahih Al-Bukhari, Ibn Battal (3/243)

Imam al-Nawawi a Kibar scholar of al-Syafi’iyyah holds the opinion that it is permissible to perform the janazah prayer in absentia. He based his opinion with the above hadith saying:

And our madhhab (al-Syafi’iyyah) states the permissibility of performing the janazah prayer when the deceased is not in the same state. Regardless of whether the deceased is in the direction of the qibla or others. However, the people who are performing the prayer must face the qibla. And there is no difference between the distance between the two countries whether it is near or far, there is no khilaf (difference of opinions among scholars) for all these matters for us. Refer Al-Majmu’ Syarah Al-Muhazzab (5/253).

Thus, we agree with the opinion of madhhab Imam al-Syafi’e in this issue which ruled it permissible to perform the janazah prayer in absentia. The next question which arises is, since we are under the MCO, surely, we as one of the people in society cannot go to the mosque to perform the congregational janazah prayer throughout this duration if anyone dies due to the COVID-19 or other diseases or causes.

In answering this question, the following we share the opinion of Syeikh Zainuddin al-Malibari who said:

If there is a debilitation for him that restricts him from attending it (the janazah prayer) because he is isolated/restricted or sick, then this is permissible (to perform the janazah prayer in absentia) according to the opinion (presented by ashab al-wujuh). Refer Fath Al-Mu’in, Zainuddin Al-Malibari (225).

Thus, this opinion shows that a person who is unable to attend the congregational janazah prayer due to a debilitation, then it is permissible for him to perform the janazah prayer in absentia.

To conclude, after analysing the above evidences and arguments, we would end our statement with the following points:

A black man or a black woman used to sweep the mosque and he or she died. The Prophet (ﷺ) asked about her (or him). He was told that she (or he) had died. He said, "Why did you not inform me? Show me his grave (or her grave)." So, he went to her (his) grave and offered her (his) funeral prayer."

This hadith clearly shows that it is permissible for a person who did not get the chance to perform the janazah prayer to perform it after the deceased has already been buried at the deceased’s grave. We have discussed this issue at length in our previous article: https://muftiwp.gov.my/en/artikel/al-kafi-li-al-fatawi/3225-al-kafi-1165-adakah-sah-solat-jenazah-di-atas-kubur

Whereas, regarding the duration of which it is permissible to perform the janazah prayer at the grave, Imam al-Nawawi has stated six opinions in this issue: