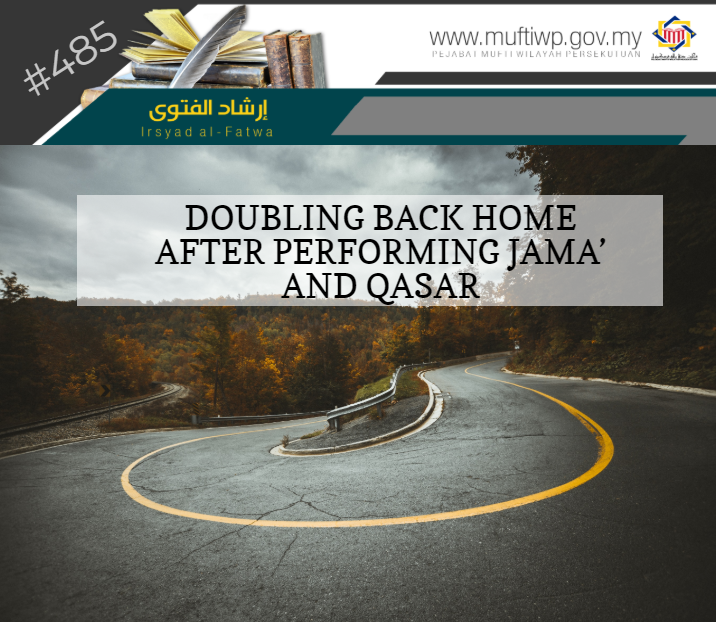 I travel to Kuala Lumpur from my house at Malacca which distance between them are more than two marhalah. Before I reach Pedas toll, I had the chance to pray jama’ taqdim of Zuhr and Asr prayer at the nearest mosque, but then I realize that I left behind some of my important stuffs in Malacca. The distance between the Pedas toll and my home does not reach 2 marhalah. I then went back home to retrieve my belongings. Does my previous jama’ and qasar prayer invalidated because I return home and do I have to repeat my prayer?

One of the requisites of musafir prayer which comprises of qasar and jama’ one’s prayer is it must be done during the travel period. The scholars said that musafir status will not take place unless one goes out of his state or muqim boundary like his village, city or suburbs. Their evidence is the saying of Allah SWT:

And when you travel throughout the land, there is no blame upon you for shortening the prayer,

“So, this verse relates the ruling of qasar with al-dorb ‘ala al-ardh (travelling). Hence, for a resident of a city, he may qasar (shorten) his prayer when he is separated from the building of that city. If the garden gate is connected with the city gate, then being separated with the city building is enough to permit qasar because those gardens are not part of the city, and if there are two villages next to each other, then when one who leaves his village (enters next village) it is already permitted for him to perform qasar”.

The example is a hadith narrated by Anas bin Malik RA:

I offered four rak`at of Zuhr prayer with the Prophet (p.b.u.h) at Medina and two rak`at at Dhul-Hulaifa. (i.e. shortened the `Asr prayer).

As a note, the distance between Nabawi Masjid and Dzul Hulaifah is approximately 7 kilometre.

Hence, when one goes across his muqim boundary, to travel to certain destination, for 2 marhalah or more (approximately 82 kilometres) from his home, he is permitted to qasar and jama’ his prayer once he goes out of his boundary.

The Intention to Return Annuls Travel

At the same time, one who intends to return to his home, or to enter the boundary of his muqim again is not considered as a traveller and it is prohibited to qasar and jama’ his prayer.

He said (Imam al-Shafi’e) in al-Imla’ and in his qawl qadim, it is stated: “When one travels and passes the buildings then he prays, then his nose bleeds, he then returns to the compound of the building to wash his nose, it is impermissible for him at that time to pray by qasar and he should perform it, completing the rakaah (which is four rakaats) because he performs it inside the building.”

While in qawl jadid: “His prayer is invalidated (because of the nosebleed), so, if he wants to perform again his prayer, he should do it by complete rakaah (four rakaats) while being inside the building. However, when he gets out of the compound, he can perform his prayer by qasar.”

If he then resides in a place outside of the city, to wait for a kafilah; if he intends to wait for less than four days for them to gather, if he has the time, surely he will continue his travel, then he is permitted to qasar his prayer, because he already decided himself to travel (to a place more than 2 marhalah). However, if he does not intend to continue his travel unless the kafilah gathers together with him, if not, he will cancel his travel, then he can no longer qasar his prayer because he has decided not to travel.”

[When] one gets separated by the place which becomes a requisite for him to pass, then [he turns back] while the distance is less than distance for travellers, due to some necessity, like purifying, or he intends, when he is resting at a place not to follow anyone, to go back to his starting point, even if the area is not suited to be a place of residence. If he wants to turn back to his watan, then starting from his action to return, or his intention to do so, then his status automatically changes to a residence (muqim). Hence, he cannot take the ruling of rukhsah anymore during his residence, also when he is on his journey back, unless when he goes back to travel from his watan.”

“And when a person who has performed jama’ taqdim becomes a muqim between these two prayers, then his jama’ is invalidated. But if the muqim takes place during his second prayer or after completing it, then it does not invalidate his jama’ according to the asoh opinion.”

“[but if muqim takes place during the second prayer or after finishing it] if he becomes muqim [then this does not invalidate his jama’, according to the asoh opinion] because the prayer is mixed between uzur (debilitation) and a complete prayer before the uzur is lifted.”

Based on the above facts and explanation, we are inclined to state that jama’ and qasar done by the questioner is valid, and need not be performed again when he is already mufaraqah bunyan al-balad, which is when he gets separated from his boundary.

Hopefully, this explanation gives understanding to the questioner. We pray to Allah SWT to bless us with hidayah and inayah to lead our life so that we become a righteous Muslim. Amin.