IRSYAD AL-FATWA SERIES 489: ARGUMENTS STATING THAT THE ZOHOR PRAYER IS PERFORMED TO REPLACE THE FRIDAY PRAYER WHEN THERE IS A DEBILITATION 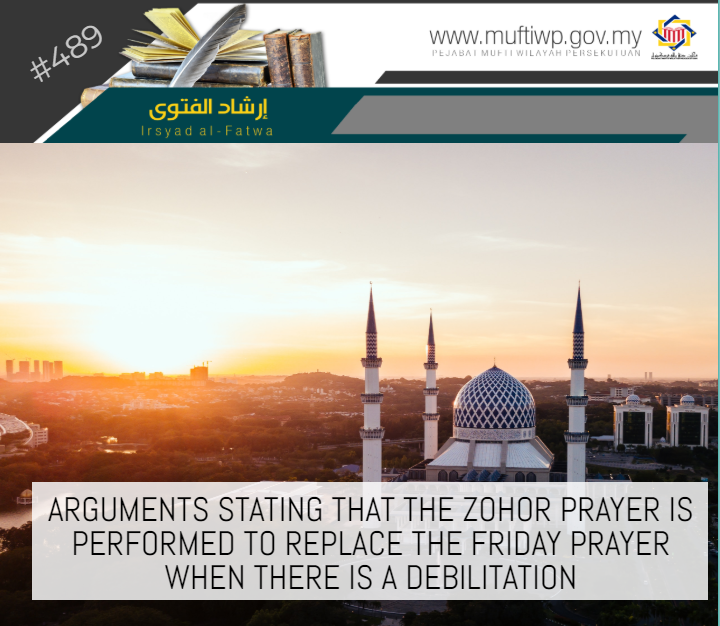 Assalamualaikum ustaz, as we all know during the Movement Control Order, we have been restricted against going to the mosque to perform the Friday prayer for several weeks now. My question is what are the arguments and evidences used stating that the Friday can be replaced with Zohor prayer at home?

The Friday prayer is one of the wajib commandments of syarak for every mukallaf man as well as one of the eminences of Islam. There are numerous syarak evidences which state the sanctioning of the Friday prayer and the grave warnings for those who purposely leave it. Allah SWT states:

Imam al-Hafiz Ibn Katsir said: “(The believers are those) who are not distracted with worldly matters and its wealth, adornments, as well as the joys of trade from remembering Allah who is their Creator and Provider. And they are those who know that whatever that is by His side is better and more beneficial than what is by their sides. The reason is what is by their side is momentary and will be destroyed while what is by His side is eternal. (Hence, they would surely) prioritize obedience towards Him, His commandments and what He loves compared to their desires and likes.” Refer Tafsir Al-Quran Al-Azhim, Ibn Katsir (6/68)

However, there is facilitation regarding the commandment of performing the congregational Friday prayer when there is an exigent need or debilitation that prevents a person from performing it. This is in accordance with a hadith narrated by Ibn Abbas R.Anhuma, where he said, the Prophet PBUH said:

According to the above hadith, basically a person is commanded to perform the congregational prayer if he hears the call of the adhan. However, if he has an excuse then he is exempted from answering the call. In another narration, the Companions asked the Prophet PBUH as to what constitutes as the excuse? The Prophet PBUH answered:

Hence, it is clear from the above hadith that the feeling of fear or illness is included in the category of the excuse which permits a person to not attend the mosque to perform the congregational Friday prayer. Furthermore, Syeikhul Islam Zakaria al-Ansari who is a great scholar of madhhab al-Syafi’e said:

Al-Qadhi Iyadh cited the opinions of scholars who stated that a person suffering from leprosy and vitiligo is restricted against entering the mosque, performing Friday prayer as well as socialize with others. Refer Asna Al-Mathalib, Zakaria Al-Ansari (1/215).

From this, the government’s action in issuing the Movement Control Order to stop the spread of the COVID-19 pandemic which includes restrictions against congregational and Friday prayers is a step that does not contradict the maqasid of syara’.

Other than the feeling of fear and illness, travel is also included as an excuse that permits a person to leave Friday prayer. Thus, people who are facing or experiencing a debilitation that prevents them from performing the Friday prayer, it is still wajib for them to replace it with Zohor prayer. The following we share several evidences and arguments presented by scholars regarding this issue:

“It is not wajib for travellers to perform the Friday prayer, this is the opinion of our madhhab and there is no khilaf among us.” Refer Al-Majmu’, Al-Nawawi (4/485).

Thus, a person who is travelling is commanded to perform Zohor prayer during his travels. This is tsabit from the actions of the Prophet PBUH who performed Zohor and Asar prayers through jamak taqdim in ‘Arafah on a Friday.

Second: There is a hadith narrated by Abdullah Ibn Mas’ud RA, where he said:

“Whoever misses two rakaat (Friday prayer), then he should pray four rakaat (Zohor).”

“Whoever misses the last rakaat (from the Friday prayer), then he should pray four rakaat (Zohor) prayer.”

Imam al-Haitsami when explaining the status of the above hadith stated that its isnad is hasan. Refer Majma’ al-Zawa’id, Al-Haitsami (2/192).

Third: There is also a narration from Abdullah bin Ma’dan, he narrated from his grandmother who said: “Abdullah Ibn Mas’ud RA said to us (women):

Hence, according to the above evidences and narrations, it is clear to us that when a person misses his Friday prayer, whether because he fell asleep or was late, or he has certain excuses permitted by syarak such as illness, fear, travel, or it is not obligated on the person such as for a woman, then they should perform the four rakaat Zohor prayer.

Lastly, we pray that Allah SWT will give us the correct understanding in religion. Amin.