IRSYAD AL-FATWA SERIES 490: THE RULING OF VIDEO CONFERENCE FOR WOMEN 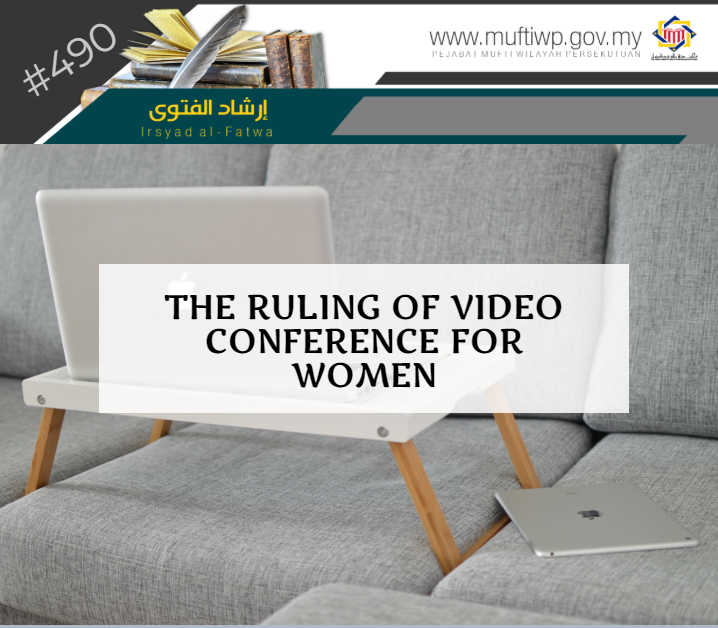 I have a question. In our current situation, in order to prevent the spread of COVID-19, online meeting is one of the best alternatives to have discussions or conference. My question is, is it permissible for a woman to show her face during the video call for the online meeting? This is to ease the interaction between the meeting members when discussing. Hope for an explanation regarding this matter.

We start with the saying of Allah SWT in the Quran:

According to Imam Ibn Kathir, this verse is a commandment from Allah SWT for the believing men to lower their gaze from things prohibited by Allah SWT. Do not look at something unless the matters permitted by syarak and to lower their gaze from things which are prohibited. The same, Allah SWT also commanded the believing women to also lower (preserve) their gaze and to guard their private parts (from prohibited things). And this is to distinguish them from the attributes and doings of the Jahili women. (See Tafsir Ibn Kathir Tahzib wa Tartib, by Dr. Solah al-Khalidi, 4/2342-2344)

Basically, covering awrah is wajib, for both men and women. And Islam highly emphasizes its follower to preserve the set boundaries.

Sheikh al-Islam Zakariya al-Ansari stated that the awrah boundary for a free woman in prayer or outside of prayer (to ajnabi man) is her whole body except for face and both palms either the upper or inner side of it to her wrist. Then, he cited from Ibn Abbas RA and others which states:

“What is explicit from her (the woman) is face and palms. Both are not considered as awrah as there is a need to show them. While it is haram to those because normally, face and palms will lead to fitnah.”

Imam al-Kasani al-Hanafi also states that face and both palms are not awrah and it is the flexibility given by Allah SWT as stated through His saying in Surah al-Nur verse 31. Besides, it is permissible for them to show their face and both palms when there is a need to do so like selling and buying, giving and taking. Therefore, according to the custom, all of these may not be done unless by showing their faces and both palms. (See Badai’ al-Sanai’, 5/121-122)

The same, Imam al-Dardir stated that women’s awrah to ajnabi men is their whole body except for the face and both palms. Both are not awrah even if it is still obligated for them to cover both if there is a fear of fitnah. Imam al-Sawi commenting on the statement by stating that it is permissible to see both (face and palms) and there is no difference to see the inner or outer side of the palm as long as it is not lustful (fulfilling the syahwat). If not, it is haram to see them. (See Hasyiah al-Sawi ‘ala al-Syarh al-Saghir, 1/289)

Hence, we know that the awrah for a woman towards ajnabi men is her whole body except face and both palms.

Referring back to the question asked, we are inclined towards the opinion that it is permissible for a woman to show her face during an online meeting as long as the matter does not lead to fitnah and degrading the virtue of a Muslim woman. This is because the face of a woman is not considered as awrah as decided by the majority of the scholars. Ibn Qudamah clearly stated that:

“There is no dispute among the scholars on the permissibility to see a woman’s face because it is not awrah.” (See al-Mughni, 7/97)

The same, Abu Said al-Khadimi stated that a man is not permitted to speak to an ajnabi woman without any need because it may lead to fitnah. However, when there is a need like being the eyewitness or trade or da’wah, it is permissible. (See Bariqah Mahmudiyah, 4/7)

Ibn Hajar al-‘Asqalani also stated in his book that it is permissible for a man to give salam to a woman and vice versa, on the condition that it does not lead to any fitnah (false accusation, doubt and the like). (See Fath al-Bari, 11/33)

Besides, normally, by showing face during an online meeting, it makes the discussion easier and smoother than when it only involves listening.

According to the above discussion and arguments, as well looking at the reality and waqi’ in Malaysia, we conclude that it is permissible for a woman to show her face during an online meeting as long as the action will not lead to fitnah and degrade the virtue and ethics of a Muslim woman.

Still, we would like to suggest that if it is possible to avoid showing her face during online meeting, it is better because it is safer (cautious step) and away of fitnah.

We end this with words of a salaf (past scholar):

“Whoever guard their gaze, then Allah SWT will shine him (guide) his insight and heart.” (See Tafsir Ibn Kathir Tahzib wa Tartib, by Dr. Solah al-Khalidi, 4/2343)

May Allah SWT give us clear understanding in practising the religion. Amin.