IRSYAD AL-FATWA SERIES 491: THE RULING OF A WOMAN HAVING AN ONLINE MEETING WITH A GROUP OF MEN 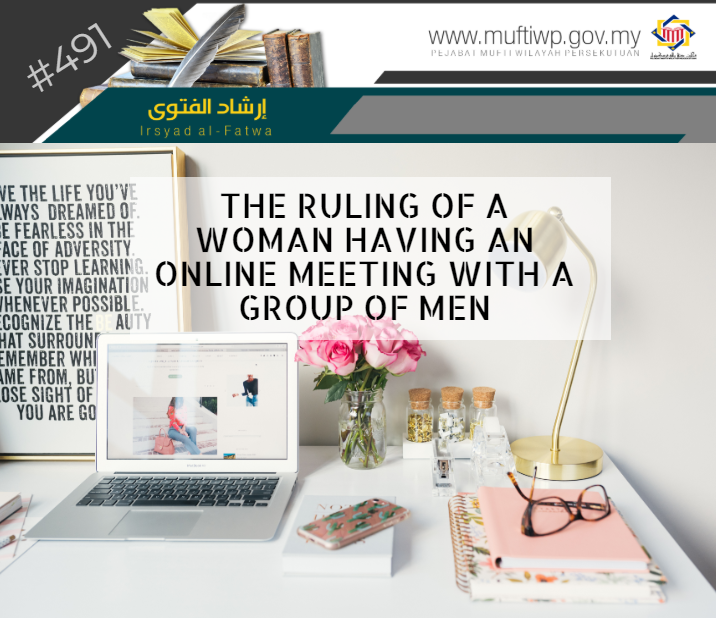 I have a question. What is the ruling of a woman to have an online meeting with a number of men? For example, a woman with three men. Hope for an explanation regarding this matter.

We start with a saying of the Prophet PBUH:

This hadith clearly shows that the action of a non-Mahram man and woman being alone is something that is prohibited in Islam. Imam al-Nawawi when commenting on the above hadith said:

"A man should not be alone with an ajnabi woman except with the presence of her mahram... And if an ajnabi man is alone with an ajnabi woman without a third person, then it is haram as decided by the scholars. The same for (its ruling) if the person who is together with the woman is someone she does not feel shy towards due to his young age like a child of two or three years old or so, because the presence of the child is the same is like he’s not there.” (See al-Minhaj fi Syarh Sahih Muslim, Dar al-Siddiq, 4/243-244)

Among the wisdoms of the prohibition of a man from being alone with a non-Mahram woman is because the action could lead to slander, false accusation and doubt from others as well as having the possibility of greater harm like committing sinful acts, adultery and the fall of family institution. This is because khalwah (being alone) itself is a huge opportunity for shaytan to enter in its effort to make the sons of Adam fall into destruction as well as creating even a greater fitnah towards them. This is in accordance with the saying of the Prophet PBUH:

Behold! A man is not alone with a woman but the third of them is Ash-Shaitan

Sheikh al-Mubarakfuri stated in his book that shaytan is with them both (the man and woman who are alone together) while whispering syahwat to them until they both fall into adultery. (See Tuhfah al-Ahwazi, 6/320)

Safe from Any Accusation, Slander, Suspicion and Others

The scholars have set a parameter for a prohibited khalwat in religion. Sheikh al-Syibramalisi and Sheikh Abdul Hamid al-Syarwani said that:

“Indeed, a line drawn on khalwah (which is prohibited) is upon meeting (between a non-Mahram man and woman) which is not safe from any accusation (slander and suspicion) in a normal setting, it is different when it can be assured that the gathering (meeting) is safe from being accused in a normal setting. Then, it is not included under khalwat (which is prohibited).” (See Hasyiah Nihayah al-Muhtaj, 7/163 and Hasyiah Tuhfah al-Muhtaj, 8/269)

Sheikh al-Islam Ibn Taimiyyah also stated that khalwat between a man and ajnabi woman is haram because it normally will lead to fitnah. And the original ruling of something which becomes a reason of fitnah is impermissible (cannot be done) because it is a way towards destruction. Therefore, it is wajib to be avoided if there is no necessity (to do it). (See Majmu’ al-Fatawa, 21/251)

This is supported by the statement of Imam Ibn Hajar al-Haitami which stated several examples or situations in which it is not considered as prohibited khalwat. Among them is when a woman enters a mosque where there is a man inside it. So, it is not categorized as khalwat because a mosque is a place frequently visited by people. And this is only allowed for mosques which are in an area which people passes through (people often enter and leave) where there will always be people there. The same (its ruling) for what resembles it like a road or others (any other public place) which becomes a frequent place for people to go, different with places which are not an area of people to pass by (isolated and quiet). (See Tuhfah al-Muhtaj, 8/269-270)

Therefore, it is clear that a place of people where people always passes through is safe and free from any fitnah and it will not cause any suspicions. It is different from places where no people pass by it, isolated, quiet and far from people because it may lead to fitnah, accusations and suspicion from others

Meeting Between A Woman and Several Men

“And the same for when some men gather with a woman, the ruling is haram different from a man gathers with many ajnabi women because according to a sahih opinion, it is permissible.” (See al-Minhaj fi Syarh Sahih Muslim, Dar al-Siddiq, 4/244)

Ibnu Hajar al-Haitami also stated that there is a facilitation given in which a thiqah (trustworthy) man is permitted to be alone with two thiqah women (or more) in which the women are respected by the man and not the opposite. (See al-Fatawa al-Fiqhiyyah al-Kubra, 4/107)

This matter is strengthened by a narration from Abdullah bin ‘Amr RA that some people from Bani Hashim had come to visit the house of Asma’ bint ‘Umais (the wife of Abu Bakar al-Siddiq). During that time, Abu Bakar al-Siddiq RA was not home. When Abu Bakar returned and entered his house, he saw them being together in his house. Abu Bakar was not content with what happened, then he plead to the Prophet PBUH. The Prophet PBUH answered: “I didn’t see (their visit) except there is goodness in it. Indeed, Allah SWT purify Asma’ bint ‘Umais from such thing (bad doings).” Then, the Prophet PBUH climbed up the minbar and said:

After this day no man should enter the house of another person in his absence, but only when he is accompanied by one person or two persons.

Imam al-Nawawi said that the general meaning of this hadith indicates the permissibility of two men or three (or more) to be alone with a woman of non-Mahram. However, the famous opinion according to the madhhab al-Shafi’e is it is still haram. Therefore, this hadith is interpreted to that the action is permitted towards people who are safe from the possibility of having a meeting that may lead them towards wrongdoings due to their piety, integrity or the like. (See al-Minhaj fi Syarh Sahih Muslim, Dar al-Siddiq, 6/274)

Still, we would like to stress that it is closely related and referred back to the guidelines set by the scholars of which it must be safe from any fitnah (slander, suspicion and etc.). Abu al-‘Abbas al-Qurtubi explained that the Prophet PBUH did not permit any man entering the house of a woman whose husband is not around while not being accompanied by another man because it is a sadd al-zari’ah which is closing the door towards khalwat that is prohibited and ruling out any possibility of slander. The Prophet PBUH had set the boundary by stating a man or two due to the piety of the people (at that time) in which slander (bad perception) will be lifted by that number. While today, the number is not enough (to lift the accusation), in fact, it must be with a greater number due to the spread of evildoings (in our society) having bad intention. (See al-Mufhim limaa Asykala min Talkhis Kitab Muslim, 5/503)

Coming back to the question asked, we see that online communication or video call using any application, in fact, is the same as any direct communication or interaction. Even if explicitly all hadiths on the prohibition of khalwat indicate the physical halwat (direct interaction) and not through these modern telecommunication systems (means) like video call and others. However, these undeniably can also open the door of fitnah, if it is done when there is no need and not following the set guidelines by the scholars.

Hence, we are inclined to the opinion that states it is permissible for a woman to have an online meeting with several men if there is a necessity to do so as well as if it is safe from any fitnah, bad accusation, suspicions and others.

This is because normally (according to the waqi’ of Malaysia), some numbers of either men or women are enough to avoid any bad accusation. In fact, online meeting is a need for those with careers or jobs that call for discussions to ease their work.

According to the above discussion and arguments, we conclude that we are inclined to the opinion that states it is permissible for a woman to have an online meeting with several men if there is a necessity to do so as well as if it is safe from any fitnah, bad accusation, suspicions and others.

We would also like to advise men and women to guard themselves the best they could as well as lowering their gaze from unnecessary things. May Allah protect us all from receiving His wrath.

May Allah SWT give us all clear understanding in religion. Amin.