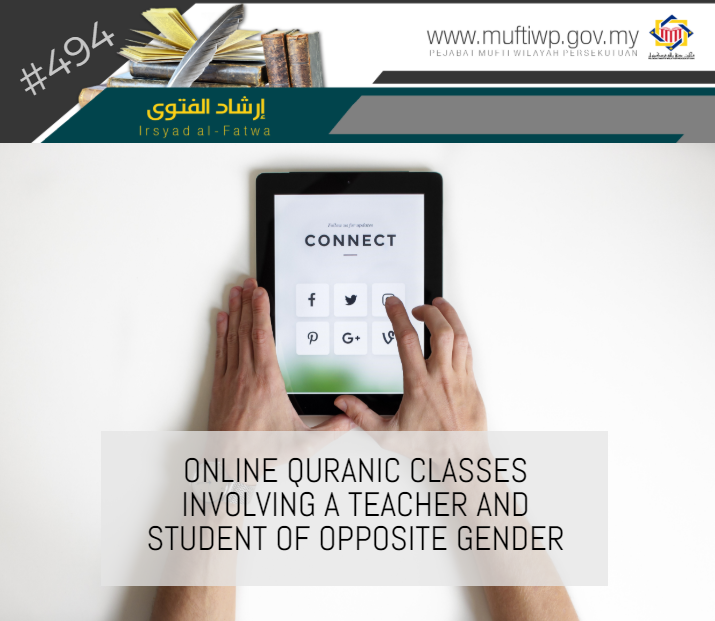 Hope for an explanation. Thank you.

Online Quranic study is a means to learn the knowledge of Quranic recitation utilizing modern technology. The concept of online Quranic classes is referred to as a teacher who teaches directly through social media from various applications such as Facebook, Instagram, Telegram, Skype, WhatsApp or phone calls. The method of this online learning is either the teacher recites al-Quran live (Facebook or Instagram Live) as general learning or examining the recitation of certain individuals through WhatsApp Video, Telegram Call, Facebook Messenger and phone calls. These noble efforts have ease people’s connectivity with Quranic classes. Allah SWT will bestow His blessings to those who learn the Quran and teach it to others. This is in accordance to a hadith narrated by Uthman R.Anhu where the Prophet PBUH said:

The lesson from the hadith is Muslim ummah is commanded to learn the Quran as well as teaching it whether to correct the recitation, understanding the meaning as well as practising all of the rulings set. (Refer Nuzhat al-Muttaqin Syarh Riyaad al-Salihin (740)

The method of learning al-Quran is through having a teacher or talaqqi. This is as the story in which the Prophet PBUH was taught by Jibril AS by talaqqi. Narrated by Fatimah R.Anha, she said that the Prophet PBUH whispered to me:

Every year Gabriel used to revise the Qur'an with me once only, but this year he has done so twice. I think this portends my death

To answer the question asked on the issue of online learning of al-Quran through between two individuals who are a man and a woman. We cite the opinion of Sheikh Dr Abdul Karim Zaidan who said that the original ruling for interaction between a woman and ajnabi man is haram to close the doors of fitnah (sad al-zarai’). However, the ruling may change to permissible due to exigent situation, hajah (Shari’e need) or due to the custom which is syar’ie like interaction related to property, as a witness, work and other needs. (Refer al-Mufassal fi ahkam Mar’ah wa bait al-Muslimin (3:426). While the opinion of a scholar Sheikh Muhammad ibn Saleh al-Munajjid stated that online interaction between man and woman is permitted only for matters related to religious need, knowledge like learning religious knowledge as well as any scientific knowledge under the scope of hajah (need) only. In fact, online interaction between man and woman is not considered as khalwat because it does not include physical meeting as the prohibition of physical meeting mentioned in a hadith narrated by Sayyidina Abdullah bin Abbas R.Anhuma where the Prophet PBUH said:

However, the situation like an unnecessary talk between man and woman online without any purpose is prohibited because it may lead to fitnah and opens the door of destruction. [1]

Hence, the matter of learning such as taking online Quranic class which includes only two individuals of the opposite gender is permitted on the condition that they must maintain the boundary like wearing clothes that cover the awrah completely, no tabarruj (excessive makeup) and preserving communication ethics while interacting with the opposite gender. The boundary is stated through a dalil set by syarak as the following:

The above verse is a commandment from Allah SWT to the Prophet PBUH to advise the believing men to lower their gaze from the women and awrah which are not halal for them. (See al-Tafsir al-Muyassar,:(353). The verse also explains the obligation of a woman to cover her adornments except which are zahir (visible/normally seen). The meaning of adornments is two things which are the clothes which cover her physical body and also the ornaments. (See: Tafsir al-Kabir (23/363). While the meaning of ‘except that which (necessarily) appears thereof’ is the face and both her palms. (See: Tafsir al-Quran al-Azim (6/42). Therefore, awrah for a woman in front of ajnabi man is her whole body except for her face and palms.

Other than that, tabarruh is impermissible which means excessively adorn oneself to show her adornments and beauty in front of other men. This is in accordance with the saying of Allah SWT:

And abide in your houses and do not display yourselves as [was] the display of the former times of ignorance.

Imam al-Syaukani when commenting on the above verse states that tabarruj is when a woman shows some of her adornments and beauty which (supposedly) wajib to be covered, of which her action may attract attention (syahwat) of men. (See Fath al-Qadir, 4/320)

Besides, she should also maintain the ethics in interacting with the opposite gender by using a firm voice without softening it. This is in accordance with the saying of Allah SWT:

“Then do not be soft in speech [to men], lest he in whose heart is disease should covet, but speak with appropriate speech.”

The meaning of the above verse is the prohibition of a woman speaking with a soft voice towards an ajnabi man. (See Tafsir al-Quran al-Azim, 6/477)

We suggest prioritising teacher of the same gender as the student during the online session if there is a choice. However, if there is no choice, then the session between opposite gender is permitted and we recommend that either the woman as the student or the teacher himself to ask for permission from her husband and it is best to be accompanied by a mahram, husband or a thiqah (trustworthy) woman during the online session. The matter is safe from any fitnah as well as able to close the door towards destruction (sad al-zarai’). We also recommend learning al-Quran through video call rather than a normal phone call. This is because through a video call the teacher’s face is visible and this would ease the purpose of looking at the teacher to see the correct method of pronouncing the makhraj of the letters.

After analysing the arguments presented, we are inclined to state that the ruling of having online Quranic class which include only two individuals of the opposite gender is permissible as long as it fulfils the dhawabit (syarak guidelines) set like preserving the dress code and interaction ethics when interacting with the opposite gender. Lastly, may our society be blessed with the love towards al-Quran. Let’s strive to recite, understand the words of Allah and make du’a for al-Quran to become our saviour in the hereafter as stated by the Prophet PUH:

“Recite the Qur'an, for on the Day of Resurrection it will come as an intercessor for those who recite It.”