IRSYAD AL-FATWA SERIES 495: THE RULING OF PERFORMING THE FRIDAY PRAYER THROUGH LIVE STREAMING 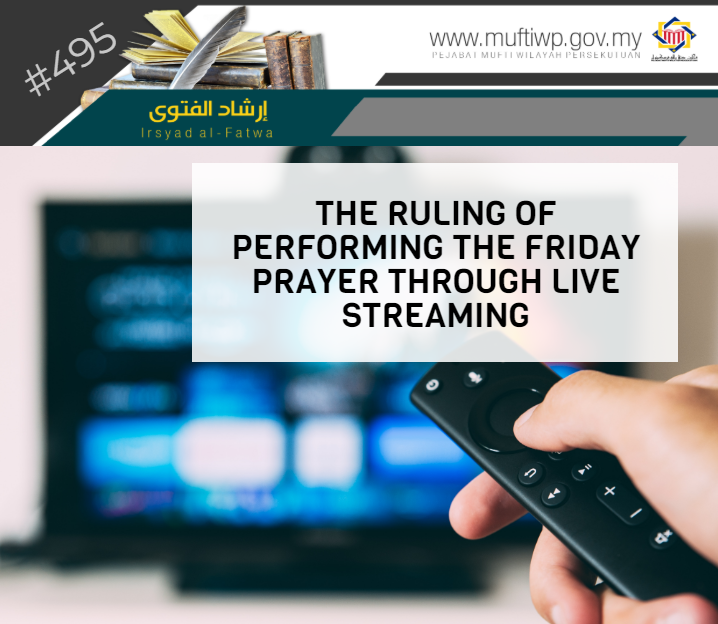 I have a question. Is it permissible for us to perform the Friday prayer through live streaming? Hope to get an explanation on this matter.

“O you who have believed, when [the adhan] is called for the prayer on the day of Jumu'ah [Friday], then proceed to the remembrance of Allah and leave trade. That is better for you if you only knew.”

The above verse is among the evidences of the sanctioning of the obligation of the Friday prayer. Furthermore, the Friday prayer is a special blessing for the ummah of Prophet PBUH so that they will be able to attain the honour of this day. (See al-Fiqh al-Manhaji, 1/198)

The Friday Prayer Is Obligated to be Performed in Congregation

We would like to emphasize that the Friday prayer is an obligation that should be performed in congregation. This is stated by the Prophet PBUH:

Dr Wahbah al-Zuhaili even stated in his book that the scholars have agreed and reached a consensus that the obligation of the Friday prayer is that it is to be performed in congregation. (See Mausu’ah al-Fiqh al-Islami wa al-Qadhaya al-Mu’asirah, 2/248)

The Conditions of Following an Imam for Congregational Prayer

“It is conditioned for the prayer to be valid (for the congregational prayer) that the makmum must know all the changes (of the movements in prayer) of the imam, whether both (imam and makmum) are praying inside the mosque or others (outside a mosque) or one of them is inside the mosque while the other is outside of the mosque. This has been agreed (by scholars). Scholars of madhhab al-Syafie said that the makmum’s knowledge on the matter may be by hearing the imam or people behind the imam or seeing the movement of the imam or the people behind the imam. And cited the ijma’ (consensus) on the permissibility of holding onto each of these matters.” (See al-Majmu’ Syarh al-Muhazzab, 4/309)

Likewise, al-Khatib al-Syirbini said that it is conditioned that the makmum must know every movement of the imam (in prayer), so that he (the makmum) is able to follow, whether it is the imam or others in the saf (other makmum) or hear (the voice of the imam) or the voice of muballigh. (See Mughni al-Muhtaj, 1/494)

Moreover, al-Sayyid Ahmad al-Syatiri also stated among its conditions are:

“They should be assembled (at a certain place) both the imam and makmum… whether it is in a mosque or other places (outside of the mosque) of which the distance between the two of them are not more than approximately 300 cubit.” (See Nail al-Raja’, Pub. Dar al-Minhaj, pg. 211)

When we consider this condition, in truth to comes back to the previous condition of which both of them should be assembled in a certain place which would enable the makmum to see and know the movements of the imam. Thus, in the book al-Fiqh al-Manhaji it is stated that if both the imam and makmum is inside a mosque, then it is valid to follow the imam regardless of the distance between them even when they are obstructed by walls which can be walked through. Imam Ibn Hajar al-Haithami also stated the same in his book. (See al-Fiqh al-Manhaji, 1/181 and Tuhfah al-Muhtaj, 2/313)

However, both the imam and makmum who is praying outside of a mosque or the imam is in the mosque and the makmum is outside of it, this is when it is conditioned that they should not be distanced too far away. In this matter, the scholars set three additional conditions:

Whereas, according to the opinion of Imam Kamaluddin al-Damiri when the makmum see the imam or see a part of the saf or hear the voice of the imam or the muballigh, then it is included as the reasons that enables the makmum to know the movements of the imam in prayer. However, according to us and the majority of scholars, just (setting the condition) for the said matter is insufficient, but the condition that both the imam and makmum must be assembled (in a certain place) is necessary, for if only the knowledge (about the movements of the imam) is sufficient, then surely the commandment to go to the mosque to perform the Friday prayer is abrogated (inapplicable). The same for the call to perform the congregational prayer (at the mosque). And every individual will perform their congregational prayer in their own homes or markets following the imam in the mosque if they know them (the movements of the imam). This clearly contradicts al-Quran and sunnah. (See al-Najm al-Wahhaj fi Syarh al-Minhaj, 2/375)

The Ruling of Performing the Friday Prayer Through Live Streaming

Coming back to the question asked, performing the Friday prayer through live streaming is impermissible and the prayer is invalid, for it does not fulfil the valid conditions of following the imam in congregational prayer as stated by scholars.

Likewise, the purpose of congregational prayer is actually to assemble Muslims (in the literal sense of the word). Thus, it needs a place and the continuation of the safs (rows). Thus, it is impermissible to be performed following a live program on television or radio (or live streaming) for it does not fulfil the meaning meant by syarak. If it is permissible, surely anyone can just perform the five obligatory prayers in their own homes. Unquestionably, this denies the (purpose) sanctioning of the Friday and congregational prayers (which is to assemble people). (See Majmu’ al-Fatawa wa Rasail Syeikh Ibn al-Uthaimin, 15/213)

According to the above discussion and facts presented, we would like to conclude that performing the Friday prayer through live streaming is impermissible and the prayer is invalid for it does not fulfil the conditions of following the imam in congregational prayer as stated by scholars.

Thus, if there is a debilitation which hinders a person from performing the Friday prayer at the mosque, such as the movement control order that is currently in effect, then one should turn to the rukhsah (facilitation) given by syarak which is to replace it by performing the Zohor prayer in everyone’s respective homes.