IRSYAD AL-FATWA SERIES 499: WILD DONKEY WHICH IS HALAL TO BE EATEN, DOES THIS ONLY REFER TO ZEBRA? 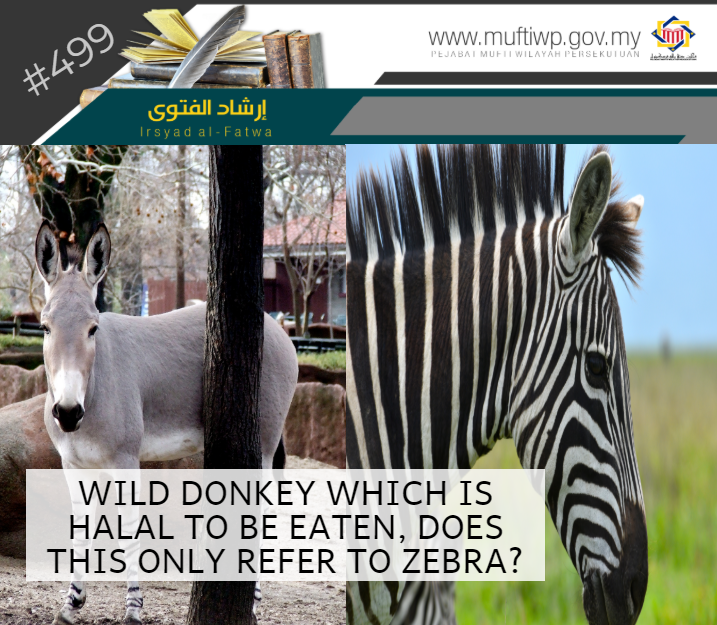 I have a question. In Islam, wild donkeys are halal to be eaten. However, does this only refer to zebras? Hope for an explanation pertaining to this matter.

We start with the narration from Jabir bin Abdullah RA where he said:

We ate during the time of Khaibar the (flesh) of horses and of wild asses, but Allah's Messenger (ﷺ) prohibited us (to eat) the flesh of domestic asses.

Wild donkey is one of the hunted animals which is permitted to be eaten. And the scholars have decided an ijma’ (scholarly consensus) on the permissibility to eat its flesh. (See al-Majmu’ Syarh al-Muhazzab, 9/9, Minhah al-‘Allam fi Syarh Bulugh al-Maram, 9/203 and Taudhih al-Ahkam, Dar Ibn Hazm, 3/496)

Hence, the permissibility to eat the flesh of wild donkey is undeniable. However, a question arises which is how a person can determine or classify it as a wild donkey? Are their characteristics the same as a domestic donkey in terms of color and shape or is it actually totally different?

What is a wild donkey?

Sheikh Abdullah al-Bassam said that there are characteristics of wild donkeys which are the same as of the domestic donkeys except its size is smaller than wild donkeys. And wild donkeys are currently known as al-Wadhihi (الوضيحي). (See Taisir al-‘Allam Syarh ‘Umdah al-Ahkam, pg. 711). While in other books, he stated that wild donkey is named as al-Fara’ (الفراء), and able to live longer (generally long) as cited by Imam al-Damiri in his book. (See Taudhih al-Ahkam, Dar Ibn Hazm, 3/496 and Hayah al-Hayawan al-Kubra, 1/359)

Dr Soleh bin Abd al-‘Aziz Sindi also stated that some contemporary scholars said that wild donkey is al-Mahah ( - which is oryx) or currently known as al-Wadhihi. However, they state that this opinion is not true because there is none among the past scholars who said likewise. In fact, they put al-Mahah or this oryx under the category of wild buffalo and not among the wild donkeys. [1]

Sheikh al-Jawhari in his book said al-Mahah is wild buffalo. (See al-Sihah, 6/2499). Also, Imam Kamaluddin al-Damiri has included it under the category of wild buffalo through his saying:

“Wild buffalo: This type consists of four categories which are oryx, deer, yahmur (a species of deer) and hartebeest (a species of antelope).” (See Hayah al-Hayawan al-Kubra, 1/220)

Therefore, it is clear to us that oryx is not wild donkey meant by the scholars.

Wild donkey is a tame donkey

Pertaining to this matter, Sheikh Abdullah bin Soleh al-Fauzan has stated that wild donkey is one of the hunted animals which resemble tame donkey (domestic donkey) and its flesh is among the good thing. (See Minhah al-‘Allam fi Syarh Bulugh al-Maram, 9/203).

Also, Imam al-Mawardi stated that wild donkey and tame ones (domestic), are gathered between these two which are the same in terms of name and shape. However, it is different for the ruling between these two in which it is permissible for wild donkey (to be eaten) and it is prohibited for domestic donkey because both live in two different habitats even they both live on land. (See al-Hawi al-Kabir, 15/62)

Sheikh Muhammad bin Ibrahim clearly said that there are many wild donkeys in Arab peninsular once upon a time. Its built is almost similar to tame donkey (domestic) in terms of having hoof, two long ears and other characteristics. It does not (originated) from the tame donkey and then becoming wild. However, it is a totally different species. Therefore, wild donkey (its flesh) is included under things which are bad. (See Fatawa wa Rasail al-Syeikh Muhammad bin Ibrahim Âli al-Syeikh, 12/203)

Is zebra included under the category of wild donkey?

Zebra and wild donkey are two different species even when they are both grouped in the same genus and family which is genus Equus under the family of Equidae. According to the World Encyclopaedia, wild donkey is similar to zebra, but has no stripes, except there are a few of it at their feet. Among the species of wild donkey is kiang, kulan and onager (Equus hemionus). All types of wild donkey are rarely seen and are facing extinction. While for zebra, there are three species of zebras which are plains zebra (Equus burchelli), Grevy’s zebra and mountain zebra. There is also a species of zebra which is quagga, but already extinct in the late 1800s. (See Ensiklopedia Dunia, Translated by DBP, 10/531, 11/560 and 15/336)

In addition, there are some clear distinctions between zebra and donkey [2] which are:

Dr Soleh bin Aba al-‘Aziz Sindi has grouped zebra as one of the wild donkeys. [4] This matter is also affirmed by the statement of Shihab al-Din al-Nuwayri which stated on the types of wild donkey:

“There are among them with black and white rectangle stripes along its body, and there are the ones with the same round (distribution). There is a type named akhdari which is the most long-lived ones. Indeed, Abu al-Faraj al-Babbagha’ has stated in his risalah by stating that there are also female donkeys which are black and white in colour…” (See Nihayah al-Arab fi Funun al-Adab, 9/327)

Imam al-Munawi indirectly stated some characteristics of wild donkey in his book through his saying:

“It is nothing but like a wild donkey which is brought into the country. Then, people encircle it due to being amazed by its stripes (on its body) …” (See Faidh al-Qadir, 1/481)

However, wild donkey is not only limited to the black and white striped ones. It is one of its other types. Actually, there are many other types with different colour. This is as what is stated by Imam al-Damiri:

“And the color of wild donkeys are different”

The striped wild donkey or the zebra is more known in this time when compared to other types because of its large number and there is very few which are still alive or already extinct. Dr Soleh bin Abd al-‘Aziz Sindi said that if we go through and read classical books of al-Adab (Arabic literature), we will get to know that there are many wild donkeys found in Arabic peninsular, but there is none which states on this striped donkey. [5] Dr. Abdurrahman Naseer al-Saeed stated that the characteristics of wild donkeys mentioned in classical Arabic proses are dust colour with a little reddish white, with a white on the side (a little) and this is (white on the side) is its main distinction with the tame donkey. The early generation of the Arabs do not know (recognise) this zebra. It is first known by the people of Iraq during the late 4th century and in Egypt in the 8th century. [6]

Based on the above discussion and arguments, we conclude that wild donkey is not only limited to the ones with stripes which is currently known as zebra. However, there are other wild donkey such as onager, kiang, kulan ad etc.

All these types of wild donkeys are halal to be eaten no matter from among the striped ones (zebra) or not. The scholars cited an ijma’ on the permissibility to eat the flesh of wild donkeys. This matter has been discussed by us in-depth in the article al-Kafi li al-Fatawi Series 326 [7]

Also, wild donkeys are not originated from tame donkeys, but both are of different types and species although they have similarities as well as being alike. Dr Abdurrahman Naseer al-Saeed said that there is a confusion to majority of the people or the society in determining wild donkey (حمار الوحش) because there is no clear picture on it as most of its species are already extinct. [8]