IRSYAD AL-FATWA SERIES 520: THE RULING OF TRYING TO GET LIKES ON FACEBOOK TO RECEIVE CERTAIN REWARDS 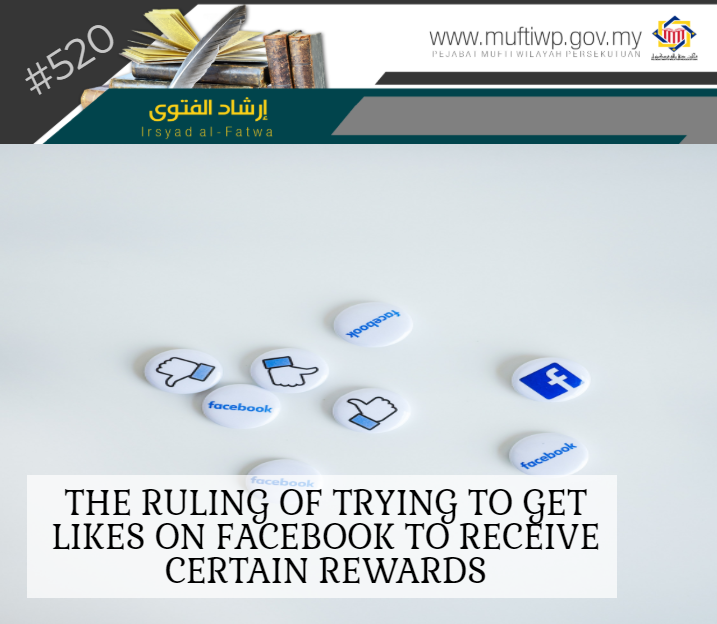 What is the ruling of trying to get likes for any post on Facebook in order to receive a certain gift? For example, a wife promises her husband to give a branded helmet if his post about a dish she made gets 50,000 likes. Is it a prohibited bet?

Betting Which is Prohibited

The definition “bet” in the Malay Language refers to several meanings as the following:

Based on the question, the intended meaning from the questioner is the first one, in which the action of trying to get likes is a form of gambling. Gambling is haram in Islam because it denies the concept of ijab and qabul, or offer and acceptance in the rulings of selling and buying. When the buyer offers a price for certain stuff or services, he does not know whether the buyer accepts the offer by giving the intended stuff.

We refer book al-Fiqh al-Manhaji (6/36) which states as the following:

“Selling and buying that partakes some form of gambling include that has no clear statement on the stuff, or there is a denial of needs for one of the parties.”

Among the evidence on this prohibition is the saying of Allah SWT:

O you who have believed, indeed, intoxicants, gambling, [sacrificing on] stone alters [to other than Allah], and divining arrows are but defilement from the work of Satan, so avoid it that you may be successful.

According to Imam Fakhruddin al-Razi, gambling may lead to enmity, condemn, dispute and a form of taking others’ stuff unlawfully as well as drive people away from remembering Allah and performing prayer. He added, betting nurtures the feelings of wanting to win, especially when facing defeat where every bit of his possession is used in gambling that makes him willing to sell away his wife and children. The loser definitely will fall into poverty and hold a grudge to his opponent who has won over him and took away all his wealth which makes unending enmity and hatred go within the society. In the religious perspective, the gambler will be away from remembering Allah and performing prayer because he is busied with hopes to win or angry due to being defeated in gambling. In fact, even if he wins, surely his winning will sink it abruptly in business that he will not remember anything other than the wealth that he gains.

In the book al-Fiqh al-Manhaji states:

The ruling of giving wages for an effort

We are of the opinion that this question will never be complete unless it is also mentioned on the ruling of ju’alah or giving wage upon a service. According to al-Fiqh al-Manhaji (6/161):

“According to syara’, ju’alah or a reward is promising an identified return to a specific work, whether it is identified or not, by an identified person or not.”

The dalil for the sanctioning of this concept is the saying of Allah SWT:

They said, "We are missing the measure of the king. And for he who produces it is [the reward of] a camel's load, and I am responsible for it."

Even if this verse states on the Shari’a of the people from the past, but there are sources from our Shari’a which permits it as mentioned by the hadith narrated by Sai’d al-Khudri RA, he said:

Some of the companions of the Prophet (ﷺ) went on a journey till they reached some of the 'Arab tribes (at night). They asked the latter to treat them as their guests but they refused. The chief of that tribe was then bitten by a snake (or stung by a scorpion) and they tried their best to cure him but in vain. Some of them said (to the others), "Nothing has benefited him, will you go to the people who resided here at night, it may be that some of them might possess something (as treatment)," They went to the group of the companions (of the Prophet (ﷺ) ) and said, "Our chief has been bitten by a snake (or stung by a scorpion) and we have tried everything but he has not benefited. Have you got anything (useful)?" One of them replied, "Yes, by Allah! I can recite a Ruqya, but as you have refused to accept us as your guests, I will not recite the Ruqya for you unless you fix for us some wages for it." They agree to pay them a flock of sheep. One of them then went and recited (Surat-ul-Fatiha): 'All the praises are for the Lord of the Worlds' and puffed over the chief who became all right as if he was released from a chain, and got up and started walking, showing no signs of sickness. They paid them what they agreed to pay. Some of them (i.e. the companions) then suggested to divide their earnings among themselves, but the one who performed the recitation said, "Do not divide them till we go to the Prophet (ﷺ) and narrate the whole story to him, and wait for his order." So, they went to Allah's Messenger (ﷺ) and narrated the story. Allah's Messenger (ﷺ) asked, "How did you come to know that Suratul- Fatiha was recited as Ruqya?" Then he added, "You have done the right thing. Divide (what you have earned) and assign a share for me as well." The Prophet (ﷺ) smiled thereupon

The contract of ju’alah is a bind, which means one is obligated to pay when the work is done. However, if it is cancelled before the work even begins, it is the right of the giver. It is also said:

“This contract is attributed to permissibility and not wajib. It is even open to any revocation by the reward giver anytime. The same is for the one who does the work that it is permissible for him to revoke his work anytime. Either it is decided by the other party or not. Whether it is identified or not. This is because this contract is a contract to do a specific work which is not identified to receive a specific wage. Therefore, any party may revoke it.

If this contract is revoked by the worker, he has no right upon anything even if he had done part of the job. This is because he is only rightful of the reward when he finishes it. In this matter, the worker himself revokes, therefore, his right is dismissed.

Therefore, he does not have to make any payment. If it is revoked after the job has begun, the giver should pay him according to a corresponding wage according to the job done. This is because part of the service is used with payment as the condition. This means that the giver is obligated to pay his wage.”

The ruling of promising a conditional gift

In the discussion before, the contract of ju’alah means giving wage for a job done. While in the context of promising a gift, the discussion is different. We already explained on the issue of fulfilling a promise in Bayan Linnas Series 149: The Status of Settling PTPTN Loan Through Shari’a Perspective which touches on the issue regarding a manifesto in General Election. Briefly, the scholars are of different opinion on the ruling of fulfilling promises. Majority of the scholars said that its ruling is Sunnah because it is a commitment to do good. Some scholars obligate the fulfilment if the promise was made in the form of ta’liq like if a person does something, he will get something in return. Some of them obligate it in an absolute manner because breaking a promise is an attribute of a munafiq. This final opinion is chosen in that particular article, but its implementation is in accordance with the capability of the reward giver.

Based on the facts and explanation above, we are inclined to state that the ruling of getting a certain amount of likes on Facebook to receive some wages or rewards is permissible. The action is not considered as a bet in the sense of gambling. If the offer is in the form of wage, so its ruling is according to the contract of ju’alah. While if the offer is in the form of reward, it is considered as promising to give certain gifts. Wallahua’lam.

May this explanation give the answer to the one who asks. We pray that Allah SWT will bestow us provision from halal sources so that it helps us to be His slaves who are always thankful of Him. Ameen.