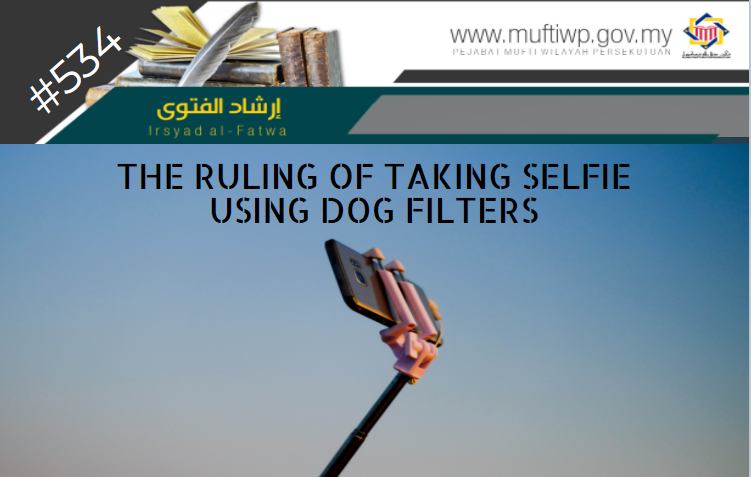 Assalamualaikum wrm. wbt. What is the ruling of taking selfie using dog filters?

The ruling of taking selfie using dog filters is makruh because it is considered as resembling the behaviour of the dog without any need. However, if it may lead to the mocking of Allah’s creation due to changing the original form, thus, become haram.

Basically, shari’a prohibits us from behaving like the animals. This prohibition is to elevate humans’ position compared to other creation which is lower in position. Allah SWT says:

We have certainly created man in the best of stature;

Imam Ibn Jarir al-Tabari said when commenting on the verse, it is most likely that Allah means:

“We have certainly created man in the best and perfect form”

It is narrated from Anas bin Malik RA that the Prophet PBUH says:

“In this hadith, there is an inclination towards prohibition of resembling the animals which are lower in position in terms of behaviour and character, in the ways of sitting and the like.”

Hence, the ruling of spreading or putting the forearm flat to the floor during sujud is makruh even if done due to being tired of prostrating for too long for people who prays individually. Sheikh Zakaria al-Ansari said:

“It is makruh (the ruling) to spread both hands (while prostrating) based on the hadith mentioned in al-sahihain ‘do not put your forearms flat with elbows touching the ground like a dog’. It clearly states that it is makruh even if one prolongs his prostration which makes him feel tired that he lifts himself by his both hands while laying his forearms towards the knee”

The ruling mentioned above is among the examples of variety of rulings that resembling animals is a reprehensible act by the shara’. Even if it is included in makruh. Therefore, the scholars set a maxim:

“Resembling the animals is prohibited to be done”

At the same time, if the resemblance is done due to having shari’e need, then it is permissible. For example, to play with children. We cite from the book Hayah al-Sahabah written by Sheikh Muhammad Yusuf Al-Kandahlawi that the Prophet PBUH once played with his grandchildren and the youngsters among the Companions by resembling himself like an animal carriage. Among them is the story where Saidina Umar bin al-Khattab saw Saidina Hassan and Husin rode the Prophet PBUH on his back. Then he said: “The best of horse is what beneath you both. Then the Prophet PBUH answered:

“And the best of horsemen are them both”

The narrators are trustworthy (thiqah). Al-Bazzar narrated it with a weak sanad.

According to Imam Ibn Asakir, there is a narration of Ibn ‘Abbas that a man saw Saidina Hassan rode the Prophet PBUH on his back then he said: O children, the best of mount is the one you are riding.

Then the Prophet PBUH replied:

Imam al-Tirmidhi said in a narration from al-Barra’ bin ‘Azin that he once saw Saidina Hassan ride on the Prophet PBUH’s back while he is praying then he said:

“The best of mount is your ‘animal mount’”

Narrated by al-Tabrani in Al-Mu’jam Al-Awsat (no 3987). Al-Haithami evaluated this hadith as hassan. He stated in his book Al-Majma’ Al-Zawaid (no 15079).

In a narration from Jabir bin Abdullah RA, the Prophet PBUH once crawled while having Saidina Hasan and Husin on his back then he said:

“The best of camels is your ‘camel’ and the best of loads is you two.”

As a comparison, this exception also takes place in the issue of taking dolls as toys. Even though the ruling of owning dolls is haram originally, but due to being a toy for the children, then it becomes permissible. The following articles may be used as reference:

Based on the above facts and conclusion, we are of the opinion that the ruling of selfie using dog filter is makruh due to the fact that it is considered as resembling animals without need. While if there is need like to play, then it is permissible.