IRSYAD AL-FATWA SERIES 541: THE RULING OF ADVERTISEMENT WITH OBSCENE MESSAGE 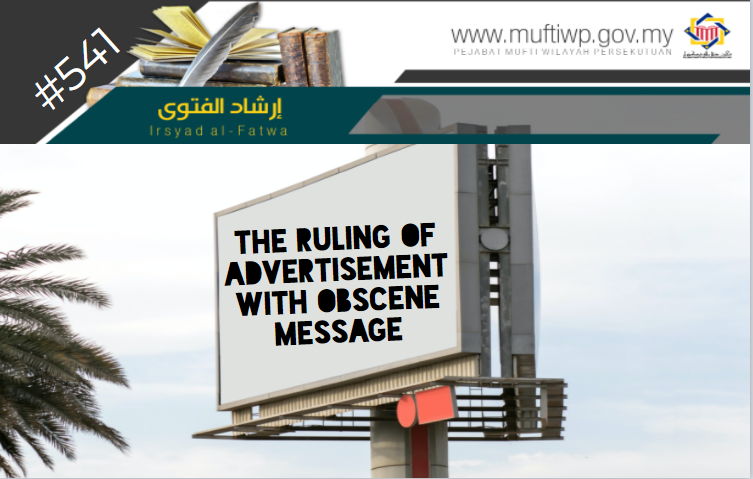 There are advertisement taglines with obscene message to show that the product with sexual elements are proven of its effectiveness. This strategy of advertising a product is unethical when it highlights words which portray personal assets for women and men. This is clearly irrelevant with the custom of Malaysian community as well as contradicts Islamic values. Besides, woman models are usually showcased as the subject of the advertisement.

Awrah is parts of the body which cannot be revealed and shown by a man or a woman to others. (Refer al-Mausu’ah al-Fiqhiyyah al-Kuwaitiyyah (31/44).

Muslims are sanctioned to preserve the awrah and protect their honor. This is based on the saying of Allah SWT:

The commentary of the words وَيَحْفَظْنَ فُرُوجَهُنَّ means preserving the honor by covering the awrah and protecting oneself from adultery. (Refer Tafsir al-Baidhawi 4/104). Preserving one’s honor from immorality or from the eyes of the people. (Refer Tafsir al-Maraghi 18/98)

The words وَلَا يُبْدِينَ زِينَتَهُنَّ contains the meaning of majaz mursal which is mentioning something (accessories like bangle) but what is meant is its place (body parts). This is for the purpose of giving the meaning of mubalaghah (excessiveness/stress out) towards the command of covering the body and protecting oneself. (Refer Tafsir al-Munir 18/210). It is understood that the command of lowering the gaze, covering the awrah and preserving the honor are the steps to avoid immoralities from happening.

The word يُبْدِينَ originates from the word أبدى which means exposing something. (Refer al-Mu’jam al-Wasit)

While the act of telling or saying matters which are concealed will also tarnish one’s honor as it seems as exposing and telling on others’ personal assets with the purpose of showing the effect of the products promoted. Advertisements using taglines with obscene message by visualizing physical assets of a woman or a man may lead to immoralities and open the door for the people to visualize in mind of others’ parts of the body and raise sensualities.

Every means that may visualize or elucidate the awrah of physical body by the telling from the opposite sex is prohibited. This is based on a hadith narrated by Ibn Mas’ud RA where the Prophet PBUH said:

Ibn Mas'ud reported God’s Messenger as saying, “A woman must not come in close contact with another and then describe her to her husband, for that is as if he were looking at her.”

Imam al-Qabisiy when commenting on the above hadith says:

Hence, women or men are prohibited to become the subject of advertisement with obscene or sexual message. This is as methods of closing the door (sad al-dzara’i). In fact, the implications of advertisements using the obscene taglines may ruin the mind of the children and it is worried may also destruct the society to the pit of immoralities.

At the same time, among the conditions of billboard license approval is visual promoting intoxicants, cigarettes, immoral pictures and unethical behavior as well as obscene message are totally prohibited to be advertised. [1] The visual of the billboard shall be referred to Dewan Bahasa dan Pustaka to get the approval. [2] While it is an offence to put up a structure without the approval under the Street, Drainage and Building Act 1974 (Act 133) and the offence of showcasing an advertisement without license under the By-laws of advertisement 1980 which is imposed for each day. [3]

In conclusion, after analyzing arguments presented, promoting a product by portraying men or women model following by tagline with obscene message is haram. This is because any advertisement through billboard, mass media and pamphlet with obscene taglines may raise sensualities to each level of people of the public. The prohibition is to close the doors towards a bigger destruction based on the method of sadd al-dzara’i. Hence, sellers who wish to promote their products as well as services should always take care of protection of the honor and chastity as well as avoiding matters which may lead to immoralities.

Lastly, we stress out that sellers should always preserve moral values in advertising their products.