IRSYAD AL-FATWA SERIES 557: HOW TO BATHE (GHUSL) THE DECEASED WHO DYED HIS/HER HAIR? 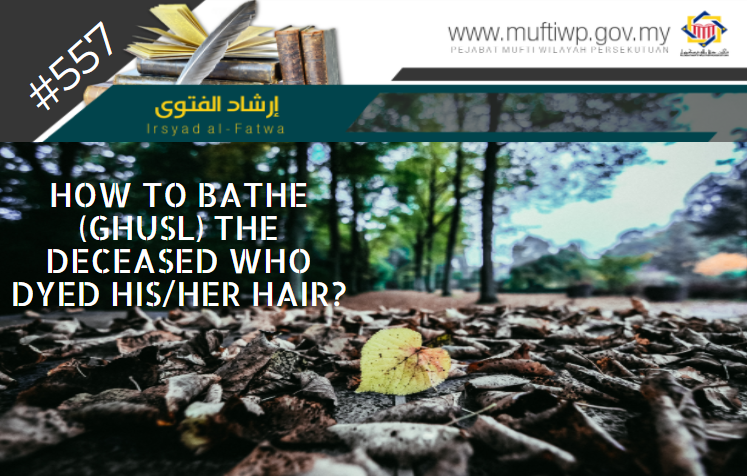 Assalamualaikum. I would like to ask how to bathe a deceased who dyed his or her hair?

Hoping for an explanation. Thank you.

If one fails to remove the colouring, then it is best to shave his or her head to make sure water reaches the part and all other parts that are wajib to be washed (hair and scalp) or the person who bathe performs tayammum for the deceased while washing all parts of the body which are not related. Usually, most hair dyes are repellent to water.

Firstly, the bare minimum for funeral bathing is to make sure water reaches all parts of the body in one washing. This is mentioned countless times in Fiqh books of al-Shafi’e, among them:

“The bare minimum for funeral bathing is by making sure water reaches all parts of the body in one bathing. This is because it is fard like the commandment of ghusl (obligatory bathing) for a living person.” (Refer al-Iqna’ fi Halli Alfaz Abi Syuja’: 199-200).

While the complete funeral bathing is already explained in another article. Kindly refer to AL-KAFI #1050: TATACARA PEMANDIAN JENAZAH YANG BETUL (AL-KAFI #1050: THE CORRECT METHODS OF BATHING THE DECEASED).

If the dye is made from materials that do not impede water from reaching the scalp, like a little amount of oil and still able to absorb the water, then he or she should be bathed like usual, then is prayed upon. This is as mentioned by Imam al-Nawawi in al-Majmu’:

“If on some parts of his body contains wax, flour, henna or the like, which impede water from reaching the parts, then his taharah is invalid, whether the amount is little or many. However, if on his hand or any parts of the body still has traces of henna in colour, but not in essence, or traces of diluted oil, in which water will reach the skin by flowing and does not stick, then the taharah is valid” (Refer al-Majmu’ Syarh al-Muhazzab, 1:467).

While if the dye is made from materials that impede water from reaching the scalp, then it is not enough to fulfil the obligation of ghusl which is making sure water reaches all parts of the body.

Therefore, the scholars are of the opinion that when there are excuses to perform the obligation, then tayammum should be performed upon the deceased. Imam Khatib al-Syarbini stated in his book, al-Iqna’:

Whoever has excuses from fulfilling the obligation of ghusl, then tayammum should be performed upon the deceased; the same as in an obligatory bath. (Refer al-Iqna’ fi Halli Alfaz Abi Syuja’: 200)

Besides, it is also wajib to bathe the deceased by bathing all other parts that are not related to the issue like usual. While parts that are impeded from being reached by water are replaced with tayammum after the bathing, then is prayed. This is as mentioned by Imam al-Bujairimi in his hasyiah:

“It is valid to perform tayammum upon the deceased and prayed upon in this situation according to the final opinion from Imam Ibn Hajar. Next, it is wajib to bathe the deceased all parts of him or her other than foreskin (qulfah), if it fails to be removed”. (Refer Tuhfat al-Habib ‘ala Syarh al-Khatib, 2:268).

Besides, there is also an opinion to shave the deceased’s dyed hair. In this matter, there is khilaf among the Shafi’e scholars on the ruling of shaving the deceased’s hair. Imam al-Nawawi stated on the khilaf that:

“Among the scholars of our madhhab (al-Shafi’e), some are of the opinion that it is permissible to shave the hair and clip the nails, and some among them are not of that opinion. Imam al-Shafi’e said: ‘To not shave the hair or clip the nails are what I like better'. Imam al-Nawawi said: “Then the outcome is that the opinion of the madhhab or the best opinion is it is impermissible to shave the hair and clip the nails, because the deceased’s parts of the body are something honoured, so no one should not taint it. There is no sahih hadith from the Prophet PBUH and the Companions on this matter, so the ruling of practising it is makruh”. (Refer al-Majmu’ Syarh al-Muhazzab, 5:179-180)

There is also an opinion which states that it is wajib to shave the deceased’s hair if it is hard to remove the hair colourant and for sure, this will make it more certain for the water to reach the scalp, mentioned in al-Manhaj al-Qawim bi Syarh Masail al-Ta’lim:

“Indeed, if the hair is coated with something attached and water cannot reach its root (hair) unless by shaving it, hence it is wajib to shave it.” (Refer al-Manhaj al-Qawim Bi Syarh Masail al-Ta’lim: 344-345)