IRSYAD AL-FATWA SERIES 558: THE RULING OF RESELLING AN ITEM BEHIND THE SELLER’S BACK 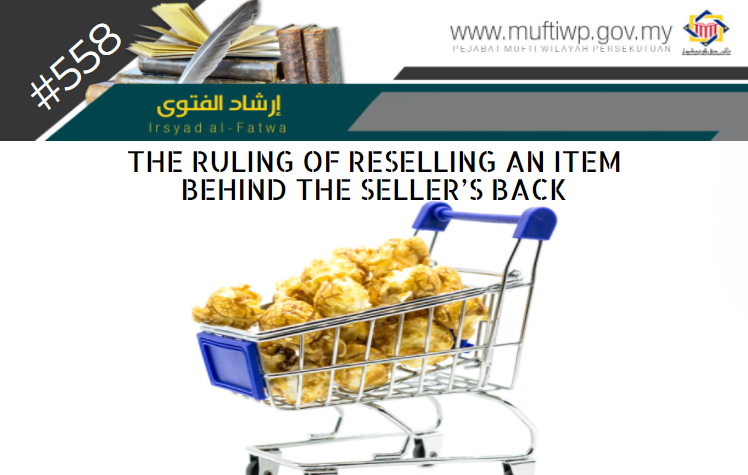 What is the ruling of reselling items without the knowledge of the seller?

The ruling of reselling items without the knowledge of the original seller is permissible if full ownership is obtained and if it is not, the ruling is haram.

Background of the Issue

Resell means reselling an item sold by a seller as the second person after the original seller. This situation normally takes place when a founder develops a product at a certain price with a limited number of productions, then a third party takes this chance by buying the product in large quantity and resells it at a higher price. Generally, a founder is the one who regulates the market price by stating the ceiling price for the sales of the product to avoid exploitation of price from the third party. Generally, the ruling of the situation can be ruled from several perspectives like the ruling of ihtikar and the ruling of reselling items not in possession.

Ihtikar is an action of hiding specific items. Ihtikar literally means suspending food until the price rises. While technically, madhhab Shafi’e defines ihtikar as buying basic needs during the time of crisis and suspend them to a period of time to sell them with a higher price due to the less amount of the items in the market. (See Nihayatul Muhtaj 3/456).

The original rule for ihtikar is haram as mentioned in the hadith of Prophet Muhammad PBUH narrated by Mua’mmar al-Adawi:

No one hoards but the sinner.

Ihtikar can be understood by hiding an item and reselling it when there is high demand with a higher price. Imam al-Ramli states in his book:

Ihtikar only happens upon basic needs related to food during that time where resources are very limited. This is mentioned by al-Syarbini:

“It is specified the prohibition of ihtikar upon staple food”

Selling Items Not in Possession

Selling items not in possession contradicts shara’ as the transaction may lead to haram actions like gambling and uncertainty. This is because the seller cannot guarantee any transfer of the item to the buyer because he does not have full ownership of the item. Next, among the condition of sales and purchase is people in the transaction should be the owner of the goods or exchange item, or act as the proxy like what is stated by Imam Ramli in his book Nihayatul Muhtaj ila Syarh al-Minhaj. Sales and purchase of items not in possession are stated in several hadith on the prohibition towards the transaction.

"O Messenger of Allah, a man may come to me and ask me to sell him something that I do not have. Can I sell it to him then go and buy it from the market?' He said: 'Do not sell what you do not have.''

Imam al-Muzani states in his book Mukhtasar al-Muzani that sales and purchase that is not yet owned by us means selling of products which have not fully given and accepted by us, even if the products are already bought, and the payment possibly is made. This prohibition is based on the hadith of Ibn Abbas where the Prophet PBUH said:

He who buys food grains should not sell it until he has taken possession of it.

All things are considered the same (in this regard)

"We used to buy food from troops of riders (i.e., the caravans) without knowing the amount, but the Messenger of Allah (ﷺ) forbade us to sell it until it had been delivered to us."

"In the time of the Messenger of Allah, may Allah bless him and grant him peace, we used to buy food. He sent orders for us to move our purchases from the place in which we purchased them to another place before we re-sold them."

The scholars of madhhab al-Shafi’e categorize selling of items not in possession under gharar sales and purchase. This is mentioned by Imam al-Muzani:

That is because they say, "Trade is [just] like interest." But Allah has permitted trade and has forbidden interest

Next, if the sales acquire consent between seller and buyer, then its ruling is permissible. Allah SWT says:

“O you who have believed, do not consume one another's wealth unjustly but only [in lawful] business by mutual consent.”

After analysing the above arguments, we can conclude here that the ruling of reselling an item/ product without the knowledge of the founder (main seller) is as the following:

However, we should not take others’ hardship as a chance to earn something because it is among taking others’ wealth unlawfully.