IRSYAD AL-FATWA SERIES 559: THE RULING OF OPENING A BEAUTY CENTRE 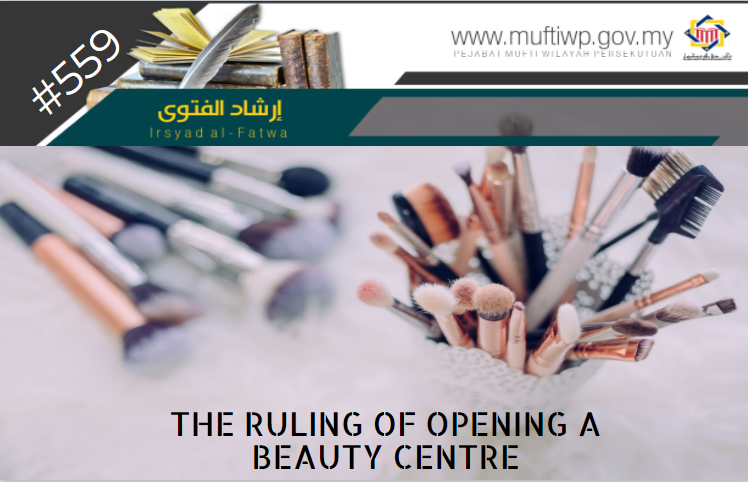 Assalamualaikum. I would like to ask. What is the original ruling of opening a beauty centre if it is specifically for women? Hope for an explanation from ustaz.

The ruling of opening a beauty centre is permissible as long as it does not provide beauty services which are prohibited or matters contradict with shara’. So, we state here some guidelines to open a beauty centre:

The evolving of the beauty world is exponential nowadays that many women do not adorn themselves in their house anymore, but rather choose beauty services provided in the beauty centres. Islam allows its ummah to adorn and beautify themselves minimally and without tabarruj (being excessive in adorning).

Adorning and beautifying oneself is the best deed before performing the prayer. This is mentioned in the saying of Allah SWT:

O children of Adam, take your adornment at every masjid

Besides, Allah SWT says in another verse on the permissibility of adorning oneself:

Say, "Who has forbidden the adornment of Allah which He has produced for His servants and the good [lawful] things of provision?"

Coming back to the presented question, the ruling of opening a business shall be seen to the original rule of the contract of muamalat among humans which is valid and permissible. (Refer al-Qawa’id li Ibn Rejab, pg. 340)

It is stated as such due to the saying of Allah SWT:

And when the prayer has been concluded, disperse within the land and seek from the bounty of Allah, and remember Allah often that you may succeed.

It is He who created for you all of that which is on the earth.

Based on the above statement, the ruling of taking a wage from services offered is permissible as decided by both the beautician and customer.

Besides, the permissibility of taking a wage from the beauty services is also mentioned in a legal maxim:

“The original (basic) law for everything is permitted unless there is an indication that shows the forbidden state of it.”

This maxim is a maxim to determine something which dalil is not stated, is halal. This is also based on the opinion of Imam al-Shafi’e that halal matters are matters with no dalil of prohibition. (Refer al-Mantsur fi al-Qawa’id al-Fiqhiyyah, Imam al-Zarkasyi, 2/70-71)

Therefore, based on the dalil mentioned above, opening a beauty centre is a business permissible in Islam aligns with the original rule of adorning itself which is something permitted. However, if the beauty centre commits something haram in adorning like drawing face tattoo, then the ruling of the beauty centre in that sense is haram. This is in accordance with the saying of Allah SWT, to avoid being considered as cooperating towards sins:

And cooperate in righteousness and piety, but do not cooperate in sin and aggression. And fear Allah; indeed, Allah is severe in penalty.

Adornments Which are Haram

Islam permits adorning and beautifying as long as it is not tabarruj or wasteful. Allah SWT says:

and do not display yourselves as [was] the display of the former times of ignorance.

Imam al-Qurtubi states in his Tafsir:

In addition, he also states that tabarruj originally is displaying something that is better to be concealed.

Islam put the permitted limitations in adorning which is as long as the adorning does not contain the elements of fabrication or change of the creation of Allah SWT. This is based on a hadith narrated by Abdullah bin Mas’ud RA:

Allah has cursed those women who practise tattooing and those who get it done for themselves, and those who remove hair from their faces, and those who artificially create spaces between their teeth to look beautiful, such women as altering the features created by Allah.

And the action is haram upon the doer and the one who asked upon based on the hadith. It is because the action is changing the creation of Allah SWT and fabrication and falsehood.

Besides, as a Muslim who opens the beauty centre shall always take the importance of the awrah between the same gender and even for different gender. It is haram for men to open a beauty centre for women and vice versa.

Therefore, we state here some guidelines for opening the beauty centre:

After analysing the arguments presented, we conclude that the ruling of opening a beauty centre is permissible as long as the centre does not provide beauty services contradict with shara’ like hair extension or using cosmetics which are harmful. This aligns with human nature to appear beautiful especially the women, but shall always follow guidelines of adorning set by shara’.