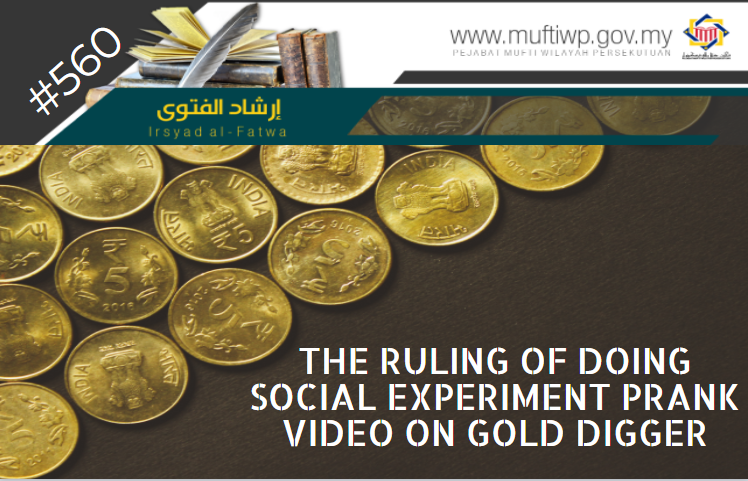 I would like to ask regarding the social experiment prank video on gold digger where this type of video content becomes more popular in YouTube. Does Islam permit such video?

Islam highly honours humans and obligates us to protect our own dignity, whatnot others’ dignity. So, it is prohibited and forbidden to make a video of such contents. A social experiment video on gold digger that goes viral recently on social media is a prank, which in some circumstances become inappropriate. Especially when it involves one’s dignity and honour, deceptions and trickeries as if to test the person, but only for monetary gain and popularity.

Literally according to Merriam-Webster Dictionary, prank means ‘to play a trick or prank on someone’. Based on the translation, prank can be understood as jokes or making someone a joke. While gold digger according to Merriam-Webster Dictionary can be translated as ‘a person whose romantic pursuit of, relationship with, or marriage to a wealthy person is primarily or solely motivated by a desire for money’. This term can be understood as a person who builds/ chases relationships due to being attracted to money which is the symbol of wealth.

So, the prank video on gold digger may be understood as a joke towards a person who views and desires money when building a relationship with someone. It is said that such video is made to test the spouse’s perseverance by using money as the bait, to do things that usually are personal (this method is popular among the spouses who intend to test their spouse’s faithfulness). Usually, this prank is recorded without the knowledge of the person, and only at the end of the video, it will be revealed to the one who is pranked. The objective of recording such video and sharing it on YouTube is to boost the rating and number of viewers in order to receive the bonus in monetary form. It can be said that a YouTuber uploads his video as a side income or full-time.

Morally speaking, recording or taking a video without one’s consent is totally prohibited and we should ask the permission of the person first. This is to preserve one’s dignity and to avoid unwanted problems like grudge and etc. In addition, if such video should be settled personally like marital issues, then is made viral and becomes one’s source of income, then it can be ruled as syubhah, or even haram as it is an act of gaining income by disgracing others.

Allah SWT creates humans as the best creation. Humans are bestowed with several specialities in comparison to other creations like in the saying of Allah SWT in al-Quran:

And We have certainly honored the children of Adam and carried them on the land and sea and provided for them of the good things and preferred them over much of what We have created, with [definite] preference.

In the above verse, Imam al-Qurtubi in his tafsir states on karamah insaniyyah bestowed by Allah SWT, that humans are given bountiful blessings. Among the highest blessing that Allah SWT bestowed is honour and chastity, in which these blessings do not exist in other creations. Besides, humans are also given intellect and the specialty of speaking in a perfect manner, to distinguish between good and bad as well as uttering good words. [See Jami’ Ahkam Al-Quran: 5/190]

Karamah insaniyyah means human dignity, covering one’s honour and chastity. A person has the same rights as other persons no matter what races or religion, the rights of honour, protected dignity and the right of privacy are preserved. These rights given to humans should be protected well. It is not rightful for us to degrade others’ dignity and honour for personal benefit and monetary gain. Whatnot to reveal others’ weaknesses and disgracing them in social media that able to spread rapidly without boundary.

The Prophet PBUH said in a hadith:

None of you should take the property of his brother in amusement (i.e. jest), nor in earnest.

According to the book ‘Aunul Ma’bud – a book commenting on Sunan Abi Dawud- the above hadith explains that if a person takes others’ stuff directly without having the intention of joking, it is prohibited because considered as stealing. Meanwhile if one takes the stuffs with the intention of joking, it is also prohibited because there is no benefit in doing so. In fact, it may cause anger and hurting the owner. (See ‘Aunul Ma’bud: 8/141)

Based on the above hadith, we can analogically deduce (qiyas) that joking or making a joke to someone without informing him is prohibited because it is feared may cause anger and other issues. Especially when the joke is regarding one’s humiliation which is concealed as an experiment subject. Pertaining to this, Islam highly prohibits the believers from spreading others’ weaknesses to the public.

It is narrated from Ibn Umar RA that the Prophet PBUH said:

For indeed whoever tries to expose his Muslims brother’s secrets, Allah exposes his secrets wide open, even if he were in the depth of his house.

Another example that we can take from this prank habit is bothering someone when he is relaxing or is tired for the sole purpose of joking or for fun. This is prohibited in Islam because it contradicts the saying of the Prophet PBUH in the hadith:

The Companions of the Prophet (ﷺ) told us that they were travelling with the Prophet (ﷺ). A man of them slept, and one of them went to the rope which he had with him. He took it, by which he was frightened. The Prophet (ﷺ) said: It is not lawful for a Muslim that he frightens a Muslim.

Based on the above explanation, we shall strive to preserve others’ aib like we preserve our aib, because Islam highly emphasizes on human’s honour. It is recommended that the YouTuber to change the content to more beneficial topics as well as away from fitnah. Remember that our life will never be in peace if we always spread others’ aib.