IRSYAD AL-FATWA SERIES 201: TRIBUTE FOR A DECEASED CELEBRITY OR ARTISTE 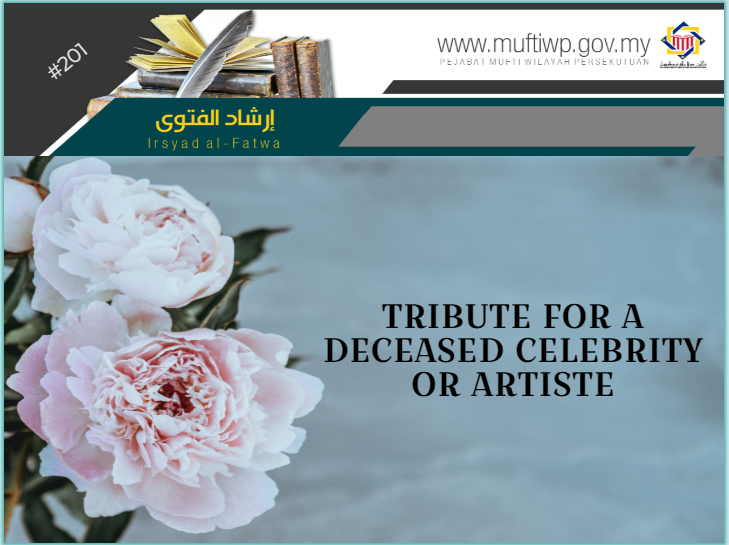 What is the ruling for tributes honouring deceased celebrities or artistes?

An artiste has asked us about the ruling of tributes honouring actors or artistes that have passed away. For example, P.Ramlee Tribute Award, or others like it. Is it permissible or not?

“an act, statement, or gift that is intended to show gratitude, respect, or admiration.”

It’s a form of a commemoration event, remembering a person that has passed away. In Islam, it is also known as al-ta’bin (التأبين) or al-ritha’ (الرِثاء).

The Ruling of Event Commemorating A Person that Has Passed Away

In our opinion, there are three rulings for ta’bin events or ceremonies, depending on how it is held:

These types of ceremonies are ruled prohibited, if the events are held to mourn or lament the passing of the artiste with excessive crying, adding to the sadness of the death. This is in accordance to a hadith from Ibn Abi Aufa:

Al-ritha’ is lamenting or praise for the deceased after he is buried. It is also understood as the sadness felt as a result from the death of the deceased, for what has happened to him. (See Lisan al-‘Arab, 14/309)

"He is not one of us who strikes his cheeks, rends his garment, and calls the calls of the Jahiliyyah."

This is the opinion of some Syafi’iyyah scholars. Imam al-Nawawi said:

“The author of at-Tatimmah (Imam al-Mutawalli al-Naisaburi) states, the ruling is makruh (undesirable) to praise a deceased, by mentioning his ancestry, attributes and past actions. The prioritized action is to make doa for him.” (See al-Majmu’ Syarh al-Muhazzab, 5/216)

“It is makruh to praise or lament the death of a deceased, on the prohibition of al-marathi.” (See Nihayat al-Muhtaj, 3/17)

This is the opinion of Hanafiah scholars and some Syafi’iyyah scholars. Muhammad bin ‘Ali al-Hanafi explains:

“It is not a problem to relocate a deceased before he is buried, and to broadcast his death, and to praise him through poetry or other channels, but it is makruh for it to be done excessively, especially beside the deceased (that just buried).” See Hasyiah Ibn ‘Abidin (2/239)

It is permissible if the event is just to commemorate his services, without excessive praises that could lead to deception, without lamenting and excessive crying. The reason is, even the companions and scholars remember others that has passed away, as stated by Imam al-Ramli. See Nihayat al-Muhtaj (3/17).

Citing the words of al-Mubarakfuri:

“Al-Marathi that is prohibited is when there is praises to the deceased, mentioning the good deeds and reawakening the feeling of sadness. Or if the remembrance is in groups or assembly or done numerous times. Even the Prophet PBUH himself mourn the death of Sa’d after hijrah (the migration of the Prophet PBUH from Mecca to Medina), without praises that would awaken the feelings of sadness. This is what has been stated by al-Qastallani.” (See Tuhfat al-Ahwazi, 6/253)

In a hadith by Anas bin Malik RA, he said:

The above hadith gives a description that whatever it is that are said towards the deceased is what is affirmed for the deceased. Thus, commemoration ceremonies held where people make doa for forgiveness for the deceased would at least ease the burden of the deceased in the hereafter and raise his standing towards Allah SWT.

We found that the Prophet PBUH himself mourns the death of Sa’d bin Khaulah saying:

“Sa'd b. Khaula is, however, unfortunate.”

Thus, it is clear that words of grief and sorrow towards the deceased is not prohibited on the condition that it is not excessive. Imam al-Nawawi Rahimahullah includes two hadith (Sahih al-Bukhari, 1367 and 1368) in the chapter “Praises for the Deceased” in his book Riyadh al-Salihin.

He said that, those praises are from ahl al-fadl or the salihin who have some virtues. The reason is, praises from them are true, for they are among the people that are guaranteed paradise as mentioned in hadiths.

Imam al-Nawawi also explains that there are two types of praises; whether it is a general praise or unconditional praise. For every Muslim that passed away, it is a form of blessing from Allah SWT if people or majority of the people praises him, for it is Allah SWT that inspires the speech of people towards him, and it is a sign that he is among the people of paradise, even if the praise is untrue. If the praise is untrue, it is uncertain whether he will be punished, for everything is under Allah SWT’s will. Hence, just by people praising him is a sign that Allah SWT wants him to be praised and a sign that he is forgiven. It is a clear, there are benefits in praising a deceased Muslim. This is the explanation stated by Imam Nawawi. (See Syarh al-Nawawi ‘ala Muslim, 7/20)

“al-Marathi where there are praises and doa for the deceased is not ruled as makruh. This is in accordance to what the Prophet PBUH did, where he praises companions that have passed away in various narrations of the scholars.” (See Gharib al-Hadith, 1/649)

Thus, in our opinion, it is permissible for tributes or commemoration ceremonies to be held to remember the services of someone who has passed away, on the condition that it follows the following guidelines: