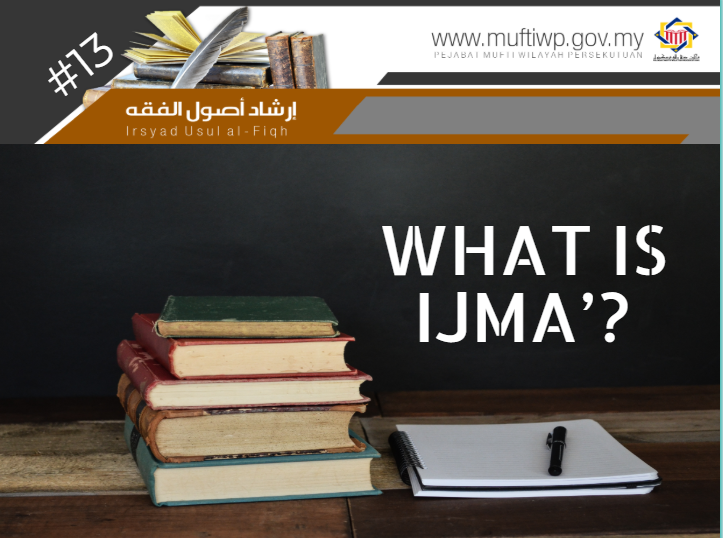 We often hear the claim that ijma’ happens in a certain issue. Whoever disagrees would be considered as someone who differs with the ijma’, which is one of the agreed four sources of rulings. The basis that we should all understand is the true meaning of ijma’ and matters related to it. Hence, in this series of Irsyad Usul al-Fiqh, we will discuss this issue further.

The Definition of Ijma’ According to the Fuqaha

Whereas, Imam al-Thusi give a different definition stating: (Ijma’ is) the agreement among the mujtahid in a certain time from among the ummah in religious matters. Refer Syarah Mukhtasar al-Raudhah, Sulaiman al-Thusi (3/5).

While Imam al-Zarkasyi Rahimahullah said: Ijma’ is the agreement of mujtahid from the ummah of Muhammad PBUH after his death in certain incidents for certain situations in certain matters in a certain time. See Bahrul Muhith, al-Zarkasyi (6/379-380).

Discussion Regarding the Definition Given by Imam al-Zarkasyi

According to the above definition stated by Imam al-Zarkasyi, there are several important points as the following:

Who Are Qualified in the Issue of Ijma’?

There are some scholars whose opinion will be taken into account in the issue of ijma’ and some whose opinion will not matter. As an example, if the issue is regarding a problem in fiqh, then the jurists’ opinions will be taken into consideration. While if it is an usuluddin issue, then the theologians must reach an agreement. The same goes, if it is an issue of nahu, then the Arabic grammarians must decide on an agreement to come up with an ijma’. Refer al-Bahrul Muhith, al-Zarkasyi (6/415).

Through our research, there is a limited number of books discussing this issue. Some of them are:

Lastly, our chosen opinion in the definition of the term ijma’ is The agreement of the mujtahid from the ummah of the Prophet Muhammad PBUH as a whole on religious matters and issues that happens in certain times. This is also the opinion chosen by Imam al-Thusi as stated above. We pray that Allah SWT will give us understanding in this issue. Ameen.