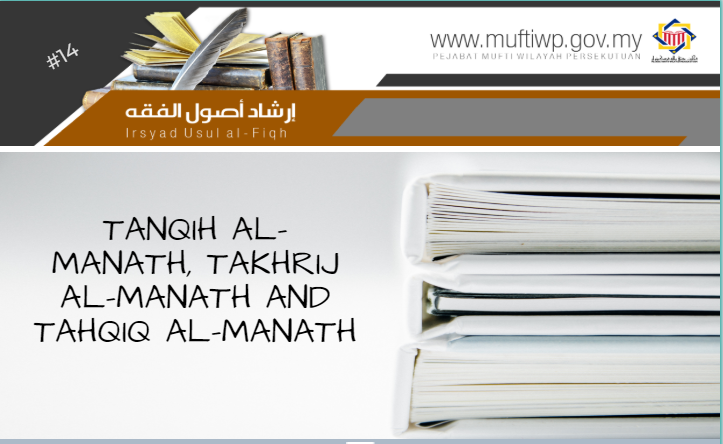 Whoever studies the science of usul al-fiqh, when he reaches the chapter of al-qiyas (analogical deduction) specifically regarding masalik al-illah (ways or methods to determine the illah), surely will encounter terms like tanqih al-manath, takhrij al-manath, and tahqiq al-manath on a regular basis. Hereby we explain in detail regarding these terms as well as the application of each of them.

Imam al-Ghazali Rahimahullah when defining on tanqih al-manath: Syaari’ (شارع) which is Allah already made rulings together with their reason as well as other criterions not related to the support of the ruling. Hence, those criterions are eliminated (not considered). Refer: al-Mustasfa, al-Ghazali (3/488).

While al-Imam al-Mawardi defines it as the process of ijtihad in determining the ‘illah in which Syari’ (Allah) link rulings with it. Hence, suitable criterions are maintained while those which don’t are eliminated. Refer: Al-Tahbir Syarh al-Tahrir, al-Mawardi. (pg. 3333).

Imam Saifuddin al-Aamidi states: Tanqih al-Manath is an evaluation process in determining the ‘illah where there is no specific ‘illah mentioned directly in the nas (evidence) by eliminating every non-related criterion which exists in the particular nas. Refer: Muntaha al-Suul, Saifuddin al-Amidi. (Pg. 218).

Dr Abdul Karim Zaidan Rahimahullah: Tanqih literally means: Correcting or differentiating. While Manath means: ‘illah or legal reason. According to the technical definition of the usuliyyun, tanqih al-manath means: Purifying ‘illah from criterions or attributes which seemingly related to the ‘illah while methodically not considered/included as one. Refer: Al-Wajiz fi Usul al-Fiqh. (Pg. 170).

Based on these four definitions above, we can comprehend that the nas already states the ruling of something. However, a number of criterions also come with that particular ruling which may be considered as the ‘illah. Then, a mujtahid applies some elimination process to remove criterions which are not related to the ‘illah.

“A man came to the Prophet (ﷺ) and said, "I have been ruined for I have had sexual relation with my wife in Ramadan (while I was fasting)"

In this hadith, a Bedouin purposely had intercourse with his wife during the day in Ramadhan. Then, he came and informed this matter to the Prophet PBUH. The Prophet PBUH asked him to do kaffarah due to this.

This hadith shows us that the ruling (of kaffarah) has its own ‘illah or legal reason. However, in this hadith, the specific criterion is not stated which indicates the true ‘illah for the ruling.

The reason is, it has not been arranged and the unrelated criterions are yet to be eliminated. Then, a mujtahid comes and he is the one who will extract the true ‘illah among those criterions.

Hence, a mujtahid will view and analyze those criterions, then pick only one of those to be counted as the ‘illah, eliminating the unrelated criterions. This process is named as tanqih al-manath which is one of the methods or ways to determine an ‘illah.

The jurists are divided in determining the ‘illah of the ruling for a particular hadith into two views:

Second: The Hanafi and some Maliki scholars said that ‘illah for the imposition of kaffarah is due to the action of dishonoring the month of Ramadhan.

Tanqih al-Manath is considered as the strongest masalik al-‘illah (methods to determine the ‘illah). In fact, Imam Abu Hanifah Rahimahullah also applies it in the issue of kaffarah although he rejected the application of qiyas in this matter. Majority of the Hanafi scholars also regard tanqih al-manath as the istidlal (the process of extracting rulings from the evidence). Imam al-Subki and al-Barmawi then said that tanqih al-manath is the best masalik al-‘illah. Refer: al-Mustasfa, al-Ghazali (3/490)

Takhrij literally means istikhraj (the process of extraction) and istinbath. While, it technically means: relating the ruling which syarak does not mention its ‘illah directly to the attributes/criterions which seem suitable in the observation of a mujtahid by applying the method of al-Sabru wa al-Taqsim. Refer: Syarah Mukhtasar al-Raudhah (3/242).

While al-Imam al-Zarkasyi Rahimahullah stated: Pertaining takhrij al-manath, it is a process of ijtihad in extracting the ‘illah for a ruling which is not originally mentioned in the nas or the ijma’. Refer: Al-Bahru al-Muhiith, al-Zarkasyi (5/257)

Dr Abdul Karim Zaidan Rahimahullah defined takhrij al-manath as: Extracting the ‘illah of the ruling which has not been mentioned directly in the nas and ijma’ through methods to identify the ‘illah like al-Sabru al-Taqsim for example. Refer: al-Wajiz fi Usul al-Fiqh, Dr. Abdul Karim Zaidan. pg. 171.

As an example, the Prophet PBUH said:

Based on the above hadith, it clearly explained the matters where riba (usury) is involved. So, it is under the obligation of a jurist to extract the ‘illah for riba which takes place for the particular matter and this is what is called as takhrij al-manath.

In other words, the process of reaching the conclusion for the ‘illah of the prohibition of liquor is its intoxication, ‘illah of al-wilayah (wali or legal guardian) in marriage is being young, the ‘illah which obligates qisas in first degree murders is he uses a dangerous weapon. This is what is called as takhrij al-manath.

Or we can simplify it as: There are rulings of syarak which are stated directly. However, its ‘illah for the prohibition is not included. Hence, a mujtahid should do ijtihad to identify the ‘illah for the stated ruling.

For example: Texts of al-Quran and hadith state the prohibition of intoxicants, but its ‘illah for the prohibition is not mentioned together in the texts. Hence, this process of extracting ‘illah is said as takhrij al-manath.

What is meant by tahqiq al-manath is the process of evaluating, researching and identifying to affirm the ‘illah existed in the texts, ijma’ or istinbath in situations or issues where there are no evidences that explained them.

One example is from the hadith of the Prophet PBUH is as what is narrated by Abu Qatadah RA where he said on cats:

“They are not impure, rather they are among the males and females (animals) who go around among you."

The above hadith clearly state the purity of cats and its saliva. It is also clear that the ‘illah for the ruling is it is an animal which live among humans.

However, is the ruling applicable for rats? So, this matter should be confirmed by a mujtahid through tahqiq al-manath in the process of applying the existence of ‘illah in branch issues.

Another example is the saying of Allah SWT in the Quran:

And they ask you about menstruation. Say, "It is harm, so keep away from wives during menstruation. And do not approach them until they are pure.

Then, a mujtahid makes an observation to confirm the ‘illah upon nifas. If he discovers that the ‘illah is the same which is impurity, then he will analogically deduce (qiyas) and take the original ruling to be applied to the furu’ (branch), which is the obligation of keeping away from one’s wife during her nifas.

Another example: ‘Illah for the prohibition of wine is intoxication. So, a mujtahid will do research and analyzation to confirm its ‘illah upon other nabiz (alcoholic drinks). If he finds out that the ‘illah is applicable upon it, then he will apply the original ruling upon the branch issue which is the prohibition of consuming it.

The similarity between these three is: All three of them are the processes related to al-manath or is said as ‘illah.

While the differences between these three are:

Hikmah (Wisdom): It is something that is logical. In this context, it is the same as ‘illah. However, what differentiate them is hikmah is not related to the ruling. As an example: Among the wisdoms of the sanctioning of fasting is to be able to empathize with situation and feelings of the poor as well as to control our desire and lust. This kind of wisdom is not related to the ruling.