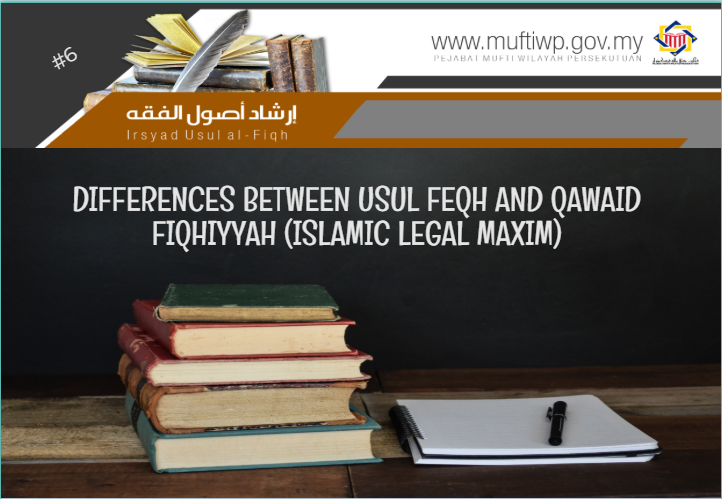 Assalamualaikum. Can Datuk Mufti give some explanation regarding the differences between usul al-fiqh and qawaid fiqhiyyah (Islamic legal maxim)? Jazakallahu khairan.

Differences between usul al-fiqh and qaedah fiqhiyyah can be understood by first understanding the definition each of them.

Usul al-Fiqh technically means: Knowing Fiqh evidences which are ijmali (kulliy) and ways to benefit from them as well as knowing the condition of a mustafid (mujtahid). Refer: Syarah al-Kaukab al-Munir (1/44).

According to the above definition, we can state that usul fiqh comprises of the following three scopes:

First: Usul al-fiqh focuses on identifying ijmal (brevity) evidences and they comprise of evidences which are agreed upon by the scholars and those which are not.

Second: The study of usul al-fiqh discusses on ways to benefit from those evidences. They consist of the methods of extracting the Shari’a rulings from evidences which are syar’ie like the imperative clause (al-amr), words of prohibition (al-nahy), general (‘am), specific (khas), absolute (al-mutlaq), qualified (al-muqayyad) and etc.

Third: This science also discusses the conditions of a mujtahid; an individual who deals with these syarak evidences. Among other things included in it are the issue of conflict and preference (al-ta’arudh and al-tarjih) as well as the fatwa because these are the roles of a mujtahid.

There are several definitions of qawaid fiqhiyyah stated by the jurists (fuqaha’). Hereby, we include the definitions:

Based on the above definitions, we can understand qawaid fiqhiyyah are: General rulings which are comprehensive and aghlabi (prevalent), in which through them the sub rulings are decided.

Hereby we share some differences between usul al-fiqh and qawaid fiqhiyyah:

First: Usul al-fiqh as mentioned in the definition is the general evidences, while qawaid fiqhiyyah are said as general rulings.

Second: The focus of usul al-fiqh is evidence and rulings, while qawaid fiqhiyyah focus on the actions of a mukallaf.

As an example, in the science of usul al-fiqh, there is a qaedah usuliyyah which states:

“Imperative clause is the indication of prohibition except if there is circumstantial evidence (qarinah) that diverts it otherwise.”

The stated qaedah clearly shows that the science of usul al-fiqh focuses more on the evidence and rulings. Hence, if we ponder upon the texts of the Quran or hadith which contain imperative clauses, then they indicate obligatory commands as long as there are no other signs that states otherwise.

While the example of qaedah of Fiqh (Islamic legal maxim) is as follows:

Third: Indeed, most issues of usul al-fiqh do not act as something that may lead to the reasons and purposes of its sanctioning. This differs to qaedah fiqh which lead to the path of knowing the secrets or wisdom behind the Shari’a rulings as well as serving the maqasid al-syar’iyyah both generally and specifically.

For example: Among the maqasid syariah are the protection of religion, life, intellect, property and dignity. To serve these five maqasid, qawaid fiqhiyyah plays an important role as follows:

Islam prohibits its ummah from harming anyone. This includes harms towards life, property, intellect and etc. Hence, there is a maxim which states:

Harm is neither inflicted nor reciprocated

Lastly, may the above explanation give us understanding of the differences between the science of usul al-fiqh and qawaid fiqhiyyah (Islamic legal maxims).